People are reading
You are at:Home»Columns»Notes from the Captain Lawrence Tasting Room»Notes From the Tasting Room, Vol. 6

Barley and the Chocolate Factory 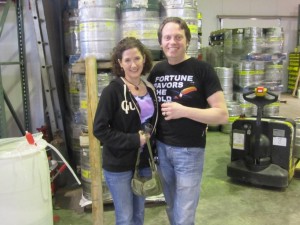 The beauty of the brewery tour, whether it’s Guinness in Dublin or Heineken in Amsterdam, or Captain Lawrence right here in Westchester, is that it’s a day at the brewery–plus an education. You walk out not only having sampled some of the freshest beer you’ll ever taste, but you’ve nourished your intellectual curiosity as well.

It is, in modern business parlance, a win-win.

And so I embarked on my first guided tour of the Captain Lawrence brewery, with a special wingman in tow. Every time I visit the place, with its silos and tubes and mouth-watering smell all around, I come back to reading about Willy Wonka’s beloved chocolate facility as a kid. And since my six year old son also adores Charlie and the Chocolate Factory, I brought the boy along.

Our tour guide John walks about 20 of us through the brewery’s modest beginnings (owner Scott Vaccaro, as a teen, brewing out of his parents’ home on, yes, Captain Lawrence Drive in Lewisboro), to the 8,000 barrels (a barrel equals two kegs) brewed last year, and the 10-12,000 that are on pace to roll out of the Elmsford digs for 2012.

My son Gavin enjoyed hearing about the malt being pumped in from the giant silo out front, and the hops mixed in, to create “the beginnings of beer,” as John put it. He enjoyed touching, smelling and tasting, samples of hops, staring at the silver skyline of brewing silos, hearing about the fermenting process.

But, let’s face it—the kid is 6, and it’s beer, not chocolate. Almost as if sensing my son’s flagging interest, John pointed to a hose spitting bubbles into a bucket. “The yeasts are living organisms,” he said. “They eat the sugar, and fart out CO2.”

Living organisms! Farts! Gavin’s eyes got wide. He grinned. He was all in.

John then walked us over to the experimental brewhouse; if that has a sibling over in Wonka World, it would be the Inventing Room, where stood a “mountain of gleaming metal that towered high above the children and their parents,” with “hundreds and hundreds of thin glass tubes” hanging over a giant tub—all in the service of creating the next crazy confection.

The Inventing Room spawned the famous chewing gum meal that did in poor Violet Beauregarde. For its part, the experimental brewhouse will soon start producing some creative brews—some of which may work their way into the regular lineup in the tasting room.

“It’s whatever our imaginations come up with,” said John, as if channeling Gene Wilder in the ’71 film. 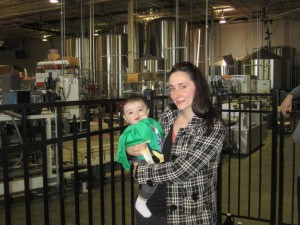 From there, it was on to the barrel aging station, where beers are stashed in wine, rum and bourbon barrels, among other infused vats, for up to a year. Then, finally, the kegging line.

My son tugged at my pant leg.

“What’s a keg?” he whispered. A fine mist coated my eyes; if only I could preserve him at 6.

The kegs represent the end of the line for a newborn beer, and the last stop of the tour as well.

We traded notes with our fellow tourists. Jason and Suzi Tipa of Millwood live to taste stellar beer. Both sported Guinness shirts and were quick to note that their last name is but one letter different from Double Imperial Pale Ale’s initials. One letter!

What did they learn? “I’d probably take a job here if I could,” said Jason with a wide smile.

Nada Tosto, having visited just about every brewery on Long Island, made the trip from Patchogue with her friends. She appreciated the Captain’s creative tendencies. “They try new things,” she said. “They have the standards that people love, but they still try seasonals and other out of the box things. You don’t see a lot of other breweries trying to be inventive.”

Charlie and the Chocolate Factory of course ended with a glass elevator, so it was fitting that the tour party made its way to the tasting room, to elevate glasses of Liquid Gold, Imperial Pale Ale, Ginger Man, Smoked Porter.

That was all boring grown-up stuff for my son, who simply wanted some chocolate.

Thankfully, a sweets-bearing bunny was due to arrive in a matter of hours.

The author is paid by Captain Lawrence, partially in beer, for “Notes From the Tasting Room.”