People are reading
You are at:Home»Restaurants»Openings»Farmer & The Fish – Seaside dining comes to Purdy’s

I’ve always loved the beautiful 18th century house that was once John-Michael’s and before that Purdy’s Homestead.  Its history dates back to 1775 when it was built by Joseph Purdy and in 1973 it was added to the National Register of Historic Places.

I’ve been watching the activity that’s been going on over the past few months with curiosity. The trucks, the people, all the equipment. My curiosity was finally sated with the opening of the new Farmer & The Fish,  a casual seafood restaurant with a menu reminiscent of one you’d find along a Cape Cod road.

Needless to say, I was as eager to try out the new restaurant as I was to see what changes had been made.  Stepping inside was almost disorienting as the bar is now at the opposite side of the restaurant and the interior walls have been removed to create a nice open space with the large stone chimney in the center.  Once I let go of how it ‘used to be’ I could see how this new space really suited  the new owners’ vision.  The décor is casual and inviting – and on this Tuesday evening (only a week and a half after opening) it was brimming with activity. Both the bar and restaurant were busy with a lively crowd of people thoroughly enjoying their food and conversation.  It had a very comfortable neighborhood feel about it and in fact, as I walked in I ran into several people I knew who all raved about the food. 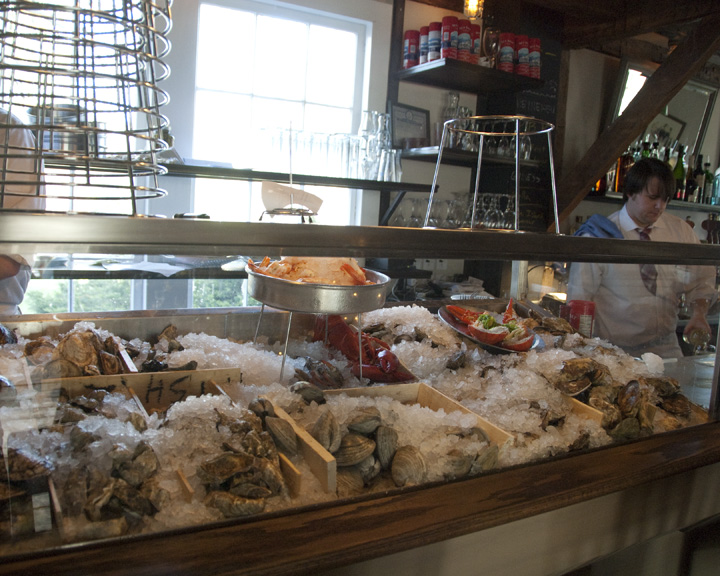 A very friendly waitress greeted us and our experience began. The menu features dishes like wild striped bass, lobster rolls, tuna burgers, fish & chips as well as grass-fed beef offerings and a nice raw bar selection.  The preparations are simple with some interesting little twists. For example, my lobster roll was quite light with big chunks of lobster and a very generous amount of it too. I love that it wasn’t heavy on mayonnaise as lobster rolls can sometimes be.  As I was eating it I tasted an herb that I couldn’t quite place, so I isolated a few shards to try to identify it. Sure enough, it was basil (this was confirmed by the waitress).  Basil is not an herb I usually associate with lobster rolls but it worked beautifully. Along with the diced cucumber, the light lobster roll had the primary focus on lobster – just as it should. 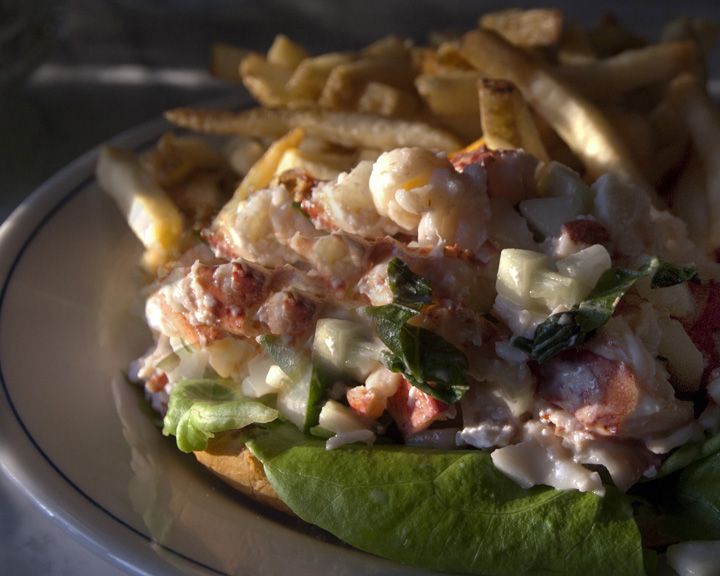 For a starter we had the lobster cocktail (notice a theme here) served over ice with a seaweed salad garnish. The lobster was sweet, fresh and perfectly cooked although I admit, here the creativity threw me a bit.  The seaweed salad on top didn’t quite work for me with the lobster and cocktail sauce.  Perhaps next time when I’m expecting it the flavors might be more appealing.  However, once I removed the seaweed from the delicious, fresh lobster, I was very happy indeed. 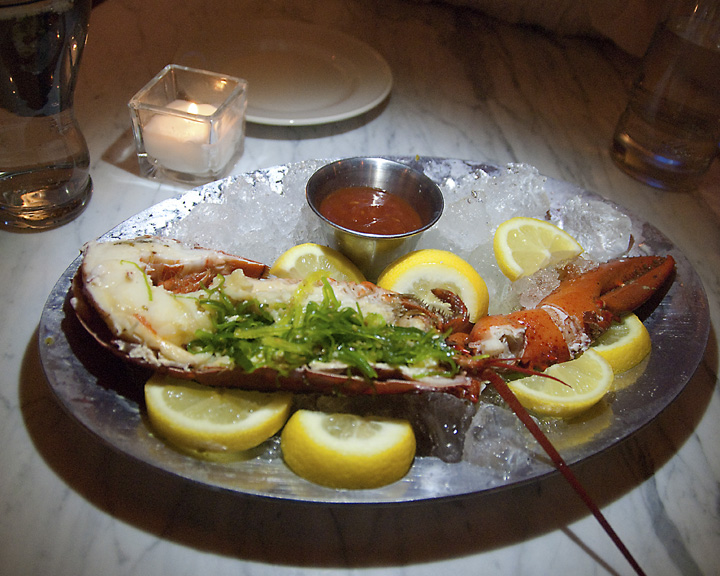 My friend Dorene  had the fish & chips, which had a nice, crispy tempura-like batter with four large pieces of fish.  Both the lobster roll and fish & chips were served with lots of fries.

Unfortunately, we had to skip dessert because at the time, only one dessert was available which was a chocolate ice-cream over a chocolate brownie with chocolate sauce.  Even for a chocolate lover like me, it was one chocolate too many.  I’m eager to see what the dessert menu will hold moving forward.

Edward Taylor, the owner, is no stranger to seafood and it shows. He owns a fish wholesale business, Down East Seafood in the Bronx and another casual seafood restaurant in Greenwich Village in the city simply named, Fish.  I had a nice conversation with the chef’s wife, Suzy who told me about the great plans underway for the restaurant, which include farming on the property, a farmers market and ice cream!  The farm will supply the restaurant and market – you don’t get much closer to farm-to-table dining than that.  The vision for the restaurant is a family-friendly, community-oriented space where people can meet and enjoy reasonably priced, high quality seafood. Personally, I think they are well on their way to just that.

Post Script – I think I’m officially a regular. I went again tonight (Friday) with my husband this time; I knew he’d love it.  Again, the restaurant was in full swing and by the time we left at around 8:00 there was a long line of people waiting to get in.  I stayed with the lobster roll which I thoroughly enjoyed and my husband had the Loch Duart salmon – an award winning, sustainable salmon raised in an environmentally conscious way that boasts exceptional taste.  My husband was in full agreement saying that it was absolutely superior in flavor. He really appreciated the simply yet very flavorful grilled preparation with a shallot-tarragon tapenade served over quinoa and greens.

Tonight we gave in to dessert minus one bit of chocolate, we had the brownie with vanilla ice cream and chocolate sauce – yum. 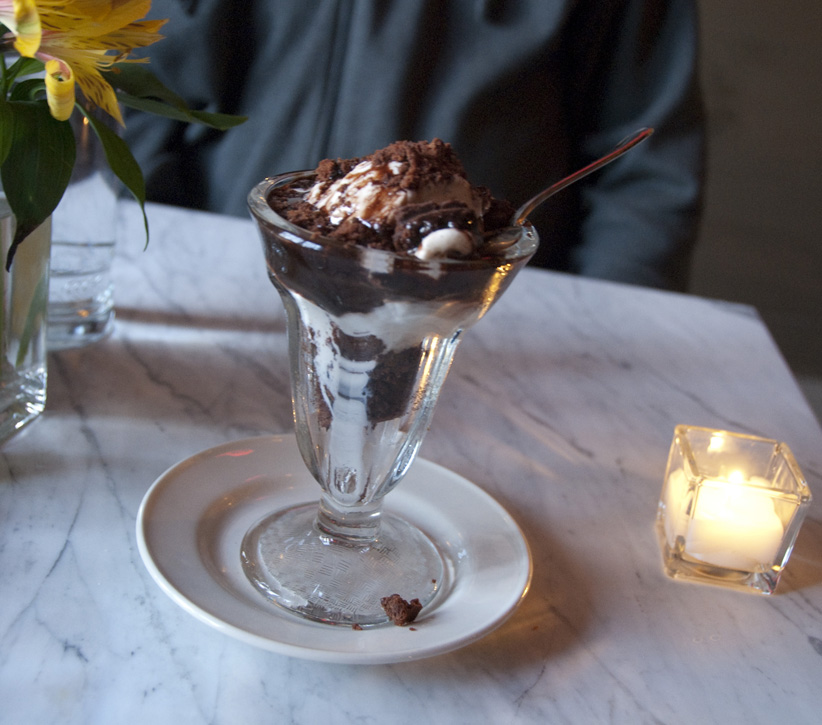 Oh yes, we’ll be back again, and again… To be sure.  -Margaret Rizzuto for Small Bites.

The Farmer & The Fish