People are reading
You are at:Home»Food Links We Love»Notes From the Captain Lawrence Tasting Room, Vol. 8 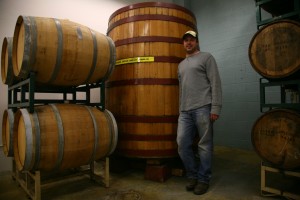 Big things are happening at Captain Lawrence Brewing, says owner Scott Vaccaro, most of them quite good. The four-month-old facility in Elmsford features an expanse of green space (well, greenish, at least), and plans call for benches, tables, and even a bocce court to be set up to enhance your beer sampling. (Bocce, involving heavy wooden balls, an asphalt court and, typically, older Italian men, is an even better partner to beer sampling than softball.)

The building permit for the outdoor space should be in hand this week. Captain Lawrence is also applying for a permit to serve beer outside.

And as you’ve probably noticed if you’ve been in a beer distributor or grocery store or Whole Foods recently, bottles are rolling out of the brewery, and into a retailer near you. Freshchester Pale Ale, Liquid Gold and the Captain’s Kolsch are currently out in six pack form, and Captain Lawrence Brown Ale hits the 12-ounce bottles for the first time this week.

This week should finally see some action in the new facility’s much ballyhooed experimental brewhouse. Finishing touches to the electricity and plumbing are being applied, the new vent stack will break through the roof, and the first brew should be underway this week. “It’s taken longer than expected,” says Scott, “as all good things do.”

The beer blogging community has been abuzz about what Captain Lawrence might stir up in the 15-keg experimental space. Scott isn’t quite sure yet, but says the short list includes offshoots of the Imperial Pale Ale-inspired Drew’s Brew, the black ale Five Years Later and a white or wheat IPA. It’s a game-time decision for the brewery. “Maybe we’ll do all three,” says Scott.

So it’s all smooth sailing for Captain Lawrence? Not so fast. Some onerous legislation has been passed down to craft breweries from Albany. The New York State Supreme Court, ruling on the Shelton vs. NYS Liquor Authority, has lifted a longstanding tax exemption for small brewers. (Shelton Brothers, a Massachusetts beer importer, is no stranger to litigation. It had previously sued the NY State Liquor Authority over some off-color Christmas beers, including a winter porter called Santa’s Butt, that the Liquor Authority sought to keep off New York shelves, believing Santa’s Butt was being marketed to minors.)

The short of it is, unless the lobbyists and lawyers representing New York’s growing craft brewing community can pull off a Hail Mary, it will be a lot more expensive for small breweries—those brewing 6.2 million gallons or less per year, such as Captain Lawrence–to brew and distribute their beers, and probably more expensive for people to enjoy these beers too.

Scott says the new law would mean close to $100,000 in extra fees for Captain Lawrence per year. “The New York State brewing industry is doing really well,” he says. “This is a great way to stop it.”

So if you happen to be chatting up your local elected official, you might mention this egregious new legislation to them.

You might also invite them down to the brewery for a locally brewed Pale Ale, Family Meal or Smoked Porter—as well as a game of bocce.