People are reading
You are at:Home»Restaurants»Delizioso Gelati Inspired by Favorite Girls Scout Cookies

A guest blog post by Carla Gambescia, owner of Via Vanti! in Mount Kisco:

To celebrate the 100th anniversary of the Girl Scouts of the USA and to support area troops, we at Via Vanti! Restaurant and Gelateria, located in the landmark Mount Kisco train station building have created five new and delizioso flavors of gelato – Italy’s more flavorful but lower fat version of ice cream —  inspired by our favorite Girl Scout Cookies.

Rather than taking a simple “Ben & Jerry’s” approach – chopping up and mixing in cookie pieces – we have crafted  gelati that actually taste just like what you experience when nibbling on Thin Mint, Samoa, Trefoil Shortbread or Tagalong.  Each gelato is amazingly true to the cookie.  My personal favorite is Trefoil Shortbread – which we have formally labeled “Trefoil Shortbread Cookie Batter”.  It is smooth & creamy and oh so very buttery!

In addition to this yummy gelati quartet  we are also offering  a bright, refreshing non-dairy sorbetto inspired by the special 100th Anniversary cookie – Savannah Smiles.  I love this anniversary cookie which tastes a lot like an old-fashioned lemon cooler.  Our Savannah Smiles sorbetto busts with zingy lemon flavor but also, remarkably, has the airiness of meringue … perfect for the warmer weather.

From Saturday, April 21 and the end of May, the Via Vanti! will donate to Girl Scouts Heart of the Hudson one dollar for every hand-packed pint we sells of any of these five flavors. A simultaneous “Sweet Rewards” program entitles any Girl Scout within five nearby service units who sells eighty or more boxes of cookies to a complimentary pint of gelato.  Among those Girl Scouts, the one who sells the highest number of boxes overall will earn both “A Year of Gelato” for herself – a pint a month for twelve months – and a celebratory pizza and gelato party at Via Vanti! for her entire troop. 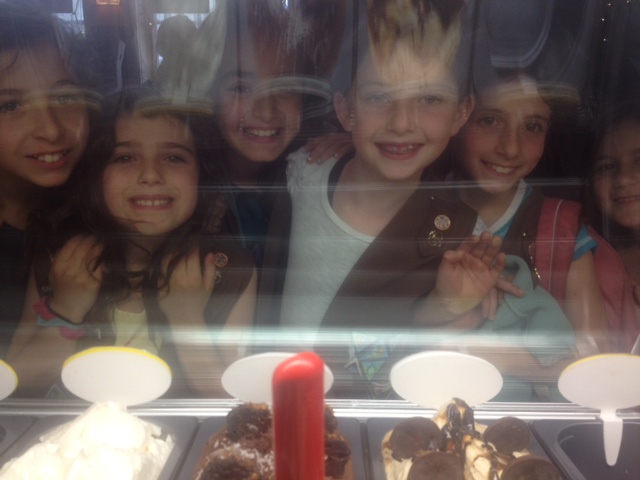 Gelato is perfect for celebrations, so this is a natural for such a BIG anniversary.  I still treasure my Girl Scout sash studded with 31 merit badges and the experiences I had as a Girl Scout nearly 50 years ago. The Girl Scouts have endured for a century because their core values of courage, confidence and character continue to be relevant, indeed essential.