People are reading
You are at:Home»Columns»I Eat Plants»I Eat Plants: An interview with Chef Daniel Petrilli of Haven in Pleasantville

I recently sat down for what I thought would be a traditional Q&A interview with Chef Daniel Petrilli of Haven in Pleasantville, NY. It was, instead, a lively conversation and discussion.  It turns out that Chef Petrilli loves talking about making vegan food. Which is great because I love eating it.

I reviewed my dining experience at Haven during Hudson Valley Restaurant Week 2012 and I was anxious to ask Chef Petrilli a very important question.

Why is your menu so vegan-friendly?

Chef Petrilli is not a vegetarian but one of his closest friends is vegan—a “pain in the neck” vegan, to be exact.  In Manhattan they could dine together easily – two of their favorite vegan restaurants are Candle 79 and Blossom – but when in Westchester, it was a different story.  His friend “complained” and he understood why.  She was served vegan options that lacked inspiration, from a plain plate of vegetables to a bland pasta dish.

Chef Petrilli is a big fan and admirer of Chef Peter Kelly and he wanted to take his friend to a dinner at Restaurant X in Congers, NY. He phoned the chef and requested a vegan tasting menu.  Chef Kelly accommodated and both Chef Petrilli and his friend ordered it.  “Chef Kelly really knew what he was doing.  I decided to take it as a challenge. Could I prepare a vegan dish as well as Peter Kelly? As well as Candle 79?”  Vegan items are now a permanent fixture on the Haven menu.

Born in the Bronx and raised in Yonkers, Chef Petrilli’s culinary career began “later in life, at the age of 34,” when he enrolled in the New York Restaurant School.  He went on to work with esteemed chefs Wayne Nish (March) and Larry Forgione (An American Place and The Grill Room).   He returned to Westchester where he has lived for 18 years.  Did his training prepare him to offer creative, plant-based cuisine? “No, but I just assumed all chefs made accommodations for vegans and vegetarians.” (Writer’s note: they do not.)

Chef Petrilli’s approach to vegan cooking is inspiring.   “To me, vegan is healthy.  It’s purity. It’s clean and straightforward.”  He continued, “Any chef can make something taste good with butter or bacon. What about straight-up vegetables and water? I love that challenge.”  He used to make two types of stock for soup.  Four years ago he moved to strictly vegetable stock. “It just didn’t make sense, when the vegetable stock was so good,” he explained.  I asked what he considered when approaching his plant-based creations.  “I like to work with textures to bring out different flavor profiles.” His signature vegan dish, White Bean ‘Meatballs’, is coated in panko and served over soba noodles and spinach.   This technique promotes one flavor, down plays another, and the result is a manipulated texture. “You get a crunch as you bite into the soft noodle and vegetable,” the chef described. 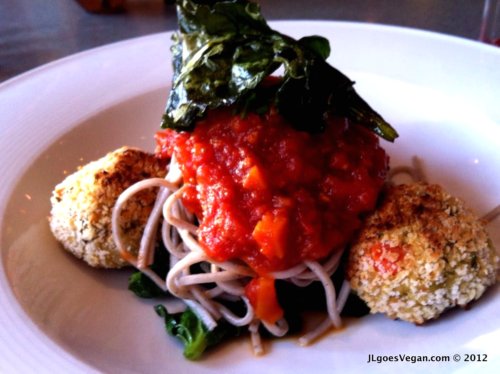 One of the most impressive things about the vegan offerings at Haven is that there is a plant-based option for every course. The chef’s response: “Vegan food has a special place in my heart.  Especially dessert.”  This is when I learned that Chef Petrilli is not only the executive chef at Haven; he is the pastry chef as well.   His vegan desserts are so good that his “pain in the neck” vegan friend always orders and eats her dessert as her first course when dining at Haven.  I have enjoyed several of the chef’s vegan desserts. 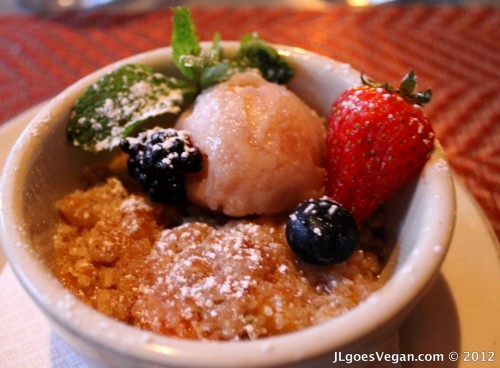 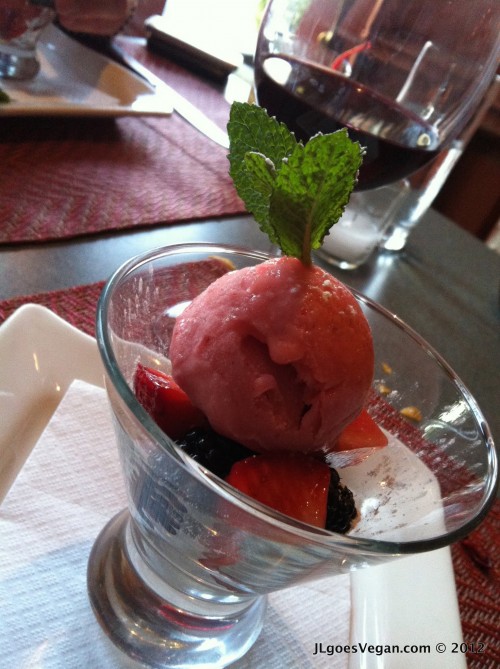 I asked Chef Petrilli to share a culinary tip with the home cooks among us. Truth be told, I almost demanded it. I am on a serious homemade vegetable stock kick and I wanted more details about his delicious soups. His advice on making vegetable broth or stock at home:

What can plant-based and veg-curious diners expect at Haven this spring? Chef Petrilli will introduce a Vegetable Samosa.  “I will include spring peas and potatoes and they will be wrapped in a spring roll,” he said.

Chef Petrilli has noticed a steady increase in the number of vegetarian and vegan orders over the last several months.  “As more meat-eaters order my vegan dishes, they just might get turned on to this type of cuisine.” This pleases the chef, who concluded, “It’s the future.”

I Eat Plants columnist JL Fields blogs about her transition to a vegan diet and lifestyle at JL goes Vegan: Food & Fitness with a Side of Kale. Her original recipes have been featured on Foodbuzz, BlogHer and Meatless Monday. She is the editor of the community blog Stop Chasing Skinny: Find Happiness Beyond the Scale.   JL is the founder and lead consultant for JL Fields Consulting.  She serves on the board of directors of the Woodstock Farm Animal Sanctuary and the advisory board of Our Hen House.  Follow JL on Twitter and Facebook.