When Georges and Eileen Zidi took ownership of Dish last July, many patrons were worried that their favorite neighborhood restaurant would be changing.  Together, with Georges in the kitchen and Eileen in the dining room, they have made the restaurant their own; and the welcoming atmosphere and menu staples that customers crave remain the quite the same.  Last summer, Eileen shared with me that it brings her “sincere happiness when friends and family come together to celebrate the moment over food and wine.”  (Last July, I wrote about Eileen and Georges’ story in the Small Bites guestblog post New Owners – Same Dish.)  I was delighted to recently spend a day with (the very French!) chef Georges Zidi behind the kitchen door at Dish. 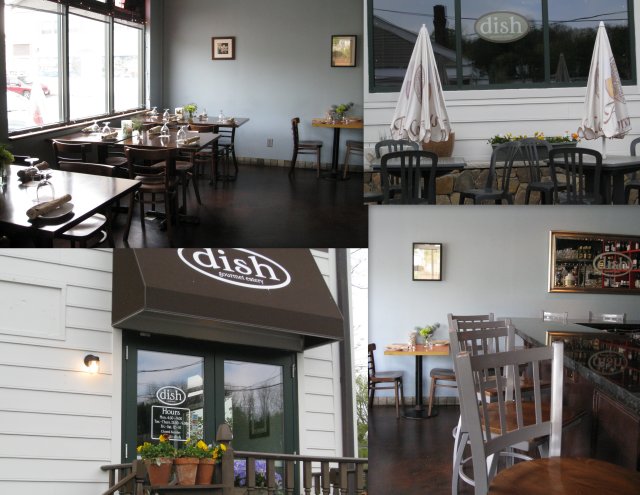 Description:  The restaurant is a neighborhood gem hidden away in the back of Mahopac Plaza off Route 6N (South Lake Boulevard).  It has a European bistro feel with only 29 seats and lively wrap around bar.  There’s always something new on the daily specials menu, but regulars can count on main menu favorites like the Rosti Alpener (a hearty Swiss dish consisting of a potato cake topped with gruyere and emmentaler cheese, caramelized onion, ham and an egg), Moules Pot (mussels in wine or red curry coconut broth) or the Mediterranean Platter (including hummus, babaganush, feta, and tomatoes).  The sincere hospitality of Eileen and her front of house staff draws customers in, and Georges’ menu keeps them coming back for more. 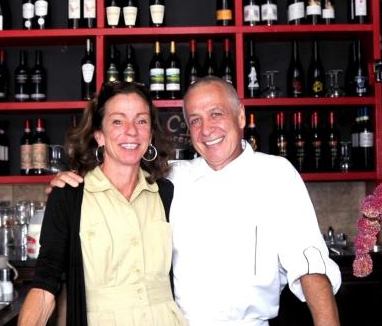 Cuisine: Georges describes his cuisine as New World and Traditional French and there’s also a farm-to-table element that Eileen (who is also a farmer) brings to the mix.  I have to be honest that I’m just not exactly sure what New World entails except that his menu items are clearly a harmony of flavors.  For example, the recent daily appetizer specials of a classic French Onion Soup, a Jerk Pulled Pork Sandwich and a Chorizo, Grilled Vegetable and Cheddar Cheese Frittata give a good indication of the variety.

Signature dish: Although the main menu stays pretty much the same, Dish’s specials change daily.  Georges won’t allude to one specific signature dish, but I can tell he has a sweet spot for the “traditionnel” French menu specials like Cassoulet and Coq au Vin.  And he’s extremely fond of the French Onion Soup, which is a two-day process (there are no short cuts in this kitchen!).

Bar scene:  I’ve never understood the draw of eating a meal at a bar until one evening my husband and I decided to sit at Dish’s bar.  There’s always someone new to talk to about what looks good on the menu, but cozy enough to chat with your dining partner.  Eileen and Georges are usually flitting about, and it’s so much fun chatting with them about my meal.  There’s a great selection of craft and imported beers on tap like the ones on their current blackboard list 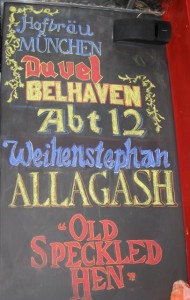 and some lovely wines by the glass or bottle that pair wonderfully with the menu.  Personally, I love that they offer small personal bottles of bubbly Prosecco.

Size of kitchen:  Georges counts in French and measures in metric.  The kitchen is about 5 meters by 7 meters and the American conversion for that is TINY.  Once you realize just how efficient this kitchen needs to be in order to execute menu items in such tight quarters, it’s daunting how quickly plates come out to the dining room.

Size of prep area:  The cold station/prep area is extremely compact. Space is obviously a commodity in this kitchen, so it is imperative to work neatly and meticulously. 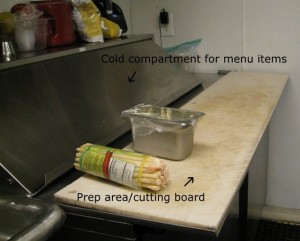 Turning up the heat: The main cooking area is a Southbend 36 inch six-burner range and oven. There’s also a small grill to the left of the stove. 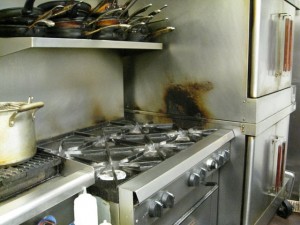 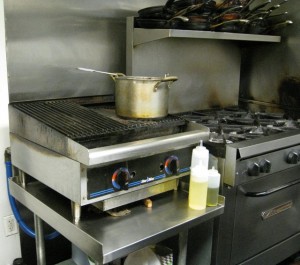 But it’s the double stack Vulcan convection oven that really got my attention.  There’s that circulating heat again, which not only helps to cook evenly but also saves energy.  How convenient that the doors open a full 180 degrees for easy access, and the racks can be positioned as needed. 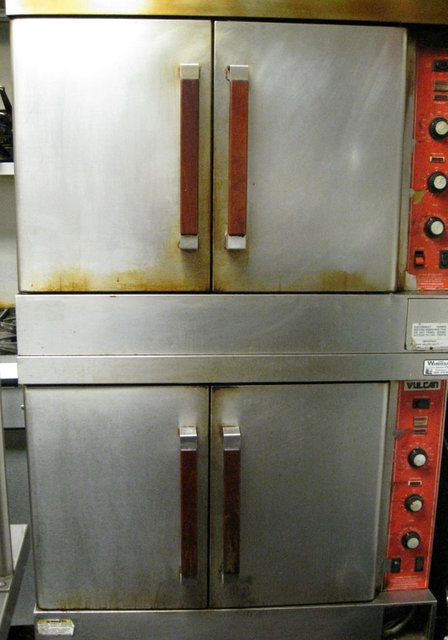 Chef’s favorite dish:  Georges loves both the Bucatini Pasta with Porcini Mushrooms, Artichoke, Escarole and White Bean Salad and the Red Snapper Filet with Green Thai Curry and Coconut Milk.  These are two of his favorites because the Italian and Thai cuisines are completely different from his French training.

Most complicated dish on the menu:  Very perplexing that this seasoned chef claims that everything is difficult.  What?!  Let me try to explain with a little chef joke that Georges played on me.  He took a fresh egg and asked me if I knew how to make it stand on end.  I watched him intently as he patiently placed the egg on the counter only to have it roll over time and again.  All the while, I’m very seriously thinking that the solution is something every chef should know.  Then, he quickly tapped the end of the egg.  Voila! There it sat. 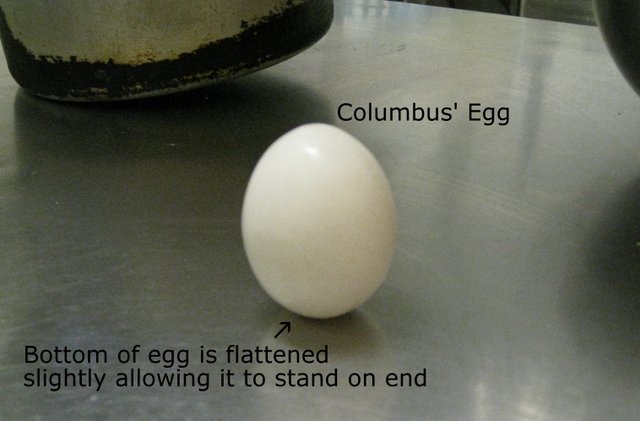 This brainteaser has its roots in a Spanish folklore story called “Columbus’ Egg.”  Now, stick with me because I promise that I’m going to close the tangent that we are in the middle of.  Spanish nobles told Christopher Columbus that if he had not discovered the Indies, another knowledgeable Spaniard would have.  He responded to this comment by challenging them to make an egg stand on end without aid.  After countless tries, the egg was returned to Columbus who did exactly what Georges did.  So, the moral to that long story is that once a difficult task is done and explained, it then becomes easy.  So, for Georges, all dishes are complicated to prepare correctly, even a simple hamburger, until they are mastered.  And even then, the real challenge is to do it perfectly every time.

Chef’s culinary mentor:  His first culinary position was in a pastry shop in his hometown of Rueil Malmaison, France, just 30 minutes west of Paris, for chef/owner, Renou.  During the 12 years Georges worked there, Renou gave him the opportunity to work as a stagiaire/intern in different restaurants all over France for two months out of the year.

Secret ingredient:  A shelf in the kitchen holds an arsenal of bags, jars, and cans of spices.  Along with his own collection, there’s a quite a spice trade going on as customers bring goodies from places like St. Maarten, India, and Thailand.  Georges became somewhat of a mad scientist as he gathered items like curry, porcini powder, fresh nutmeg (it was still in its shell), 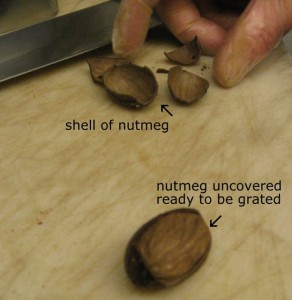 dried vanilla powder and saffron for the daily soup.  He ground everything up in his Vitamix (industrial blender).  The blend will be an interesting addition to the daily soup.

What’s on the prep list:  Turning a fresh-picked bag of nettles from Cabbage Hill Farm in Mt. Kisco into Nettle Soup was the first task of the day. 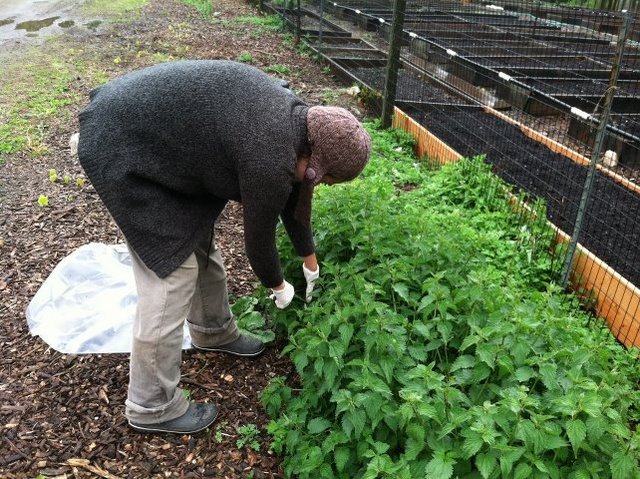 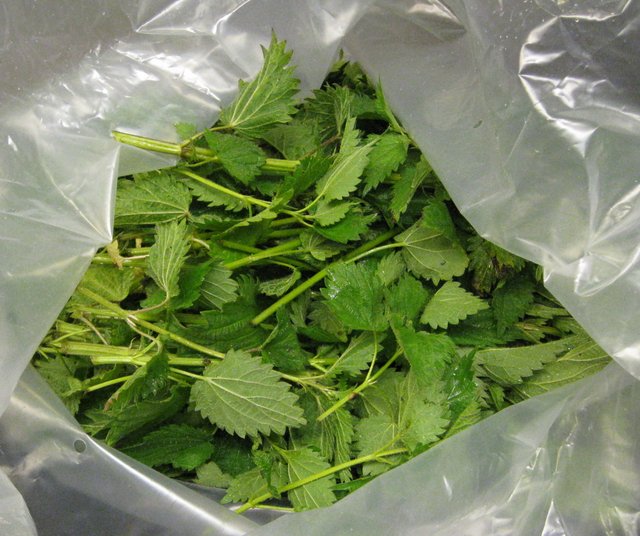 I had never seen nettles before and couldn’t believe these good-for-you greens (rich with vitamin A, C, iron, potassium, and calcium) could be such an angry plant.  Yes, I know that plants don’t have feelings, but angry is a very apropos adjective for the gazillion stinging hairs all over its leaves and stems (not to mention the annoying rash they cause). 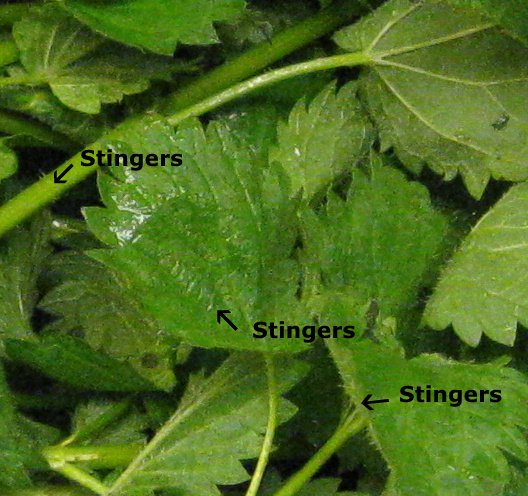 It was necessary for Georges to use his heavy duty gloves as he washed the bunch. 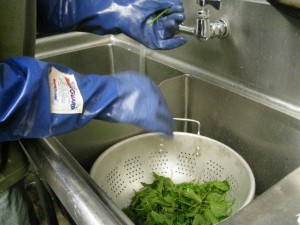 It almost seemed unfair that my task was to slice and dice the very docile potatoes and onions which were sautéed to start the soup. 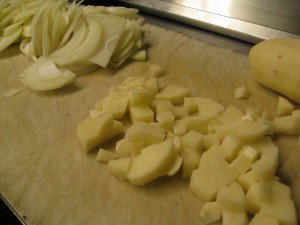 That combo of ground up spices were then added and cooked just long enough to release their fragrant essences.   Next, Georges wrestled the nettles into the soup pot. 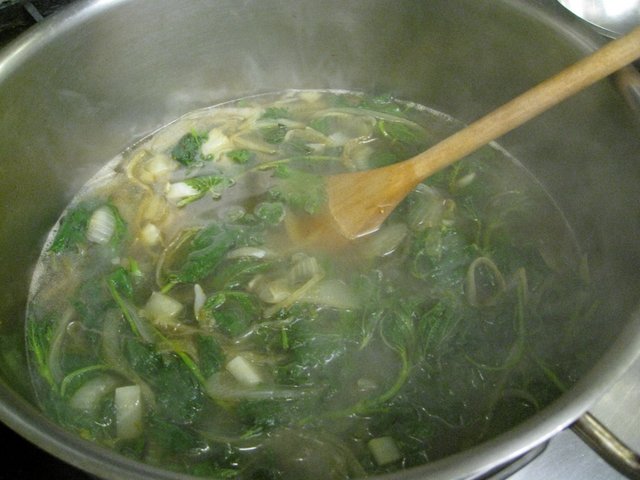 It’s hard to believe that these greens, commonly called Stinging Nettles, can be turned into a soup that is so velvety and lush (without an ounce of cream at that!).  The flavor is similar to spinach but without the bitey iron taste. 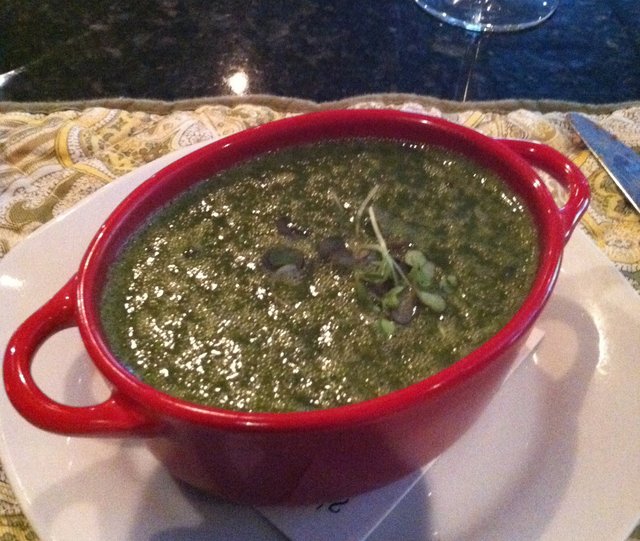 Favorite kitchen gadget: With his simple French peeler, Georges confidently offered a throwdown that he could peel faster than anyone else.  Any takers? 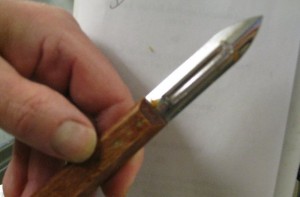 What’s cooking in the kitchen now:  I made a special request to learn how to make a French cake called a Gateau Basque, which became a favorite treat for my family when visiting friends in France.  The recipe came straight from Georges’ pastry chef friend in France.  There are many versions of this tart-like cake, including the addition of brandied cherries or jam; but for our first endeavor, we kept it fairly easy with just pastry cream.  Here’s some fun facts that I learned in my “gateau research”:  There’s actually a whole museum (Musée du Gateau Basque) dedicated to this regional dessert in Sare, France, close to the Spanish border.  The pattern on the top of the cake changes depending on the filling.  If jam is inside, you would find a Basque cross (sort of a rounded pinwheel design) or if it’s simply the pastry cream, like what we made, it’s a crosshatch pattern. 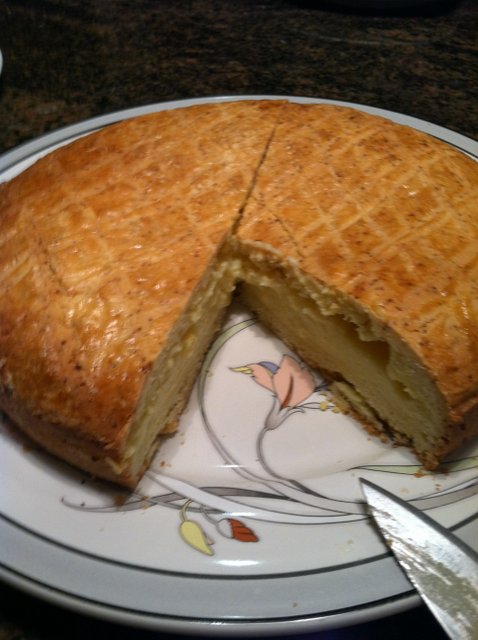 Georges was kind enough to give me the recipe to share (it’s in my next blog post) so you can make your very own Gateau Basque at home!

Advice for the home cook:  The most important item for a home kitchen is a sharp knife.  When Georges answered this question, I realized that he was reiterating what was frequently heard from other chefs.  Guiltily, I have to admit that I’ve hesitated to include this advice in my previous posts because I thought it was a bit dull (pun most definitely intended).  There are a few local places that offer sharpening services, like Kitch n’ Kaffe in Mahopac, and can make your old knives razor sharp.  Or, if you are in the market for some new ones, remember that they don’t have to break the bank, just make sure they are constructed well and comfortable to use.

Pet peeve:  In almost a whisper, Georges shared that he hates when chefs come in to work in his kitchen and take 20 minutes to sharpen their knives on a grinding stone.  In his mind, precious prep time has been wasted.  It takes no time at all to achieve a good edge on a knife using a sharpening steel.  Think of it as daily conditioning for your knife.  Gliding the blade up and down the steel at a 20 degree angle will smooth out the microscopic dents and pings that make a knife dull. 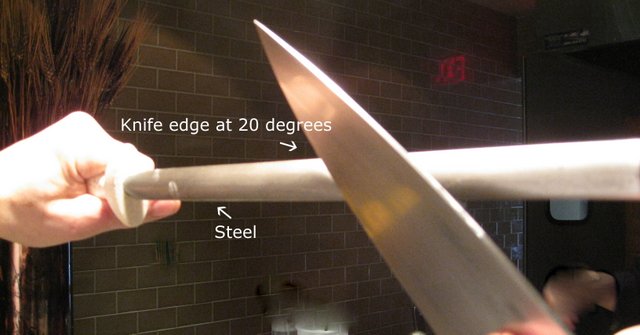 Get one for your home kitchen to keep your knives in prime cutting shape and ready to tackle slicing even the most stubborn tomato.

Music:  There were relaxing soft tunes from a French internet radio station.  It was nice to hear songs from the Beatles and Cat Stevens intermixed with French songs.

Patrice Costa is a passionate foodie who is on a personal culinary mission to learn it all from local chefs.  She looks forward to sharing her experiences as she goes behind the kitchen door in some of her favorite restaurant kitchens.  When not on foodie assignments, she can be found working in the open kitchen at Thyme Restaurant in Yorktown.