People are reading
You are at:Home»Food Links We Love»Westchester Magazine’s Wine and Food Festival: Cocktails with David Wondrich 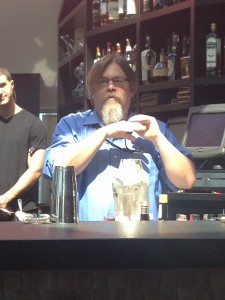 David Wondrich, the mixology sage, leads a Saturday seminar behind the bar at 42.

A dash of absinthe can perk up your Manhattan and a bit of grated nutmeg can add a welcome subtlety to a traditional punch.

So said David Wondrich, the Esquire columnist and mixology sage who hosted a Saturday seminar at Westchester Magazine’s Wine and Food Festival. With commanding views of the Lower Hudson Valley as a backdrop, Wondrich used the bar at 42 as his pulpit, preaching cocktail history and offering tips of bartending trade to an eager audience of 40.

I’m Ed Forbes, the digital editor at The Journal News and LoHud.com, and I was among the acolytes Wondrich took on a journey that began aboard British ships in the early 1600s and ended in today’s cocktail renaissance, Wondrich used four cocktails to outline the history and evolution of modern spirits.

“These people were English,” Wondrich, a former literature professor, quipped. “An English boat without beer or wine or something to drink is unthinkable.”

Combining muddled lemon rinds, lemon juice a bottle and a half of Jameson 12, a half-bottle of Madeira wine, water and freshly grated nutmeg, the punch was stirred over large chunks of ice and proved to be a perfect late-spring refreshment.

“Punch should be strength of sherry,” Wondrich said, explaining that it’s an inherently social drink that’s meant to be enjoyed in small cups at an afternoon or evening gathering.

Punches came to the New World along with British settlers, Wondrich said, and were de rigueur through the colonial and federal periods.

In the youth of the republic, Wondrich said, American ingenuity delivered the cocktail — early forms included the Old Fashioned and the Mint Juleps. Wondrich shared the Improved Brandy Cocktail as an example of a pioneering American cocktail.

“A cocktail was a pick-me-up, a morning drink,” Wondrich said. The latest theory in mixology lore is that the word cocktail derives from the phrase, “cock your tail up in the morning,” he said.

Adding equal dashes of Angostura bitters, orange curaçao and raw-sugar simple syrup with about 2 ounces of Martell’s VS brandy — all shaken over ice — Wondrich delivered a complex and satisfying cocktail.

After the end of the Civil War, cocktails became increasingly complex and increasingly common both in America and overseas. Victorian Americans delighted in Champagne concoctions, Wondrich explained, and began experimenting with a gamut of spirits — gin, brandy, Applejack, rye.

At the Manhattan Club, an establishment for silk-stocking New York Democrats, the Manhattan emerged from the genius of a bartender who mixed some of the club’s famed, aged rye with vermouth, which came in to vogue in the latter half of the nineteenth century. Variations quickly followed — the Metropole (cognac mixed with vermouth); the Turf Club, the Martinez and finally, the Martini.

“Many of you probably remember the Martini of the 1950s,” Wondrich mused, gesturing across the Long Island Sound to his native north shore. “When I was growing up, the bartender simply said the word ‘France’ when mixing martinis.”

Vermouth had fallen from favor in mid-century America. Worn by depression and war, the Greatest Generation liked their cocktails stiff. Still, Wondrich said it’s important to recognize the dynamic role vermouth can play in a cocktail. His third recipe was a Martini as it would have been served in the 1890s.

Combining equal parts Beefeater’s London dry gin and equal parts Noilly Prat French vermouth, Wondrich added dashes of orange bitters. Stirred over ice, the yield was a complex and rewarding appellation that confounded some in the audience who’d grown up in houses where vermouth was verboten.

As he likely does at every seminar he leads, Wondrich fielded the Bond question with grace.

“Why did James Bond not stir?” an attendee asked.

“The simple answer is James Bond is an idiot,” Wondrich replied.

Stirring, Wondrich explained, makes for a cold and less-diluted drink. Ian Fleming, he said, was writing about a secret agent who probably didn’t want a terribly stiff drink — Bond had to be on his game.

As he wove his tale of high jinx and high balls, Wondrich offered a few tips:
» Fuller bottles of bitters require heavier shakes to deliver satisfactory dashes.
» Traditional bitters — Angostura, Peychaud’s, orange bitters of whatever brand — are more often than not all a home bartender will ever require.
» Barspoons — long-stemmed spoons with shallow bowls — make terrific stirring tools.

Rounding out Wondrich’s survey of cocktails was the Singapore Sling. He immediately discredited the Raffles legend, in which the boozy boat drink was invented at the famed Singapore hotel in 1915.

“People were drinking pink gin slings in Singapore in the 1890s,” Wondrich said.

Wondrich’s sling used 2 ounces of Plymouth gin — a variety different from London gin — and dashes of cherry heering, Angostura and Benedictine. The sling was nothing short of delightful.

Ed Forbes is the Digital Team Leader at LoHud.com and The Journal News. He holds a master's degree from the Columbia University Graduate School of Journalism and a bachelor's degree from St. Lawrence University in Canton, N.Y. Prior to joining The Journal News in 2008, he was editor of the weekly Lake Placid News in Lake Placid, N.Y. He lives in Mount Kisco with his wife and their dog.