On first trip to Mexico (ah, back when I was just barely a teenager!) I was introduced to many experiences, including new flavors and ingredients: Jícama was one of them. I’d be lying if I said it’s since been in my repertoire. It’s one of those things that I recently rediscovered and, I’m happy to report, that these days I’m a full-fledged jícama fan.

You’ve probably seen this root vegetable before, but maybe you assumed it was its unrelated relative: the turnip. 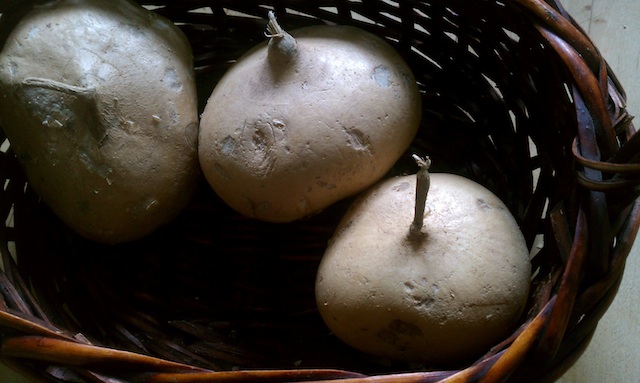 It’s available it many of our local markets (including Viva Grande on Huguenot in New Rochelle) and  I hope I can now get you to stop, pick up, and purchase—as I promise that this little baby will add another dimension to your salads!

In flavor, jícama (pronounced HEE-cah-mah) is perfect marriage of apple, cucumber, and water chestnut—and it’s crispy-sweet, and  thirst quenching. They’re usually about 4 to 8 inches in diameter, but range in weight from about half a pound, to wow, 6 pounds.   Oh—another of Jicama’s nice qualities: it can be enjoyed cooked (great in a stir-fry dish) or raw. In fact, in Mexico, it’s not uncommon to see people eating jícama with a sprinkle of fresh lime juice and chili powder  or hot pepper. 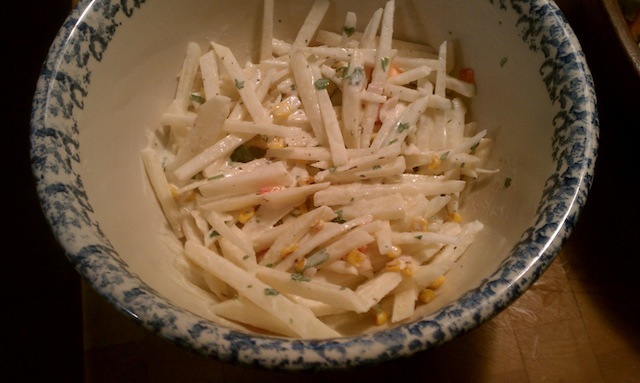 This colorful and tasty slaw is perfect for summertime barbecues! Also, you can make the yogurt sauce the night before you make the slaw. And finally friends, and yes this is the mom in me, it’s good for you! 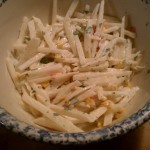 1 cup plain, low-fat  yogurt (I like the thicker Greek yogurt)

Combine the yogurt, 3 tablespoons of the lime juice, cider vinegar, sugar, cilantro, and cumin  and whisk to combine. Cover and refrigerate for at least 15 minutes, or up to 24 hours.

Combine the jícama, corn, shallot, and  bell pepper. Pour the remaining one tablespoon of fresh lime juice over the salad, and mix well.

Just before serving, combine the yogurt with the salad. Mix well. Season with salt and pepper, to taste. Serve immediately.