People are reading
You are at:Home»Restaurants»Restaurants We Love: Sonora in Port Chester

When a celebrity chef opens a new restaurant, you hardly expect him to pick up the phone at the place he opened a decade ago. Then again, Rafael Palomino is no ordinary celebrity chef. 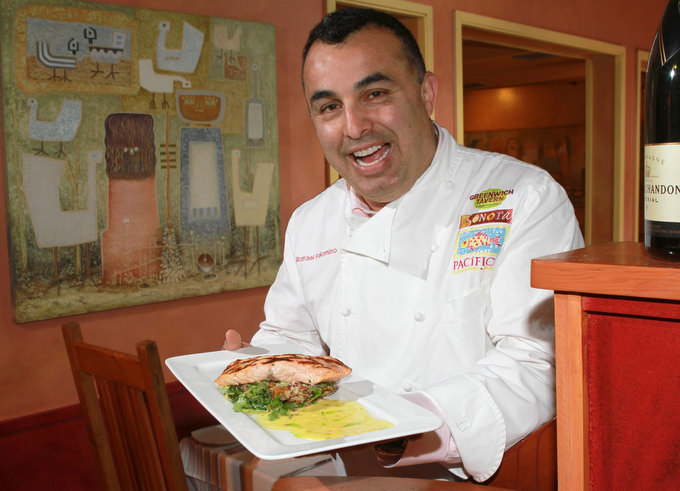 Even as he’s balancing the demands of multiple restaurants, including the new Bistro Latino in Tuckahoe, Palomino remains very much hands-on at Sonora, the Nuevo Latino restaurant he brought to Port Chester in 2000.

Palomino, who’s also a cookbook author and caterer, has built his reputation as a master of Nuevo Latino cuisine, a style of cooking that blends Latin ingredients with classic techniques and puts a modern spin on both.

When he opened Sonora, he chose the location carefully, he says, and the little white house with the red sign, tucked into a quiet side street far from the bustle of town, has remained a word-of-mouth sensation. 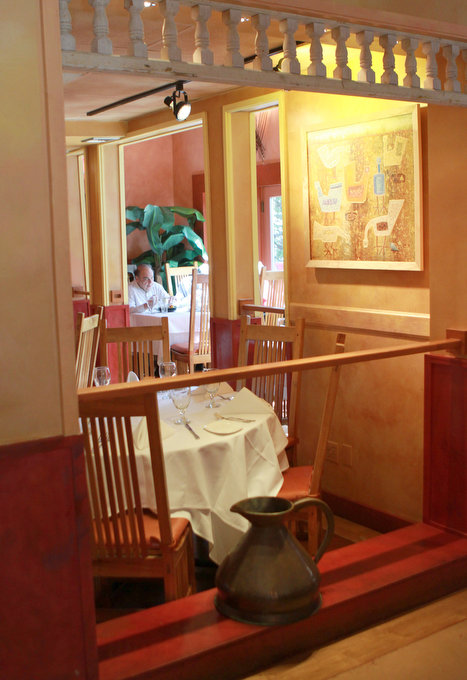 “By being in the middle of nowhere, you create a lot of curiosity,’’ says Palomino, who often answers the phone at Sonora, where he is executive chef (the chef de cuisine is Mario Tovar).

In fact, Sonora is like a sunny surprise from the moment you walk through the front door. With its warm orange walls and uptempo Latin music pulsing through the sound system, you feel the buzz immediately — and that’s even before you’ve ordered your first mojito.

The atmosphere is festive throughout — there are 145 seats on two levels — but there’s a warmer feel on the main floor, so if you don’t mind the loud music, make sure you ask for a table downstairs.

On a recent Saturday night, we hadn’t made any special requests, so we were escorted to one of the upstairs dining rooms, a cozy space with curved banquettes, tables accented by candlelight and plenty of staff ready to spring to action.

Though the music is more subdued upstairs, Sonora is the kind of restaurant that draws boisterous crowds ready to celebrate, and you can find these noisy groups no matter where you sit. In our dining room, there were couples and groups of four, plus a large party that included a crying baby.

Mostly, though, this isn’t the sort of place to bring kids on a weekend night — not unless their palates are sophisticated and you don’t mind springing around $25 for their entrees. 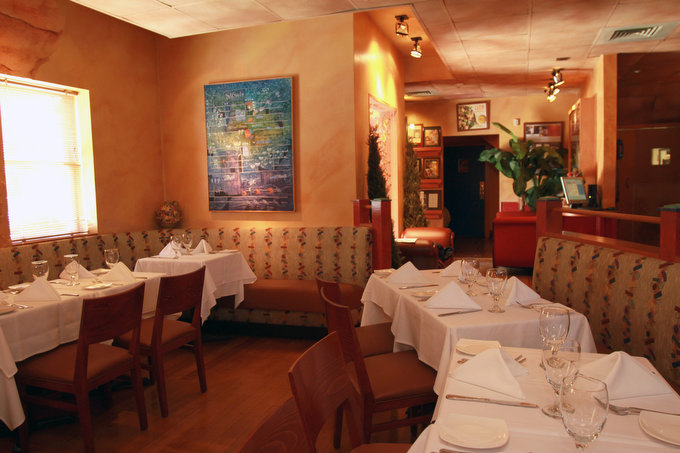 Palomino’s focused more on seasonal, local ingredients and has lightened up several dishes, steering clear of cream sauces. But the theme remains the same: Nuevo Latino cooking that reflects a wide range of culinary influences.

After ordering cocktails — for those who get tispy tipsy on a half a glass of wine, beware of the sweetly delicious guava cucumber mango martini — we started with two appetizers. From Peru, we tried the roasted eggplant, goat cheese and quinoa empanadas, served with a chocolate vinaigrette, one of those inspired flavor combinations that works perfectly, despite its seeming incongruity. And from Mexico, we couldn’t resist the guacamole prepared tableside — so good, we ended up ordering a second one (place a double order up front, and you’ll save yourself $5.50).

For the main course, we were hard-pressed to choose among dishes from Colombia, Spain, Chile, Argentina, Cuba, Mexico and Uruguay.

We decided on the Chilean salmon, a nicely grilled piece of fish served over a quinoa tabbouleh salad with shiitake mushrooms, sweet plantain and arugula, finished with a saffron-garlic mojito and chive oil (a laundry list of ingredients that again meshed together seamlessly). 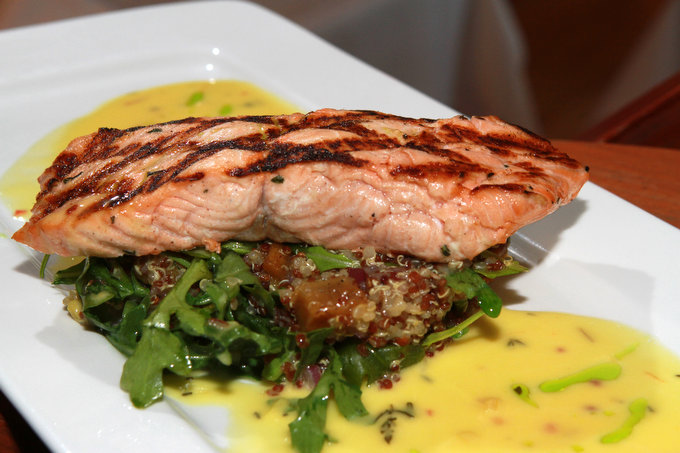 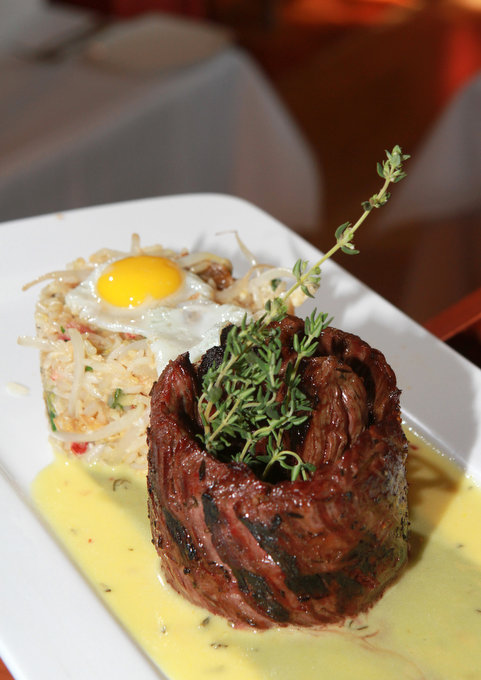 If you prefer a more tender cut of meat, talk to the wait staff about the other beef entrees (there’s an Argentine coffee-rubbed sirloin and Spanish-style braised short ribs).

Portion sizes are reasonable here, which means you’ll have room for dessert if you don’t fill up on the slices of grilled bread, served during dinner with a nicely flavored salsa. 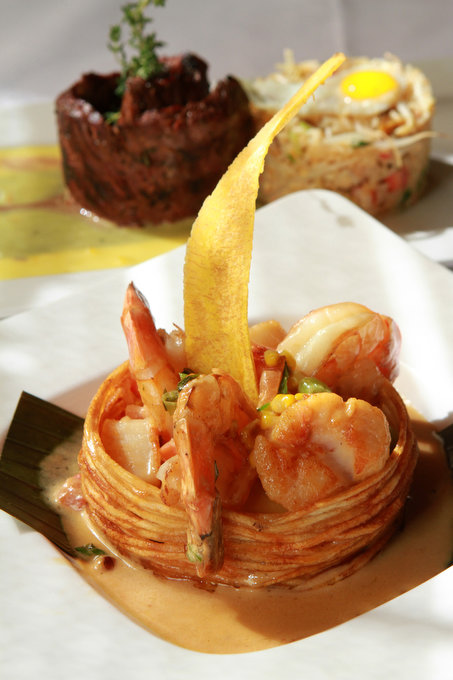 There are lots of choices, again from a host of Latin countries, including Mexican flourless chocolate cake and Argentine dulce de leche cheesecake.

We tried the passion-fruit flan, delicately flavored and adorned with bits of fruit, and a dessert that was said to be from the United States: a yogurt parfait with fresh fruit and coconut sorbet. It was a delicious end to a near-perfect meal.

Palomino has Bistro Latino, a brand-new restaurant that everyone’s buzzing about. But our dinner was practically flawless at a place he’s owned for a decade, and that’s even more impressive.

Sonora may have started out as a word-of-mouth sensation, but these days, it’s one of the best little sleepers around.

Good to know: A Cinco de Mayo celebration will be held May 4 and 5 with live music, dancing and a special menu. Also, there’s outdoor dining on a patio, already open for the season. Valet parking is available.