People are reading
You are at:Home»Food Links We Love»Notes From the Captain Lawrence Tasting Room, Vol. 15

Fathers, Sons, and an Invincible Partnership 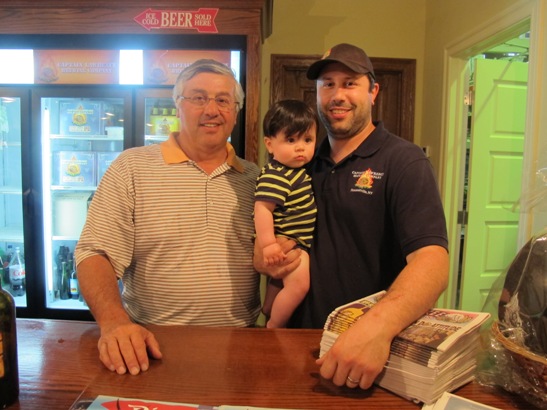 St. Vincent is the patron saint of charities, helping the poor and the suffering worldwide.

St. Vincent is also the guy who refrained from strangling his son when the kid told him he wanted to be a brewer, not an accountant, and helped build his son’s business into something world class.

The second lives in Westchester, and can be found at Captain Lawrence Brewing most days.

As Father’s Day approaches, it means the seasonal specialty beer St. Vincent’s Dubbel, a Belgian-style abbey ale, is available in the tasting room. It is of course named for Vincent Vaccaro, father of Captain Lawrence owner Scott.

After graduating with an accounting degree from Villanova, Vince had a long and satisfying career in tax consulting for PricewaterhouseCoopers, commuting into Manhattan for almost four decades. He was tickled when Scott began following in his footsteps—also studying accounting at Villanova.

Alas, Scott had other plans, which did not involve accounting, or Villanova–or the East Coast, for that matter. He wanted to study the science of brewing at the University of California-Davis.

“I wanted to choke him,” admits Vince.

But the kid was determined, and the two ended up flying out west to check out the setup in Davis.

Both were impressed by the resources and hands-on education available to students. “I was blown away by the university,” says Vince. “It was the real deal.”

Father and son agreed to some terms: Scott would finish his freshman year at ‘Nova, and once he started at U.C. Davis, he would not come home without a degree. And so Vince and Linda’s oldest child went west—two years at a junior college, two more at U.C. Davis’s prestigious brewing program.

Armed with that fermentation science degree, along with three years at Sierra Nevada, Scott opened Captain Lawrence in Pleasantville in 2006. Vince, meanwhile, would exit the train after a hard day of tax work, then ditch his suit jacket and pitch in to help get the operation off the ground, while handling the finances.

And when Captain Lawrence began its move into the expanded Elmsford facility last year, the newly retired Vince took over the title of construction manager—helping build the state of the art brewing operation from the ground up. While some new retirees sit around barking at their spouse, Vince was working side by side with his son. “It turned out to be perfect timing,” he says.

While golf may be the first order of business these days, as evidenced by his mid-summer tan, Vince is around 444 Saw Mill River Road most days—pitching in with everything from bottle labeling to the books to quality control, or watching his grandson Drew. “I think I’m one of the better tasters,” he says. “I’ll tell Scott if the Pale Ale is too bitter, or the Imperial IPA isn’t floral enough. I either get a thank you, or the ‘What are you talking about?’ look.” 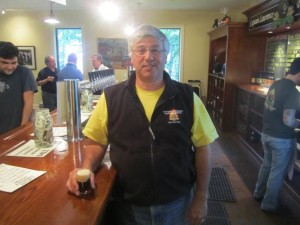 Back in his college days, Vince wasn’t much of a beer drinker, slugging local brews like Yuengling and Rolling Rock. After six years in the craft beer biz, Vince now prefers the Imperial IPA. “It’s a good, tasty beer—a little bite to it, a floral bouquet with the hops,” he says.

It being the season and all, Vince also enjoys the beer that’s named for him. He takes a case of the St. Vincent’s home and hoards it each year, he says, while also enjoying draughts in the tasting room.

“There’s a nice malty flavor, a little bit of smoke to it,” Vince says. “It’s very tasty, and goes good with anything grilled.”

Of course, it’s not every day one gets to sip a beer named in your honor. “I’m very proud,” Vince says. “It’s nice that Scott thinks of me that way.”

Captain Lawrence Brewing, at 444 Saw Mill River Road in Elmsford, is open Tuesday through Friday (retail 2-7 p.m., samples 4-7 p.m.); and Saturday, with retail and samples 12-6 p.m., and brewery tours at 1, 2 and 3 p.m. The author is paid by Captain Lawrence, partially in beer, for “Notes From the Tasting Room.”