People are reading
You are at:Home»Food Links We Love»Notes From the Captain Lawrence Tasting Room, Vol. 17

Dial K For Kolsch? Brewery Reading Goes Off Without a ‘Hitch’

Besides the usual olfactory notes of hops and barley, the Captain Lawrence tasting room had a literary whiff to it recently, as Steven DeRosa—author, screenwriter, film buff and tasting room regular—read from his book Writing With Hitchcock. 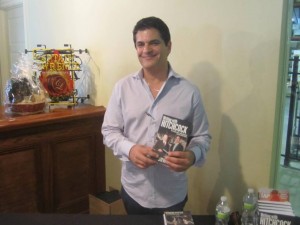 A Yonkers native, DeRosa says he was bitten by the film bug while attending high school at Iona Prep, with a special affinity for a certain horror director with a distinctive profile.

“Hitchcock was definitely the most written about filmmaker, but no one was writing about his screenwriters,” says Steven. “One stood out.”

That would be John Michael Hayes, who penned the scripts for the treasured Hitchcock films Rear Window, To Catch a Thief, The Trouble With Harry and The Man Who Knew Too Much.

Steven began looking into Hayes’ life and times a few decades ago, and stumbled upon a prime source for material. “I found out he was very much alive,” says Steven, “and had a good story to tell.”

He interviewed Hayes several times before his death in 2008. He also dug through mountains of Hitchcock’s personal papers and film studio archives, and interviewed surviving crew members from the Hayes-Hitchcock collaborations. DeRosa first published Writing With Hitchcock in 2001, and recently updated and reissued it.

Living in Valhalla, Steven is a familiar face in the tasting room, as is his pug–popping in Saturday afternoons to sample his preferred Captain’s Reserve Imperial IPA, among others, and chat about beer, film and life with the men behind the bar.

One such conversation led to a discussion of Hitchcock’s films, and his book, and ultimately an engagement to do “Hitchcock on Tap”—the first reading (not including the perusal of menus, beer lineups and articles about Captain Lawrence on the walls) at the tasting room. 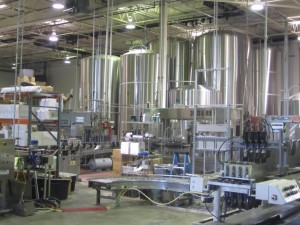 It’s a pretty good crowd for a Saturday. Cake’s “You’re Never There” pumps out of the speakers; if it were me, I’d mark a Hitchcock-themed reading with U2’s “Vertigo” or Talking Heads’ “Psycho Killer” —or maybe something by The Byrds.

A group of students from the “Understanding Movies” class Steven teaches at Mercy College has turned up. Katie Szeczesna, a pretty blonde from Poland, is double fisting—fresh glass of Kolsch in one hand, fresh copy of Writing With Hitchcock in the other.

“He’s crazy about this guy!” she says of her professor.

Katie’s favorite Hitchcock film is Rear Window. She’s picked up the book for her sister. “She loves reading in English,” says Katie. “It’s something different for her.”

Steven had asked his Facebook friends to come up with Hitchcock-Captain Lawrence mashups, and shares some of the better ones: Shadow of a Stout. The Man Who’d Brew Too Much. The Lager Vanishes. Punny stuff.

He reads a fun passage that depicts the first meeting between Hitchcock, the famed auteur, and Hayes, the obscure young writer. Hitchcock was way late for their dinner and Hayes, whom the book describes as a “neophyte” drinker, passed the time by downing martinis. When the imposing filmmaker finally arrived, Hitchcock ordered up double martinis for the two of them, then a little wine (white, then red), some brandy, and a spot of Drambuie.

Hayes was dazed, but rose to the occasion, breaking down scenes from the master’s pictures with painstaking detail and keen insight. Hitchcock remembered little of the meeting, but recalled being fond of the young scribe, and hired him to work on Rear Window.

The tasting room crowd takes it in like they’re watching a well crafted suspense film.

Steven takes his act to a more traditional setting (more seats, less beer) at Barnes & Noble on Union Square August 13 (Hitchcock’s birthday, by the way). His next projects include a book on Hitchcock’s unmade films and a biography of legendary producer Hal B. Wallis.

You don’t need six degrees of separation to connect Steven DeRosa to Hal B. Wallis. Wallis produced Casablanca, which of course starred Humphrey Bogart. Steven’s dog, who spends as much time at Captain Lawrence as his owner, is named Bogie— “a film reference,” says Steven, “not a golf reference.”

“Bogie’s almost 2,” adds the author, “and has enjoyed the tasting room since he was 8 weeks old.”