People are reading
You are at:Home»Food Links We Love»Seven Things I Learned from The Cake Boss 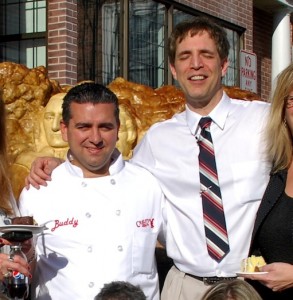 Lou Del Bianco, a Port Chester resident, was recently on an episode of “The Cake Boss” on TLC, which is about Buddy Valastro and his bakery, where they turn out crazy themed cakes among much drama in Hoboken, N.J.  Here, Del Bianco, left, standing with eyes closed (sorry, Lou!) with Buddy, tells us a few of the lessons he learned from being on the show, which focused on making a Mount Rushmore cake in honor of Del Bianco’s grandfather, who was the chief carver on the project. Take it away, Lou:

I’ve been an actor, singer and storyteller for 27 years, telling stories to people of all ages. The one story I’ve been waiting to tell my whole life is about my Nonno, my Grandpa. His name was Luigi Del Bianco and he was the chief carver on Mount Rushmore. After writing a book (with my wife, Camille Linen), a website, a screenplay, and one-man show, I thought, “What else can I do to get this story out there?”

The thought came when Camille and I were watching an episode of CAKEBOSS, a show about popular cake maker Buddy Valastro and his family. At 3 that morning, I jumped up out of a sound sleep and said, “Buddy should make a Mount Rushmore cake!”

Later that same morning I found out who the producer of CAKEBOSS was and I pitched the idea to them. What resulted was a nearly two-year odyssey and the wild ride that is reality television. I learned a lot from this experience. In fact, I think I learned 7 things being on “CAKEBOSS.”

1. JUST WHEN YOU THINK ALL IS LOST, SOMETHING GOOD CAN HAPPEN.

To me, the idea was a perfect fit; there were just too many great connections. Luigi Del Bianco was an Italian immigrant; the Valastros are a proud Italian American Family. Buddy is an artist; my Grandpa was an artist. Buddy loves telling a story with a cake; this story had never been told to America. How could they turn this down? Well, they did – four times for over a year.

As disappointed as I was, I decided to forget about CAKEBOSS and concentrate on the other irons in my fire. Then one day, I got a message from High Noon Entertainment that said they were VERY interested in doing an episode about Luigi Del Bianco and Mount Rushmore. I called them back right away and they couldn’t have been more enthusiastic; they already felt this wonderful story about an Italian immigrant carving an American icon would become one of the best episodes in the CAKEBOSS canon. Sometimes you just need to know when to walk away and let the universe take care of itself. 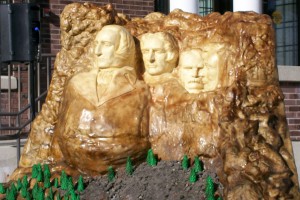 I had no idea what was involved with shooting live and onsite. So many variables were involved, particularly relating to the cake delivery. Is the event inside or outside? How big is the entrance? After the field producers looked at two theaters, a church and a park, we settled on the Port Chester Senior Center, a beautiful space in back of our village hall. Apparently, it had everything that was needed, so I was happy!

3. IF PEOPLE ARE INSPIRED, THEY WILL HELP YOU.

Once I knew the CAKEBOSS was on board, I had to create an “event” that would be the climax of the episode. When I told the mayor and director of our senior center what was planned, they were so excited and offered to help in any way they can. All it took was one conference call meeting to decide on “Luigi Del Bianco Day” in Port Chester. It was that simple and, honestly, long overdue. I was thrilled that Luigi’s adopted hometown was finally going to honor him.

4. BUDDY’S ARTISTRY AND RESPECT TOUCHED EVERYONE.

I wanted to make sure Buddy and everyone connected with the show would treat my grandfather’s story with the reverence and respect it deserves. Well, Buddy was not only respectful, he was sincerely touched. He got all the connections: immigrant, art, family, and country. When he shook my hand and said, “We’re going to get your grandpa the credit he deserves,” I knew he meant it. Thank you, Buddy.

6. THERE IS NO SIZE LIMIT ON CAKE BOSS

We planned to have Buddy deliver the cake in the main hall of the Senior Center. Two days before the delivery, the producers called me and said that Buddy wanted the Mount Rushmore cake to be bigger then the entranceway it was meant to go through. Apparently, Buddy was in his factory flailing his arms and shouting, “It’s not big enough! This is Mount Rushmore, baby!” So, as with anything to do with film or live TV, you have to be flexible. We changed everything and held the event outside the senior center so Buddy could make his cake as big as he wanted. It was big and beautiful and fed 200 people!

Between the producers, directors, camera, lighting and sound engineers, there had to be at least 20 crew people who descended on the senior center the day of the delivery. That doesn’t include Buddy and his crew, who delivered a cake that blew away everyone, family, friends and dignitaries, who were there to honor my Grandpa Luigi Del Bianco.

For more information on Luigi Del Bianco, go to www.luigimountrushmore.com or follow this link to Lou Del Bianco and Camille Cribari-Linen’s book, “In the Shadow of the Mountain.”