There’s a song that has the line “June is busting out all over.” We at the WBC don’t really know what that means either, but it was the only June-related quote that we could think of. But you don’t want us to quote song lyrics, right? You want us to talk about breakfast. Well that, my friends, we can do. Here’s a wrap up of the breakfasts we ate in June. Remember to check out our full blog posts at www.westchesterbreakfastclub.com. 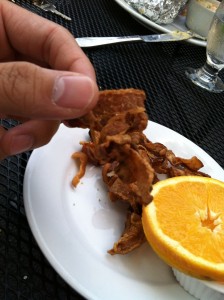 June 10, 2012: Justin Thyme’s been on our breakfast list for quite some time, so we decided to finally make it up to Croton for breakfast, and to find out who this Justin guy is anyway. We succeeded at only one of those things. The meal was a mixed bag. Sylvia enjoyed her brie and spinach omelette, even though the “side” of sweet potato fries dwarfed the omelette by comparison. On the other side, Jeff got run-of-the-mill French Toast and the saddest looking bacon you’ve ever seen. It’s not a good sign when an establishment can’t get bacon right, it being arguably the cornerstone of the American breakfast. Shelley was also disappointed by her Mediterranean wrap, which was a messy enterprise of watery hummus stuffed into a pita. There’s a reason hummus usually comes served in a bowl. And the food overall did not justify the prices. Fortunately Baked by Susan is right down the block to save the day. Here, the WBC enjoyed an assortment of delicious, fresh-baked desserts. 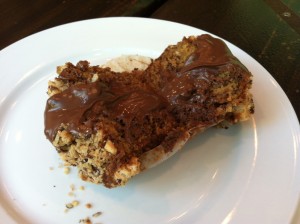 June 23, 2012: The heat left the WBC dropping like flies, so it was up to just Sylvia and Reid to head over to Cooked & Co. on Garth Rd. in Scarsdale. There aren’t too many breakfast offerings, but Sylvia’s breakfasty frittata and Reid’s lunchy chicken/mozzarella/onion compote sandwich proved solid choices in this cozy, charming, casual gourmet eatery. But, not everything was coming up roses this morning. Who doesn’t love Nutella, right? Well, the WBC doesn’t love Nutella when an entire jar is crammed into a single muffin. Cooked & Co. has a good idea for a crowd pleaser, but Sylvia and Reid agree that even Nutella is susceptible to the phrase “too much of a good thing.” 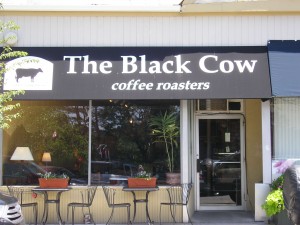 June 30, 2012: We were once again melting and, with the exception of Reid, not very hungry, so the WBC journeyed over to the Black Cow in Pleasantville. Here we enjoyed some simple pastries and beverages for breakfast, although only Jeff sampled the Cow’s coffee. Shelley and Reid both enjoyed hearty cinnamon muffins, which were more a cross between a cake and a muffin. Bonus points for the pomegranate green tea. (Ever wonder if green tea can be red? Well, add some pomegranate and it can.)  The prices were reasonable and the setting was comfortable. The Black Cow has brought to Pleasantville a perfect neighborhood coffee shop that provides a quainter alternative to a certain big-name chain coffee shop on the other side of the train station.

See you in August!