People are reading
You are at:Home»Columns»Spices and Seasons – Wineing with Spices

I am often asked how to pair drinks with spicy foods, the rule of thumb for me is usually taste. I often go by instincts but decided to do some digging to to see what I could in terms of fact finding and decided to reach out to Derek and Carol Todd, who run the charming wine store – The Wine
Geeks in Armonk, NY.

Given Derek’s background as the former wine director of Blue Hill at Stone Barns, I thought that the seasonal dimension of this column would appeal to him. I have to confess, first out I was very impressed to see how detailed he was about asking what information and suggestions I was looking for. He wanted to give me just the “right” information, the problem was that I was not sure what “exactly” I was looking for. With me and food, it often tends to be a general idea kind of thing.

We started with an assortment of questions back and forth and then decided to visit them to talk though our thoughts. It was a quite morning and a pretty one at that. I enjoyed the short water fringed ride to the store. 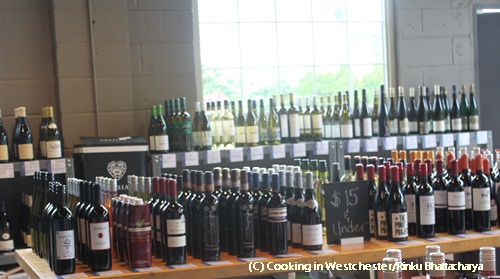 It took some time for us to decide on Spices and what we meant by the term. Eventually we decided that we should keep the emphasis broad rather than narrow.

In general, we agreed that a good food friendly wine in terms of food pairings was Riesling, since it married well with a lot of spices. The key Carol explained was in balancing the acid content, and a wine with a touch of sweetness such as the Riesling did just that. It balanced and worked well with the bouquet of flavors that could be found in a complex dish. Another wine they mentioned was lambrusca, and I used this information to keep trying glasses of this pretty wine on my recent visit to Spain. It certainly helped with both the heat and my spirits!

The general red compliment that they listed as a food friendly partner to spicy foods was a pinot noir. Good pinots tend to be my personal choice with Indian food, but our household is partial to red wines. They did highlight that with pairing spicy foods, it is well worth the effort to look beyond wines, highlighting the natural refreshing qualities of chilled beer and sake which worked well with most spiced dishes.

Chatting further, I gathered some good general wine tips that they felt were good overall rules of thumb: 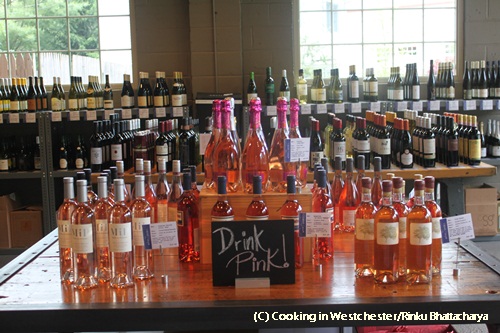 In terms of matching with spicy food, they also felt that it was important to focus on the spice notes rather than the base such as the protein or the vegetables, since this tended to take a secondary note.

They did add however, like most people who I talk to about this topic, if an individual does have strong taste preferences towards a certain kind of wine, they should indulge their palate rather than try to adhere by someone else’s rules.

To illustrate and leave us with an example of how he worked and paired with foods, Derek shares with us one of his favorite recipes, a coconut chicken curry from Padma Laksmi. A recipe he found from the food network and makes quite often. This recipe if we work through the ingredients actually offers a nice balance of flavors. It is in my mind a good example of nicely balanced curry.

Directions
In a blender combine the onion, garlic, ginger root, chili, lemon zest and water and blend until pureed.

In a casserole set over moderate heat, warm the oil until it is hot.

Add the paste and cook it, stirring for 3 minutes. Add the chicken, carrots and salt to taste, and cook, turning the chicken until lightly colored on both sides, for about 10 minutes.

Add the curry powder and cook, stirring and turning for 5 minutes. Add the coconut milk and simmer, stirring occasionally, for about 10
minutes or until chicken is cooked through.

Stir in the lemon juice and cilantro to taste.

I did try out the recipe and it was lovely, I added a touch of turmeric which is what gives my version a pale yellow color, I used my own spice blend (which I promise to share) and added the juice of 1 fairly juicy lime.

Both wines have very exotic spice notes to them which match the curry very well. The also have balanced fruit and acid to pair well with the dish. There are just a bit sweet which again works very well with this cuisine.