People are reading
You are at:Home»Food Links We Love»Notes From the Captain Lawrence Tasting Room, Vol. 21

Babes in the Brewery 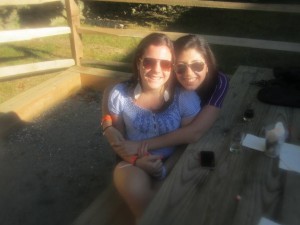 “Notes From the Tasting Room” has been a bit guy-heavy in recent weeks, with Evan Watson talking about beer, blues and football, Scott Vaccaro chatting about roasting pigs and jack-knifed pickup trucks, and a litany of lads opining on testosterone-fueled live music.

So I decided the new column would be all about the females who frequent Captain Lawrence Brewing. As I headed out to the tasting room on a perfectly sunny Saturday, I gave a quick check to Captain Lawrence’s Twitter feed; someone called @The BoozyBroad was “heading up to the 914,” she tweeted, where “growlers of Freshchester will be had.”

BoozyBroad confirmed that my female-focused instincts were on target.

Drinking beer has been a favorite guy activity since the caveman sampled his first brew, but anyone who’s been at a beer festival, or the Captain Lawrence tasting room, for that matter, in the last few years knows that females are increasingly well represented in the craft brew universe. Count Gina Signorile and Marissa Stanzani, both of Somers, among them. “All the girls I’m friends with drink beer,” says Marissa from a picnic table on the packed patio. “When in doubt, drink beer.”

Gina is sampling a St. Vincent’s Dubbel, while Marissa is making fast friends with Randy Shull’s new summer-friendly wit beer, which is flavored with lemongrass. “I love-love the Chico Loco,” she gushes.

Gina and Marissa may have penned what is the only song about the Captain Lawrence tasting room—a ditty dating back to the brewery’s earlier days in Pleasantville. They indulge me with a few bars of “Babies in the Brewery”–an ode to, as you might imagine, the presence of infants and toddlers in frontpacks and strollers or standing on tiny Keds while Mom and/or Dad enjoys a well deserved Captain’s Reserve. “Babies in the Brewery” has a chorus that’s catchy as hell, and the Gina-Marissa harmonies are lush; the verses, alas, have yet to be written.

Inside the tasting room, Kristien Del Ferraro of Stamford is enjoying just about everything in the tap lineup with her husband Dan. Kristien cuts a striking figure, giant peacock tattoo dominating one shoulder and a large red flower in her hair. Like Ms. Stanzani, Kristien is adoring the Chico Loco. “When I think of what appeals to women, I don’t necessarily think heavy beer,” she says. “This has wheat, it has citrus, it’s light around the palate, it’s good with food.”

Kristien and Dan know their food, and their beer: The pair run the Fairfield County food-and-drink blog OmNomCT.com. Kristien raises a compelling analogy—that craft beer tasting has become the new wine tasting: a high end sipping experience in a classy setting, and one with a fair representation of both sexes. “It’s opened up the market for women big time,” she says.

What else do the women like about the tasting room? The menu, especially lighter fare like hummus. “Girls need a little food to sustain themselves [while sampling beer],” says Karen Schaeffer of White Plains, who’s entertaining a couple of friends from Los Angeles. Speaking of grub, she misses the Family Meal–but is making do with the Liquid Gold and the Brown Ale.

While men might be content to stand in a room and drink—OK, clearly they are content to stand and drink in a room—women appreciate the patio. “Having the outside really opens things up,” says Karen. “You can hang out in here, or you can head out there.” 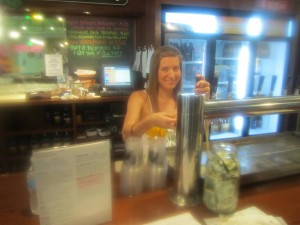 Fitting right in with our theme, there’s a rare female slinging samples in the tasting room; Emily Watson, smiling wife of Captain Lawrence guitar slinger/beer maker Evan, is taking her turn at the taps.

The women on this particular day mention a bunch of things they enjoy about a trip to Captain Lawrence: The hourly tours on Saturdays, which add a bit of variety to an afternoon in the brewery, and a few factoid takeaways. A tasting room that doesn’t smell like a fraternity house. One even mentions the “cute little sample glasses,” which also work perfectly with water and Advil, she says, after a night in the bars.

Suggestions? A broader menu. Chico Loco in the lineup year-round. A greater array of flora on the patio to obscure the fleet of Snapple vans across the way.

Then we hear from a dude.

“Stripper poles!” offers Matthew Ludwig of Myrtle Beach, sharing a table with the “Babies in the Brewery” singers.

Gina again shows her knack for the one-upping zinger.

“Channing Tatum attached to a stripper pole,” she says.

That earns a clink of the cute little sample glass from her pal Marissa.

Captain Lawrence Brewing, at 444 Saw Mill River Road in Elmsford, is open Tuesday through Friday (retail 2-7 p.m., samples 4-7 p.m.); and Saturday, with retail and samples 12-6 p.m., and brewery tours on the hour, starting at 1. The author is paid by Captain Lawrence, partially in beer, for “Notes From the Tasting Room.”