People are reading
You are at:Home»Columns»Spices and Seasons -Cinnamon

I often tell my students that to truly understand and savor spices, it is im 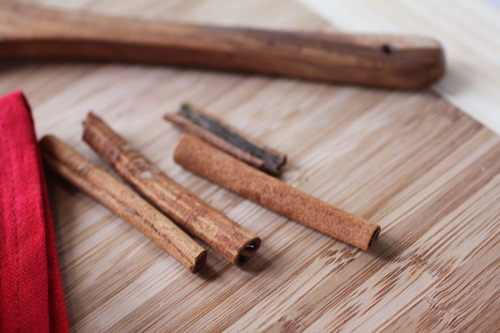 portant to savor them in isolation. The sweet tasting cinnamon that I am featuring this week is a very easy spice to taste in isolation. Its sweet tastes are fragrant and powerful. This being said, I have always been used to trying the spice in a boquet of spices, I shall tell you about the concept when we get to spice  blends.

So, cinnamon is native to Sri Lanka, a pearl shaped island of the southern coast of India, and therefore not surprisingly it is used extentively in the cuisine of Sri Lanka and South India. It sweet smoky flavors make it great for both sweet and savory foods. I usually keept this in the stick format and grind it as needed. So, in case the appearance has not given it away, the cinnamon is the bark of the tree.

I recently made a lovely one dish meal, a layered fish and rice dish or a biryani. This one is flavored with sour plums and is adapted from a recipe that I love. It is (yes, confession time) my grandmother’s recipe, that I have adapted. I keep here core flavors intact. It takes a little time to put together, but does place an elegant one-dish meal on the table without too much time. This weeks edition, I shall have to confession is more about the Spices and less about the seasons. In all honesty, people have been sick at home, so I have found a recipe from my archives that I can share with you. However, this recipe like many others in my kitchen features tomatoes as well. Tomatoes are such an important part of my repetoire and consequently the summer season, I ofen tend to short change its unique qualtities.

So, without much delay let me present the recipe,

This recipe is adapted from a traditional recipe, that my grandmother used to make with Hilsa fish. The rich omega rich texture of the salmon comes close to the Hilsa. The characteristic ingredient here is the dried plums or Alu Bukhara, and the tempering of mustard that is cha 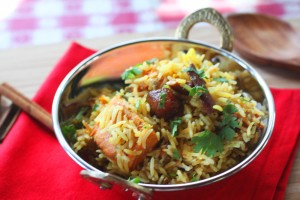 racteristic of her cooking, finished and rounded off with the cinnamon. I have simplified the recipe and made is somewhat healthier. This features in my kitchen this time of the year when the tomatoes are plentiful.

1. Wash the rice well, bring 3 cups of water to boil and add the rice and cook for 3 to 4 minutes.

2. Set aside to drain in a colander

3. Cut the fish into 2 inch pieces. Sprinkle with half the salt and turmeric, squeeze with the lime and set aside.

4.Heat half the oil and add the mustard seeds and wait till they pop, add in the cumin seeds and the tomatoes and cook until the tomatoes soften. Stir in the salt and the ginger and the salmon.

6. In a separate pan heat the remaining oil and add the onion and cook the onion, until it turns softly golden.

8. Gently add in the bay leaves and cinnamon.

9. Add in the tomato mixture in the center and stir lightly and add in a half cup of water.

10. Cover and cook on low heat for 20 minutes, until the rice is soft and cooked though.

11. Gently add in the ghee and turn of the heat.

12. Leave the rice tightly covered for 20 minutes before serving.

Rinku Bhattacharya is a daytime financial professional, who spends the rest of her time immersed in food. Rinku is the author of the blog, Cooking in Westchester, where she shares her life experiences, original recipes that combine Indian spices with produce from her backyard and local farmers markets. Rinku is blessed with a gardener husband, who always surprises her with a prolific and fresh supply of produce to keep her creative instincts flowing. Rinku has been teaching recreational cooking classes for the past six years, and has found her classes a great way to teach and learn. Her cookbook the Bengali Five Spice Chronicles, is scheduled to be published in November 2012. Rinku can be found on facebook, twitter and pinterest.