People are reading
You are at:Home»Restaurants»Rockland Restaurants near the Maccabi Games Venues

Here are a few recommendations for family-friendly restaurants near the venues for the JCC Maccabi Games, which will bring together more than 1,000 Jewish teen athletes from around the world for competition and camaraderie from Aug. 12-17.” 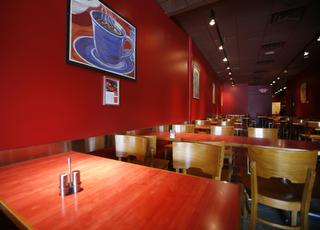 The Purple Pear (right): Kosher food is served in a modern setting, with hand-written notes on blackboards, red walls and cobalt fixtures. Try the French onion soup in a bread bowl, tilapia with a lemon-pepper sauce topped with Terra chips and potato sticks or the fries, which are served in a whimsical metal cone. 106 Main St., Monsey, 845-352-5262.

Sutter’s Mill: At this popular pub, you can order a Guinness, sit back, and watch your favorite team. The menu offers typical bar food, including a great selection of appetizers and gigantic burgers as well as killer wings. 214 Route 59, Suffern. 845-357-6556, http://suttersmillsuffern.com.

Waterwheel (below): Once part of a working mill, this restaurant boasts a cozy, rustic pine interior with tasty, home-style food. Recognized as a historic site, it is a perfect place to take the kids to eat and to teach them a bit of history. Try the Maryland crab cakes as an appetizer and then the waterwheel chicken (grilled chicken breast with fresh mozzarella, chopped tomatoes, and olives served over penne pasta) as your entree. Don’t fill up though. There are great desserts. 272 Route 59, Tallman. 845-357-3725.http://www.waterwheelrestaurant.com. 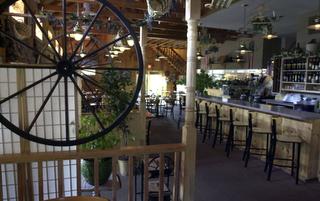 Blu Fig: A casual but upscale-looking brick-oven pizza place with small plates, salads and pizza. There are walnut tables, blue and grey mosiac tiles and a big brick oven in the center of the restaurant. Plus, outdoor dining under market umbrellas on the limestone patio. 191 S. Main St., New City. 845-708-5686, http://blufig.net.

Chickpeace: Yes, the name is a play on the main ingredient in hummus: chick peas. Max Miara, his two nephews (one of whom owned a restaurant in Israel) and his sister (a former caterer who worked from home in Monsey) are cooking up a storm at this glatt Kosher restaurant, where the specialty is falafel, served with hummus, parsley and spices. Another favorite dish here is shawarma, which is chicken in Mediterranean spcies cooked slowly on a spinning skewer over a low heat. And the salad bar is sure to become famous. Order at the counter and pick out a drink from the coolers against the far wall. The atmosphere is spare, but clean and comfortable. 83 S. Main St., New City. 845-499-2500.

Mount Ivy Cafe: This cozy cafe has been called one of the best seafood places in town. Sample the pasta ravioli with brandy cream sauce or one of the tunas: wasabi, teriyaki, or sesame. There are huge portions and a $13.95 early bird special from 3-6 p.m. 14 Thiells Mount Ivy Road, Pomona. 845-354-4746. 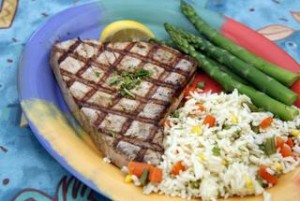 Gilligan’s Bar and Grill (left): The restaurant arm of C&M Seafood shop is more pseudo-Caribbean vacation than seafood shack. Expansive and exuberant, it’s decorated with sunny peach walls and decked with potted palms. The atmosphere is festive enough to engage kids, but not so hokey that it’s off-putting to adults. Everything is fresh and expertly cooked. As good as the food is, the best thing about Gilligan’s is the service, with its well-trained friendly, attentive, and energetic staff. Their enthusiasm is contagious, especially when they give a spirited rendition of the Gilligan’s birthday song. 366 Route 202, Pomona. 845-354-2139. 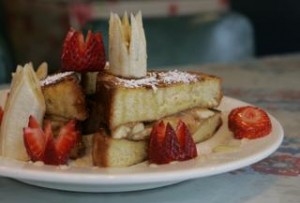 Nanuet Hotel: Charmingly cluttered with vintage signs, framed photos and memorabilia, but the waitstaff is as attentive as you’ll find at any high-end place. Most of the pies follow the “everything but the kitchen sink” rule, with options including the Garbage Pie (bacon, mushroom, onion, sausage, meatball, pepperoni and peppers), the Antipasto Pie (ham, salami, provolone, roasted red peppers and onions), and the Veggie Garden Pie. There are burgers and sandwiches, too, and the wings are great. 132 S. Main St., Nanuet. 845-623-9600.