It was the word “luncheonette” that struck deep into this Bronx girl’s heart, bringing on an unexpected flood of wonderful memories spent in the diners and corner candy stores in my childhood neighborhood of Norwood in the North Bronx.  My “sweet shop” in the 1970s was Adolf’s Luncheonette on 204th Street, where you could find moms lunching with their carriages of sleeping babies and uniformed school kids having egg creams or malteds at the counter.  Cupcake Kitchen is a brighter and cooler version of the luncheonette of my past and spending the day behind their kitchen door was outta sight (insert 2012 slang) stellar.

Restaurant:  The Cupcake Kitchen and Luncheonette

Description:  Just three years young, this 45 seat restaurant is a blast from the past with modern touches like serving up cappuccinos and lattes.  The main throwback for me was the lunch counter complete with swivel stools and domed cake stands.  There are also Formica tables with chrome chairs, trimmed in white and a surprising uncharacteristic bright blue (it’s literally called Bippety Bop Blue —  Pantone 277U to be exact).   Cupcake Kitchen is a neighborhood haunt where you can meet friends for breakfast, lunch or early dinner and then indulge in the guilty pleasure of one of their almost too cute to eat cupcakes. 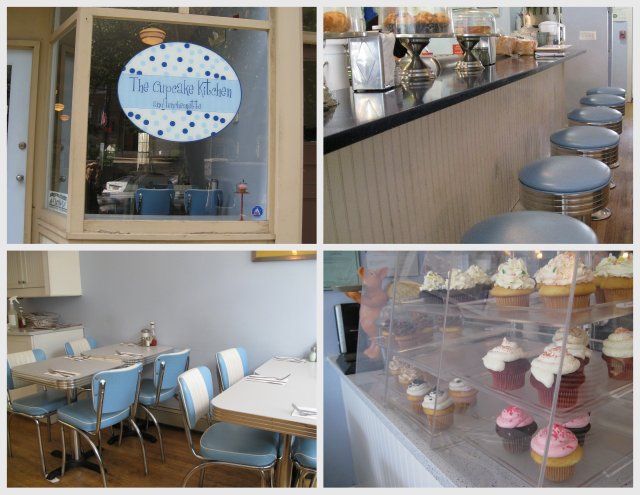 Cuisine:  Simply good comfort foods dominate the menu like stuffed French toast, waffles, grilled cheese, BLT, chicken salad, and, of course, hot dogs and hamburgers.  The menu caterers to all tastes like the PBJ & Bananas or Fluff for the kiddies or the Arugula Salad with Nuts, Cranberries and Gorgonzola for the more adult palate.  The star attractions are absolutely the irresistible and delectable array of cupcakes made fresh every day (it is called CUPCAKE Kitchen after all!).   Custom decorated cupcakes and cakes for all occasions are their specialty, but be warned though that they may look so good, you might not want to slice them up! 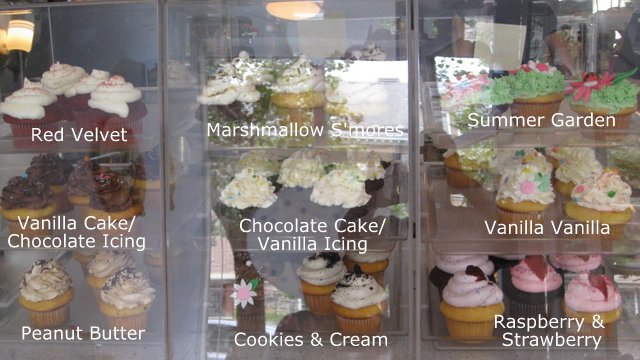 Owner: Jennifer O’Connell, a former sleepwear designer and mom of two young girls, wanted to create a “happy place” inspired by a friend’s luncheonette which was owned by three generations of her family.  Cupcake Kitchen was four years in the making, and clearly, Jen’s fun decorating style can be found in every inch, even down their signature font on the menu aptly named “Girls are Weird.” 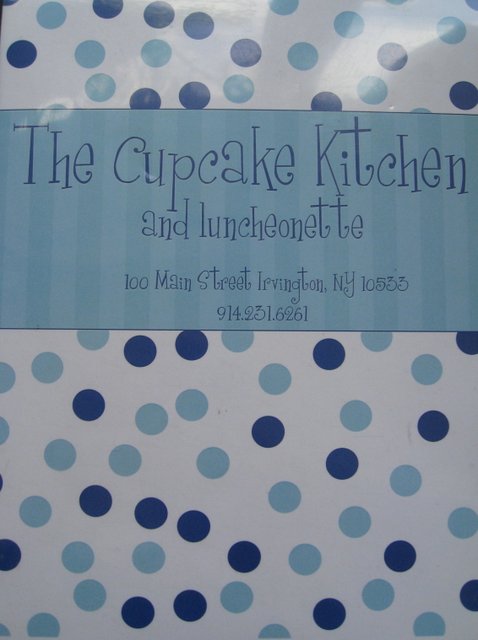 I’ve been told that if you enter “cupcake” into your GPS, it will lead you right to their door.  I haven’t tried it yet, but I suspect with all the smiles I saw on their patrons’ faces (and the staff behind the counter), you could search for “happy place” and get the same result. 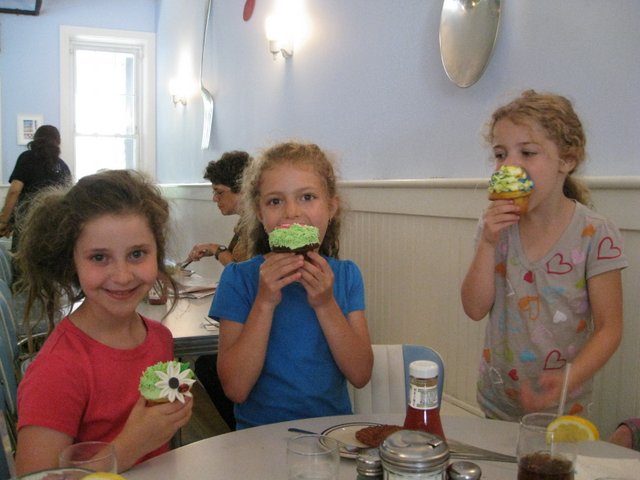 Brook, Emmy and Lila happily enjoying their after lunch cupcakes

Kitchen staff:  Eleanor heads up the kitchen, but it seems like everyone on the staff can jump in on any task. Craig and Dylan were serving up breakfast and lunch the day I was there.  Sunny was helping with serving, but I understand that she is the queen of icing and has mastered making the fluffiest and sweetest.   Donna Monaco Olsen, who is no stranger to the Small Bites blog sharing her many dining experiences during Hudson Valley Restaurant Week, is the resident cake and cupcake decorator extraordinaire and my sweet instructor for the day.  Donna is also the co-coordinator for Westchester Community College’s Taste of Westchester program which brings participants into some of Westchester’s best restaurants for chef demonstrations and hands-on classes (take a peek at the extensive list in the recent WCC Fall schedule under Taste of Westchester in the Continuing Education section).

Signature dish:  Ummmm, cupcakes, of course!  Specifically, the Vanilla Vanilla cupcake is the most popular by far.  Moist vanilla cake topped with creamy swirls of icing, with an excellent icing to cake ratio ensuring just enough of both in every bite.  Here’s a little secret  —  sometimes the vanilla vanilla cupcake is disguised as one of the specials like the Summer Garden. 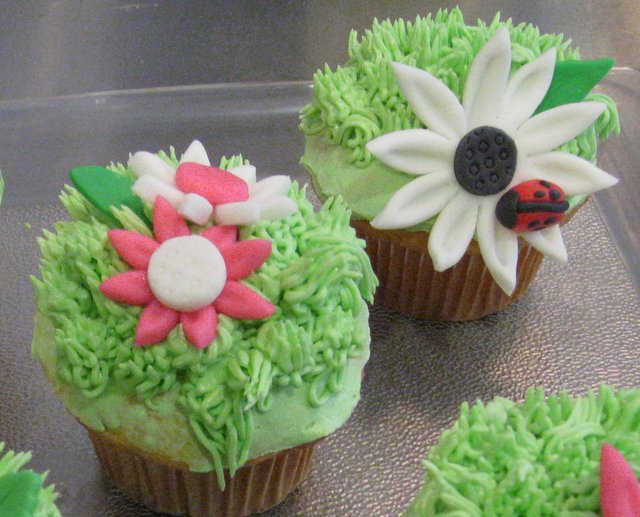 Bar scene:  That would be the ice cream bar scene with a luscious selection of artisanal Jane’s Homemade Ice Cream made right in the Hudson Valley.  In a cup or cone, a scoop of Killer Chocolate or Cookies ‘n Cream is the perfect summer treat. 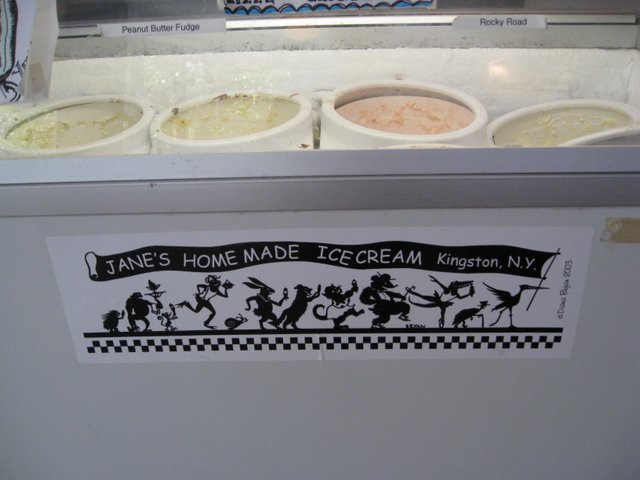 There are also floats, shakes, and my childhood favorite, the egg cream.  It’s neither egg nor cream, but a frothy combination of milk, seltzer, and chocolate (or vanilla) syrup.

Coolest appliance:  The Waring drink mixer is a milkshake multitasker able to take on three at a time with ease.  The look is pure retro with the oversized metal tumblers. 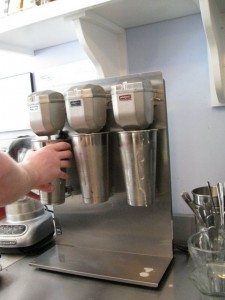 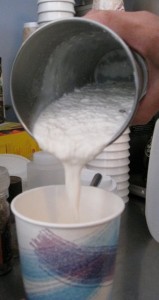 On the warmer and more modern side, there’s the sleek Rancilio espresso maker. 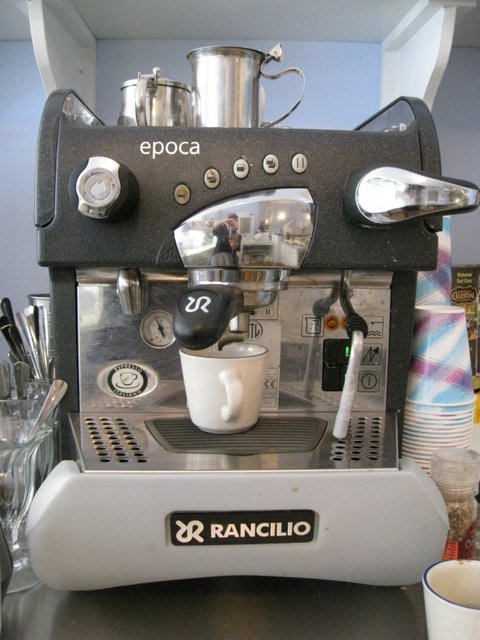 Size of kitchen:  The long and narrow kitchen (about 15 ft x 6 ft) is on full display at the counter, where you can watch your meal or cupcakes being made.

Size of prep area:  Prep for breakfast and lunch is all done at a compact 6 ft x 2 ft counter.  Cakes and cupcakes have a more spacious 4 ft x 3 ft space close by. 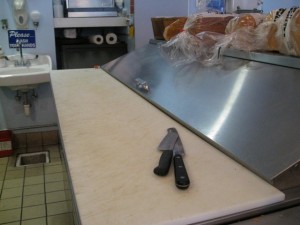 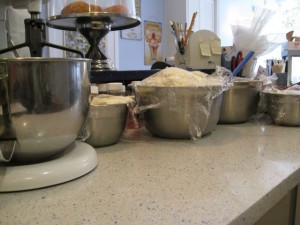 Turning up the heat:  The very efficient Southbend four burner/griddle/oven combo is the key appliance in this open kitchen. 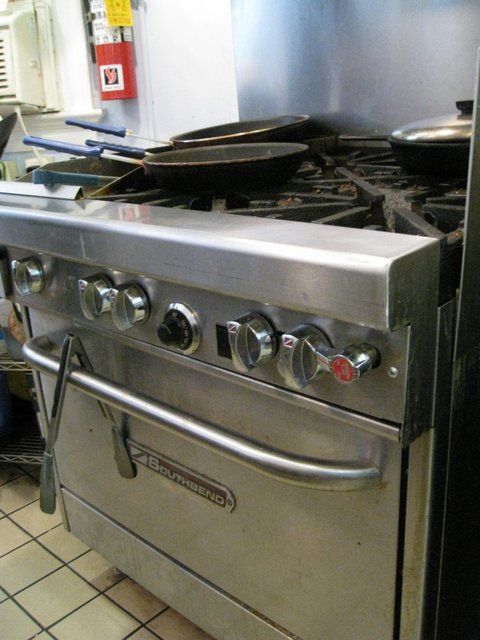 Staff’s personal choice:  It’s the Chocolate Peanut Butter cupcake that tops the staff’s list.  Rich chocolate cake with creamy peanut butter icing is a match made in cupcake heaven.   It has my vote because it reminds me of an inside out Drake’s Funny Bone (but way better!).

Favorite kitchen gadget:  Looking like colorful surgical instruments, the tools of the trade for a cake decorator offer the same precision to create sweet edible art. 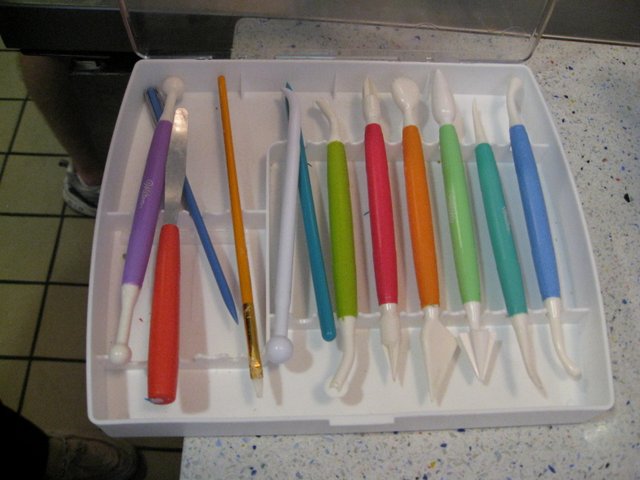 On any given day, you can watch Jennifer and Donna hard at work making one of their unique specialty cakes. 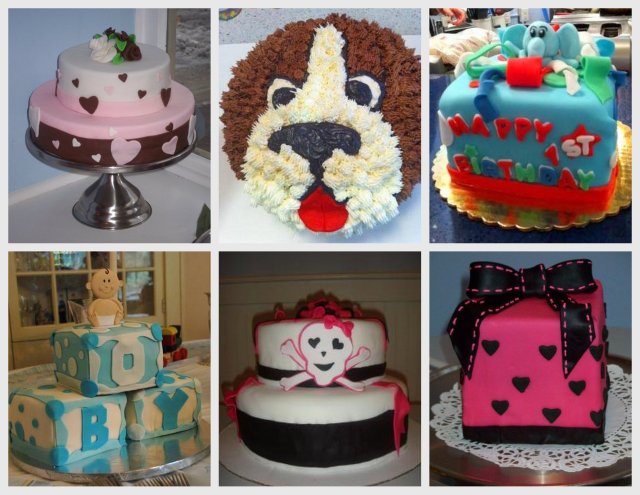 What’s cooking in the kitchen now:  The first task of the day was to make the icing.  All the icings start with a base recipe to which colorings and flavors, like marshmallow fluff or peanut butter, are added.  In the “nothing goes to waste” department, a green colored icing can be transformed into mint with a few drops of extract.  Donna and I beat together butter (Vermont’s Cabot brand), heavy cream, pure vanilla and powdered sugar into a soft fluffy cloud. 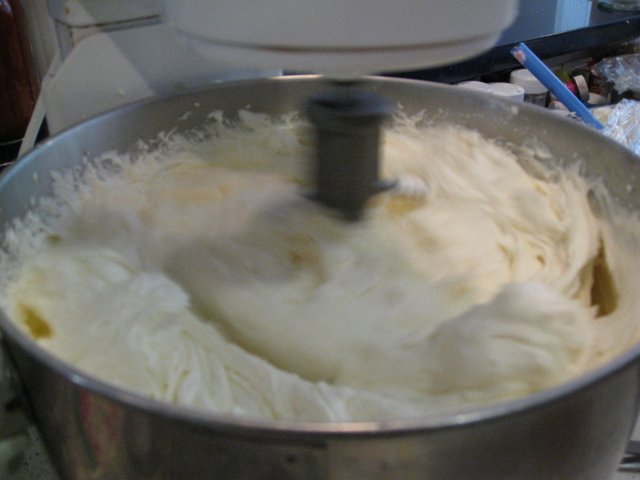 Now the fun really started as I learned to master the piping bag.  Yes, it all looks so easy to fill this cone-shaped bag (making sure there are no air pockets) and then placing a hand on top to squeeze while the hand holding the bag guides the icing around the cupcake.  This is definitely a case of easier said than done. Just when I thought I had everything working together, I’d apply too much pressure and my swirl would begin to look more like a meltdown. 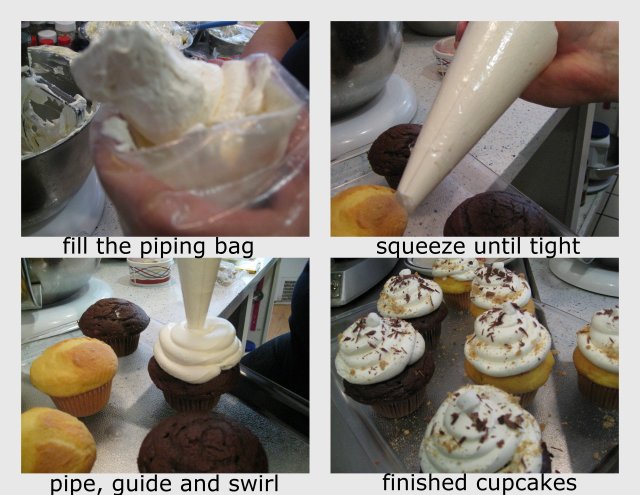 Donna and I then worked on the special Summer Garden cupcakes.  The tips on the piping bag are easily interchangeable, so we popped on a tip with multiple holes which created something like icing spaghetti.  Using short strokes on the top of the cupcake, we made a lush grass-filled lawn. 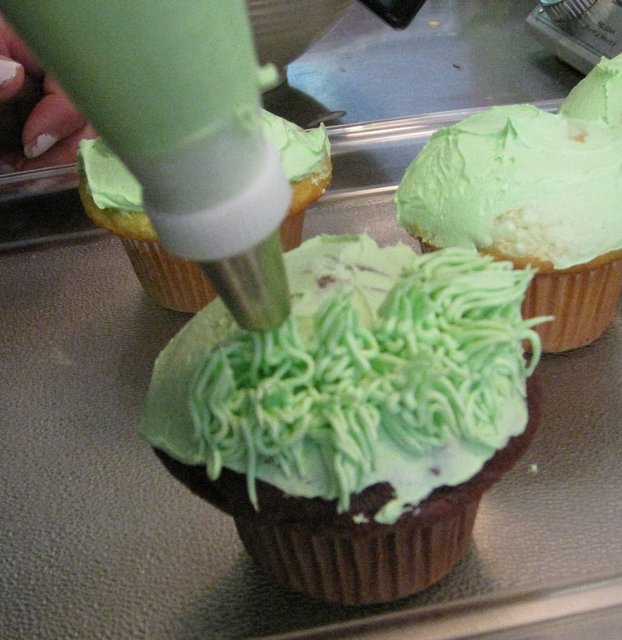 Then Donna brought out the fondant.   She describes this thick, pliable icing as adult playdoh.  Okay, with the practical experience of entertaining my own kids during the pre-school years with the Playdoh Fun Factory (I even made my own homemade dough), I thought I had this technique nailed.   She had rolling pins and various cut outs for circles, stars, flowers, etc.  Donna showed me how to use one of her many tools to make a tiny indent on a petal to give it more of a dimensional shape, and then we used an ordinary cheese grater to create texture on the flower’s center. 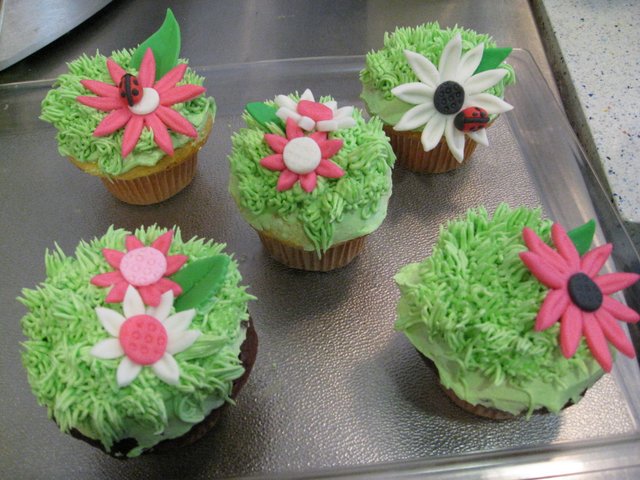 Music:  Keeping with the theme of the luncheonette, we grooved on the Good Times internet radio station playing music from the 50s and 60s.  Although I’m a child of the 70’s (rock and disco), I was right at home since I grew up with American Bandstand and the early Beatles and Stones from my older sister and brother.  One obscure oldie but goodie that was playing, Eve of Destruction by Barry McGuire, totally brought me back to my sister’s collection of old 45s (anyone remember those mini records, a precursor to the CD?).

My random insights:  My lunch was Grilled Cheese with Bacon and Tomato on sourdough.  It had just the right amount of oozy cheese and crunchy bacon with a pop of flavor from the tomato.  Delicious! 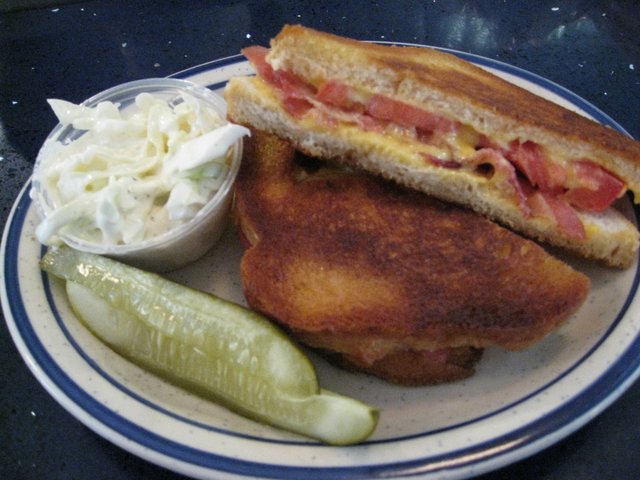 After spending the day at Cupcake Kitchen, I think I might have found the fountain of youth in Irvington.   When a restaurant can make you feel like a kid again through their food and atmosphere, it’s really something special.  I decided to take some treats home for dessert as a little experiment.  Hmmmmm, after just a few bites, I thought my husband was looking a little younger, but I might have to do some more research. 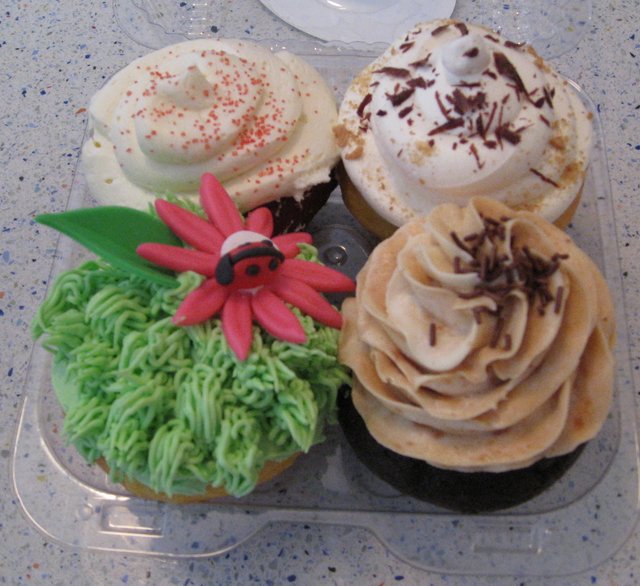 Details:  The Cupcake Kitchen and Luncheonette, 100 Main Street, Irvington. 914.231.6261.  Cupcake Kitchen is open daily 7 days a week at 8 am.  Closing time varies seasonally so it’s best to call ahead.  Custom decorated cakes and cupcakes for all occasions are their specialty.

Patrice Costa is a passionate foodie who is on a personal culinary mission to learn it all from local chefs.  She looks forward to sharing her experiences as she goes behind the kitchen door in some of her favorite restaurant kitchens.