People are reading
You are at:Home»Restaurants»Openings»Will Jeremiah Tower Open a New Restaurant and Food Hall at the New Rochelle Armory?

By mid-September, we should know which of two proposed restaurants will be going into the former Armory on Echo Bay in New Rochelle: one has rooftop dining and is part of a performing arts center; another is anchored with gigantic food market and aquaponic greenhouse and has celebrity chef Jeremiah Tower on its team. 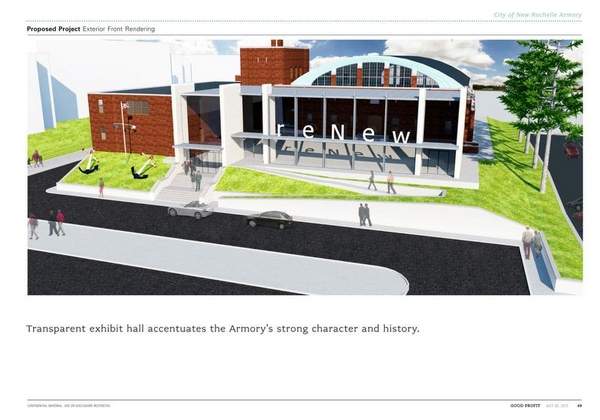 The two pitches were made to the City Council yesterday.

The rooftop dining would be part of a plan for a performing arts center presented by a group of veterans who saved the building from being razed. The main theater would be a 500-seat venue, plus several black-box theaters. It would be called Veterans Memorial Center.

The plan presented by a group called Good Profit would have celebrity chef Jeremiah Tower as its culinary leader. Tower, who made a name for Alice Waters’ Chez Panisse in Berkely, Calif., and later opened the famous Stars in San Francisco, is one of the pioneers of California cuisine. They are also proposing a setting similar to Chelsea Market, with stalls for food vendors, farmers and artisans. That is the one in the rendering above.

Reporter Ken Valenti has been on this story. Here’s a link to his first story on Aug. 8, which sketches out the plans. I have posted his second story after the jump. It gives more detail on the proposals.

NEW ROCHELLE — Will it be plays, concerts and opera, or a large food market with a restaurant by a celebrity chef and an “aquaponic greenhouse”?

The two groups vying to reinvent the former armory on Echo Bay have visions that overlap — both see restaurants and arts in the 36,575-square-foot building — but they go about it in starkly different ways.

A plan led by veterans and others who lobbied to save the building when it might have been razed several years ago is using the performing arts as the keystone to their plan, hoping to attract acts such as Off-Broadway shows and to provide a permanent home for the New Rochelle Opera.

“We believe that New Rochelle is starving for any kind of entertainment and cultural activity,” said Ronald Tocci, a former long-term state assemblyman who was later named deputy commissioner of veterans affairs for the state Department of Labor.

Tocci is a leader in the team hoping to create the Veterans Memorial Center for the Performing Arts in the building on East Main Street. He is a board member of the Save Our Armory Committee, which is proposing the plan with the United Veterans Memorial and Patriotic Association. It would cost from $6 million to $10 million.

The other group, Good Profit, envisions a massive food market with restaurants, showcasing farmers and food artisans from the region, similar to the Chelsea Market. It boasts celebrity chef Jeremiah Tower.

Michael Blakeney, founder of Good Profit, said the $26 million project would bring healthy, regionally grown foods to market and restaurant settings. Using carrots as a simple example, he said a patron could buy the vegetables raw and whole, chopped, or in a carrot soup to take home and heat up.

“Then you could also sit down at a restaurant and have carrot soup and maybe a side of oysters and a glass of rose and sit on (a) terrace on a summer day with a view of Echo Bay,” he said.

In the Veterans Memorial Center plan, the main theater would be a 500-seat venue, plus several black-box theaters, said Morris Cymbrowitz, an industrial designer and team member. It could also house touring groups, Off-Broadway shows and performing arts classes. It could also be reconfigured to become a theater of 1,000 seats or more for concerts, according to the group’s proposal.

The Good Profit plan would include a glass-and-steel addition on the front to showcase arts and offer a performance space with more than 100 seats.

The “aquaponic greenhouse” would be a system for growing both fish and leafy greens, with the two elements designed to sustain each other.