People are reading
You are at:Home»Restaurants»Openings»Butterfield 8 and Lola’s Mexican Kitchen Are Coming to White Plains, And You’ll Never Guess the Chef

If you’ve been wondering what’s going on behind the plywood at the corner of East Post Road and Mamaroneck Avenue in White Plains, I have a two-fold answer, and I think you’ll be thrilled with both parts.

Part 1: The new restaurants will be Butterfield 8, a gastropub, and Lola’s Mexican Kitchen, an upscale Mexican restaurant with a big bar and lounge. Owners John Gazzola and Ralph Battista, Jr., also own Butterfield 8 in Manhattan and Butterfield 8 and Lola’s in Stamford, Conn., as well as Mulberry Street Grill, which opened earlier this year in the former Eclisse space on East Post Road. (Gazzola also owns about 15 other restaurants with different concepts up and down the East Coast.)

Part 2: The chef will be Matt Safarowic, who has been working for David DiBari of The Cookery in Dobbs Ferry for the past 7 years. Yeah. I’m taking the over that food is going to be good. 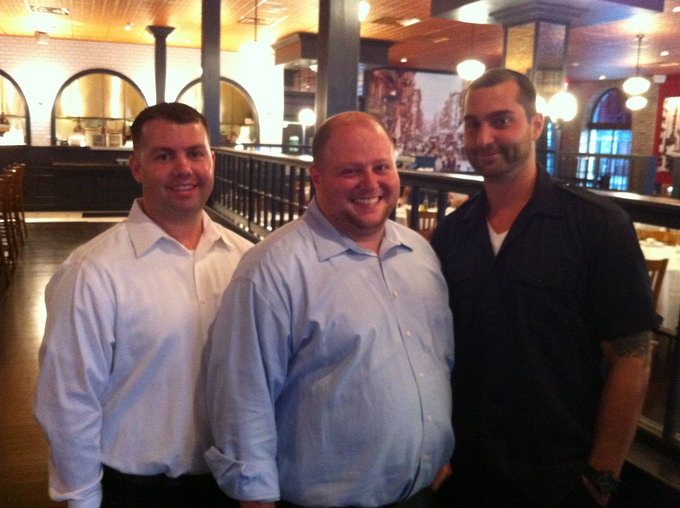 So here’s the lowdown on Butterfield 8 and Lola’s Mexican Kitchen. I’ll save the details on Mulberry Street Grill for another post (because I have photos to go along with that one).

Butterfield 8 is going to open in a couple of weeks. I got a sneak peak, and I can tell you, you are going to be floored with how gorgeous it is: an open kitchen, walnut paneling on the walls, unglazed tile in grey and black laid in a herringbone pattern on the floors, a black-grey marble bar, Edison bulbs in the light fixtures and, the piece de resistance: doors that will open the entire restaurant completely to the street, so you can people-watch on one of the busiest corners in Westchester.

There will be 92 seats in the dining room, 20 seats outside and 30 at the bar. The menu takes all that’s great about pub food, but takes it seriously. Instead of nachos, for example, Safarowic has created “Dirty Chips,” which come with smoked bacon, blue cheese fondue, crispy chicken livers, tomato and green onion. His pork sandwich is made with pork belly, and it’s served with barbecue sauce, pickled onions and iceberg lettuce.

The menu is divided into starters, pizzas, sandwiches, mussels (four kinds) and plates (which are entrees). There’s also a “Daily Supper,” with specials assigned to each day of the week. (Thursday is “Homesick Texans, and is an ode to barbecue lovers.) No need for me to describe any further, you can see for yourself by downloading the PDF:  Menu at Butterfield 8

“Yes, it’s a pub setting, but with quality restaurant food,” says Gazzola. “And the reason we do an open kitchen is because we want you to see we’re taking it seriously. We’re not hiding down in the basement or something.”

Lola’s Mexican Kitchen will open in late October. It’s still a construction site, so I can’t describe the materials to you, but I did see the outline of a horseshoe shaped bar, and the walls dividing the bar and lounge area from a rectangular-shaped dining room. Lola’s will also have doors that open completely to the street.

The menu in Stamford is described as “Refined Casual Mexican Cuisine,” and has everything from tacos and salads to a burger and lobster enchiladas. Safarowic will be changing the menu for the White Plains location, so look for new additions after Bu8 gets off the ground. Here’s the Stamford website: Lola’s Mexican Kitchen.

I’ll keep you updated as openings get closer. And isn’t it cool to see some new cooking talent in the county — with an impressive mentor behind him?  Safarowic worked with DiBari at Zuppa, then left to work at PepsiCo for a little while, then returned to DiBari’s kitchen at The Cookery. I know Matt is excited, and wants to make DiBari proud (which can only mean good things for us as diners!). Here’s what he emailed me about his new job: