People are reading
You are at:Home»Restaurants»The Best Sandwiches in Westchester and Rockland

Sandwich lovers know what goes between the bread — or the bagel, wrap or pita — is a very personal matter. Some people love theirs bursting with meat, cheese and toppings, while others need just a schmear of cream cheese and some ultra-thin shaved lox to find perfection. And just as there are endless permutations on the formula, so, too, are the list of favorites. 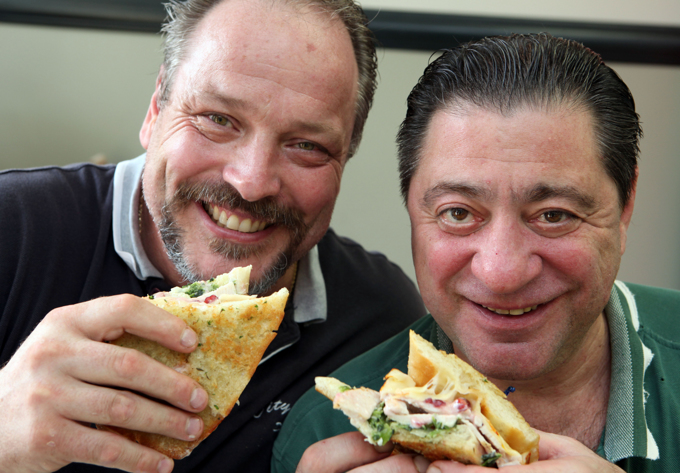 From left, owner Vinnie King and Frankie Gambelli are photographed with the Gobbler sandwich at City Line Deli. Tania Savayan/TJN

And, as kids going away to college this week know, a favorite can also border on an obsession. Just ask Greg Santone, who owns Rocky’s Deli in Millwood. Parents come in, he says, and they say, “I just picked up my kid from the airport. I haven’t seen him in six months — and the first thing he says is not ‘Hi Mom, or Hi Dad,’ it’s ‘Can we go to Rocky’s Deli?’”

So here’s the last chance before Thanksgiving break to pick up that chicken cutlet, that bagel and lox or that bacon-egg-and-cheese. We gathered a few of our favorites to recommend, but don’t consider this a definitive “Best” list. In fact, we want to know your favorites, too. Nominate them in the comments section below. 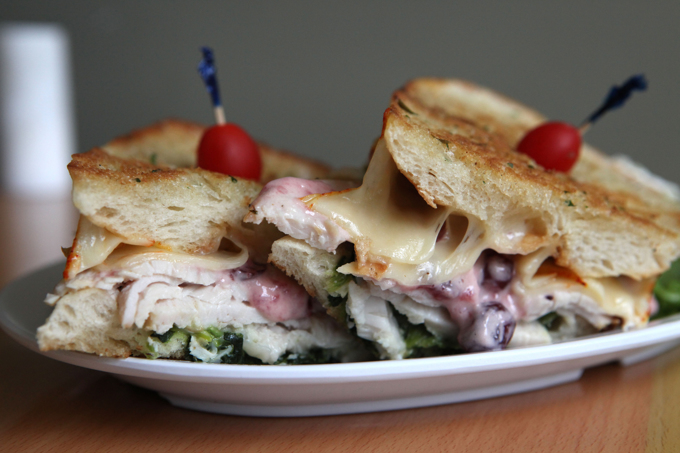 Check  out the sandwiches, after the jump.

Vinnie King and Frankie Gambelli usually take this perennial all-star off the menu in the heat of summer, but since fall is near, you’ll find it back at this North White Plains mainstay. “My daughter calls it ‘Thanksgiving in one bite,’” says King, and no wonder — here are the construction details:

“It’s fresh turkey, off the bone, served on a grilled ciabatta bread that is seasoned with stuffing butter, so the bread actually tastes like stuffing on the outside.” Inside, King adds Muenster cheese, creamed spinach and cranberry mayo. “We make our own creamed spinach, the mayo is homemade, actually everything we do here is homemade,” says King. “It’s just a great sandwich,” adds Gambelli, who has been working with King for 20 years and has a nice culinary pedigree of his own: He and his father, the late Frank Gambelli, owned a number of very popular restaurants in and around White Plains. Details: 573 North Broadway, White Plains, 914-949-0125, search Facebook for its page.

The first thing kids do after coming home from college is to make a “Rocky’s Run,” and that’s easy to do, since the deli is open 24 hours, seven days a week. By far, the favorite filling for a sandwich is chicken cutlet, and for a long time, the most popular toppings were American cheese, bacon, lettuce and tomato, spread with mayonnaise mixed with hot sauce. It was known as the Mickey D. But after a customer heard about the Clucken Russian, invented at Cameron’s 24/7 in Cross River, he started ordering it at Rocky’s, too. This led to owner Greg Santone receiving a letter from Cameron’s asking him not to use the name. So he asked his staff to come up with a new name. In a tip of the hat to counterintelligence (get it?), it was deemed The Soviet Spy. Santone, his wife, Cheri, and their longtime manager, Tom Dickinson, have sold thousands and thousands of chicken cutlet sandwiches since the Santones bought the place in 1979, so he’s seen fads come and go. Lately the kids are on a kick to mix-and-match breakfast and lunch, with a chicken cutlet wedge with egg, bacon, cheese and hash browns. “They come at all hours of the day and night for that,” says Santone. “I ask them, ‘Are you going to take a nap after that?’” Details: 235 Saw Mill River Road, Millwood. 914-941-2165, rockysdeli.net. 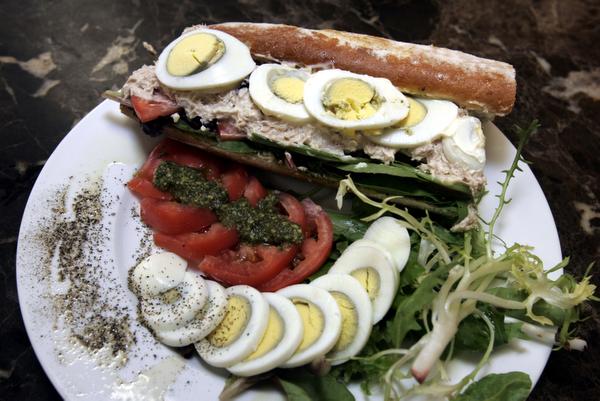 Normally, a pan bagnat sandwich is like a Nicoise salad on bread. At least it is in Nice, France, from which they both hail. Salad and sandwich share the same ingredients: tuna or anchovies, lettuce, hard-boiled eggs, olives. But at Patisserie Didier Dumas, the sandwich gets a twist for American tastes. Instead of anchovies, chef-owner Didier Dumas spreads a crunchy baguette with basil pesto. Instead of seared or tinned tuna, he makes a tuna salad. Then he layers tomato and mesclun leaves and tops the whole thing with slices of hard-boiled egg. Seasoned with a bit of salt, pepper and — instead of olives, olive oil. Is it traditional? No. Is it absolutely addictive? Without question. Details: 163 Main St., Nyack. 845-353-2031, www.didierdumas.com

Bacon, egg and cheese on an everything bagel

The line for bagels here on a Saturday morning can stretch out the door and onto the sidewalk. But time flies when you’re chatting with your neighbor, whom you’re bound to run into, because, as most everyone in Rockland agrees, these are among the best bagels around. No wonder, then, that a simple breakfast sandwich — two fried eggs, bacon, American cheese, ketchup and S&P — is elevated to the ethereal when it’s served on a chewy-on-the-outsideinside, airy-on-the-inside handmade bagel rolled in sea salt, poppy seeds, sesame seeds, garlic and onion flakes and caraway seeds. Frank Salemme, who has owned the shop for 17 years, gets up before 3 a.m. every day to hand-roll and boil the dough, then he bakes the bagels (more than 700 of them on the weekends) in a 500 degree oven for about 10 to 15 minutes. No wonder there’s always a fresh, hot bagel waiting for you when you get to the counter. With two runny eggs paired with salty, smoky bacon and gooey cheese, you’re in bagel heaven. Cool thing about Nyack Hot Bagels, too: it gets college kids coming from both directions. Students who grew up in Rockland can’t wait to get their sandwiches upon return from school, but there’s a whole other contingency of customers from Nyack College who can’t wait to get back to school to have their favorite breakfast sandwich. Details: 321 Route 59, Central Nyack. 845-358-0837, www.nyackhotbag els.com

Many people in Valhalla swear by Pat’s Deli on Columbus Avenue, tucked away in a mostly residential neighborhood up the hill from downtown. You can get newspapers, Lottery tickets, but most of all you can order this popular staple. It’s a breaded and fried chicken cutlet, with bacon, barbecueBBQ sauce, sauteed onions and melted cheddar cheese on a soft Kaiser roll. Details: Pat’s Deli, 121 Columbus Ave., Valhalla, 914-949-7287. 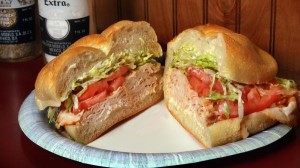 Nothing revolutionary here, just plain old-fashioned goodness. The Swan version is straight-forward: sliced chicken, freshly sliced tomato, lettuce and mayonnaise on a poppy seed Kaiser roll. Still, local resident Ken Mahoney says his sons won’t have it any other way. “I told them we should have bought stock in the Swan Deli for the hundreds of chicken sandwiches we bought there over the years,” he says. Details: 519 Route 22, Purdys, 914-277-8182. 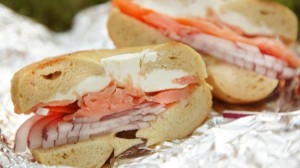 Lox and cream cheese on a bagel

It’s not just the early crowd that fills Mamaroneck’s Avenue Bagel Cafe for one of its best sellers: lox, cream cheese and red onion on a bagel. “It is popular all day long,” says owner Abe Abdalla, who gets his lox and bagels from Brooklyn, but he’s keeping the location a secret. “The only thing people do different, is sometimes they will add lettuce and tomato.” Details: 227 Mamaroneck Ave., 914-777-1904.