Well summer’s over now. So long vacations and stifling heat. Hello crisp weather and all things pumpkin. The WBC ushered out summer with a breakfast-filled August, paying visits to a range of restaurants: The Fountain Diner in Hartsdale, Rue Des Crepes in Harrison, the newly reopened City Limits in White Plains, and Chat American Grill in Scarsdale.

August 4: We begin the month with a simple, quick breakfast at the Fountain Diner on Central Avenue in Hartsdale. The larger size of our group this morning posed some logistical problems for the diner and our server was perhaps a tad overwhelmed. 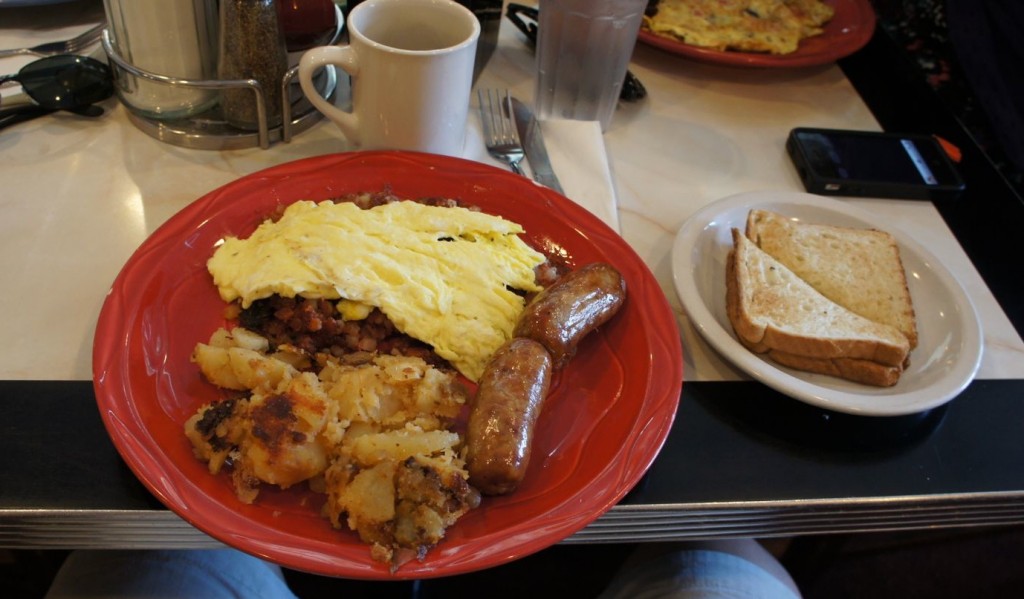 But we soon settled in for some basic diner fare: plenty of omelettes, sausage, and egg sandwiches were enjoyed. Everything was your basic diner-quality food at reasonable diner prices. Nothing with a wow factor, but you don’t usually go into a diner expecting to be wowed anyway. The several televisions in the diner were bonuses, since we got to enjoy some Olympic action with our eggs over easy. The 411 on Fountain Diner.

August 11: This was our second visit to Rue Des Crepes, but only the first time we actually ate there. Confused? Our full post explains this situation. You’re probably just wondering how the crepes were. We enjoyed our crepes, savory (ham and cheese; quiche crepe) and sweet (French toast crepe, lemon/butter/sugar crepe, banana/nutella crepe). 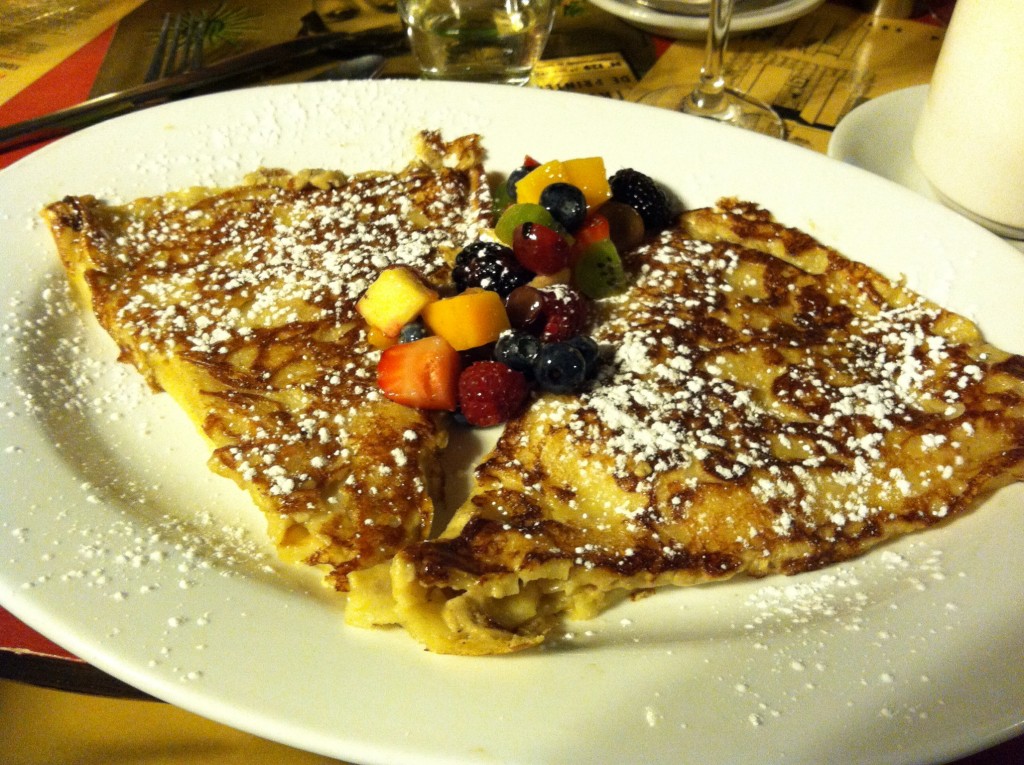 However, what we didn’t enjoy were the plate sharing charges, for both sharing a crepe from the prix fixe brunch menu (at an already pricey $17.50), but also for sharing a couple of dessert crepes. The other thing that disappointed us was that the savory crepes featured on the prix fixe brunch menu were not available a la carte. However, if you pop to the front of the restaurant and get some crepes to go, you can get any crepe you want. Rue Des Crepes is a cute establishment, but we think it’s a better bargain to get your crepes to enjoy at home. The 411 on Rue des Crepes.

August 19: City Limits has been under construction for quite some time and its been almost 3 years since we last had breakfast there, so when the restaurant reopened we decided it was time for another City Limits breakfast. Despite the new look, City Limits has the same delicious brunch menu. 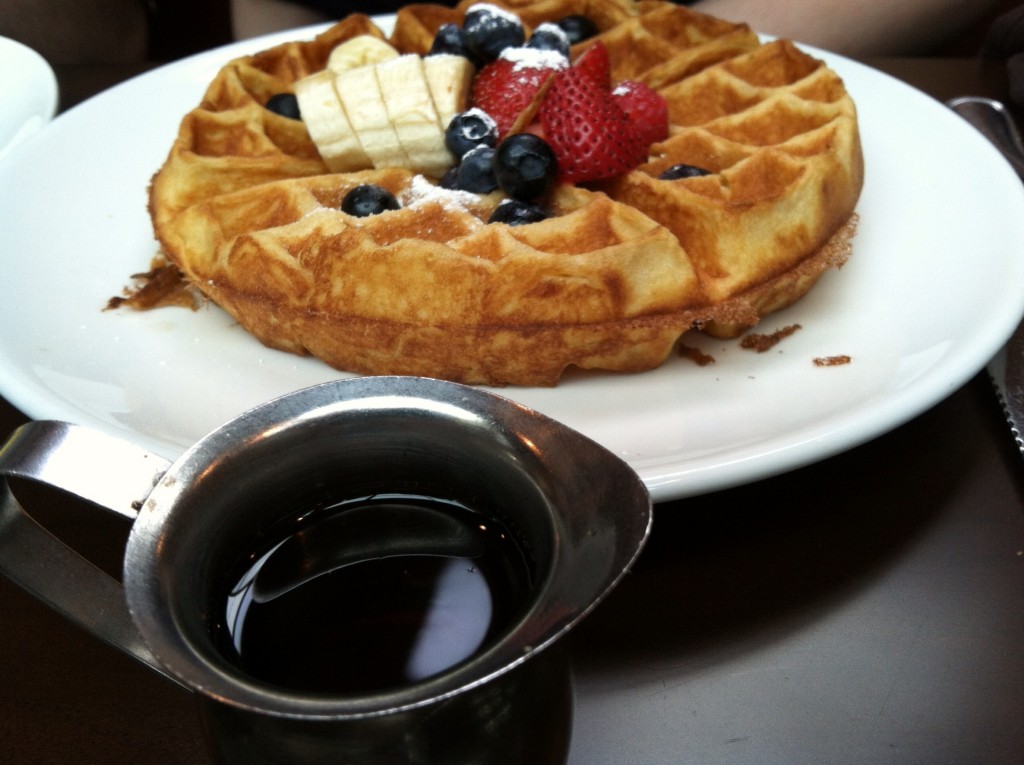 Sylvia ranks the City Egg Sandwich as one of the best sandwiches in the county, and Shelley gives high points to the wonderful citrus balance in the orange lemon waffles. There was also plenty of crispy, flavorful bacon for everyone. And since City Limits is known for its bakery, the WBC had to try dessert. We were on a lemon kick, and weren’t disappointed. The lemon pound cake is a tried and true favorite, and the lemon layer cake was moist, creamy, and cheerfully yellow. City Limits remains a great Westchester family favorite. The 411 on City Limits.

August 25: We cap off the month and bid farewell to summer with brunch at Chat American Grill.  We tried to focus on the food, but got really distracted when “Final Countdown” played during our meal. The omelettes and eggs benedicts enjoyed by some around the table were well-cooked, flavorful, and nicely plated. 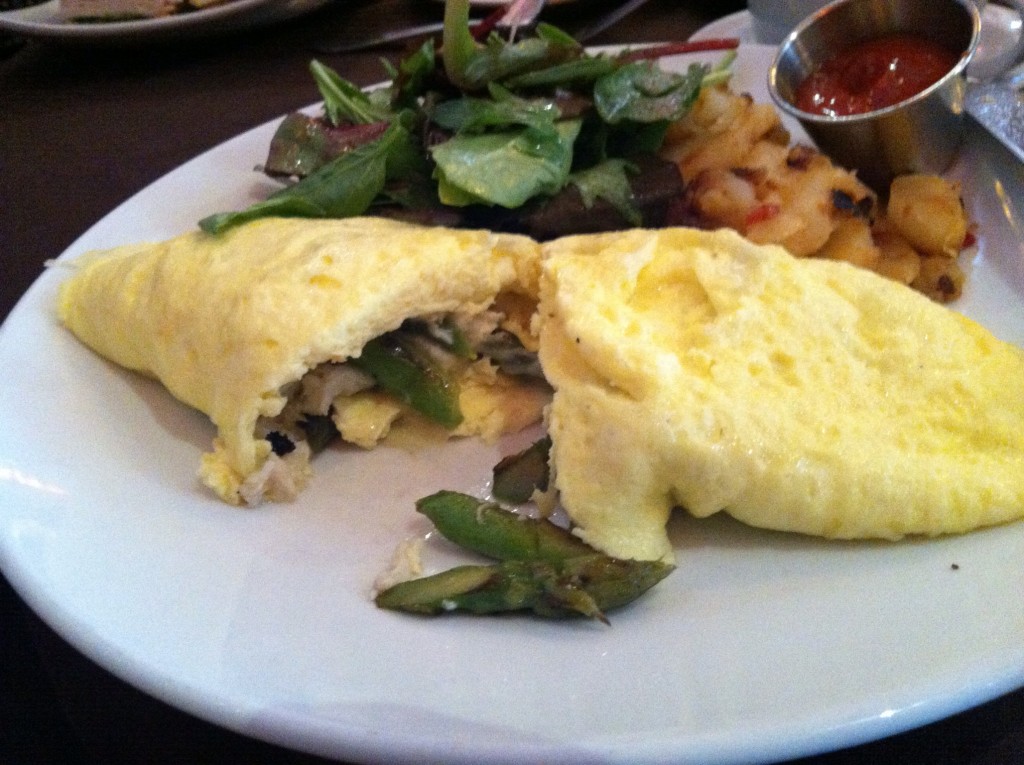 However, the overall consensus was that the breakfast dishes were a bit overpriced. The lunch items on the brunch menu, however, were more reasonably priced and equally delicious. Shelley gave a thumbs up to the turkey/brie Panini. Although it was a little too warm for us to dine outside, the large patio at Chat looks like a wonderful place to enjoy a meal on a more moderate day. (Like the crisp evenings we’ll get in fall!) The 411 on Chat American Grill.