People are reading
You are at:Home»Food Links We Love»Notes From the Captain Lawrence Tasting Room, Vol. 28 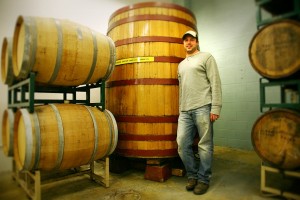 Scott Vaccaro, owner of Captain Lawrence Brewing, has been logging major frequent-flier miles to improve the brewery’s beer, and make sure it gets into a wider group of hands. This past Sunday, he flew out to Washington State to spend quality time with the farmers in Yakima who grow the hops that give Captain Lawrence beers their distinctive flavor. Scott used to get his hops through brokers, but now goes directly to the source.

“After the hops crisis of 2008, we decided it’s in our best interest to deal directly with the people who farm the hops,” Scott says. “We’re going to shake hands, rub some hops together and have fun.”

Scott also hopped a plane to Buffalo last week for what he calls an “exploratory venture,” meeting with beer distributors in upstate/western New York, and moving toward getting Captain Lawrence’s brews, such as the flagship Freshchester Pale Ale, the Captain’s Kolsch and the Liquid Gold, into our northern neighbors’ stores, pubs, restaurants and homes. Scott met with four distributors, and hopes to start distribution up that way next year.

“It’s our first meet and greet with them,” Scott says. “The first steps have been taken.”

With all due respect to our farming friends in Yakima, technically not all the hops for Captain Lawrence’s beers comes from the region; Scott has also been using hops grown in his parents’ back yard, on Captain Lawrence Drive in South Salem, New York, for a few of the brewery’s small-batch experimental brews. Next up in the pilot system is the Knickerhopper–a Harvest Ale brewed in the kettle with fresh hops and dry-hopped with the homegrown stuff. That should be ready for its tasting room debut in a week or so.

Also heading for the tasting room—another pilot system beer made from roasted chipotles. Do you dare?

And it being the season of apple picking, Captain Lawrence has brewed a fresh batch of its seasonal favorite Golden Delicious. Between this trippel ale, dry-hopped and aged in apple brandy barrels, and the Captain Lawrence Pumpkin Ale, there’s a veritable cornucopia of fall flavors pouring out of the tasting room taps.

While the hops junket represented Scott Vaccaro’s first trip to Yakima, here’s another first for Captain Lawrence: an India Pale Ale. While Captain Lawrence has of course brewed a Pale Ale and an Imperial Pale Ale, there’s never been an India Pale Ale—the name comes from when British brewers would hop the heck out of their beers to help them survive the long trek to the former colonies in India–hatched out of the brewery since it opened in Pleasantville in 2006. (The difference between the three members of the pale ale family is best explained over a beer—preferably something from that family.)

The brewery has invested in some serious hardware: a pair of 160-barrel fermenting tanks from Portland, Oregon, and a thousand new kegs from Germany, to get the ball rolling on the inaugural Captain Lawrence India Pale Ale.

“In almost seven years, we’ve never made an India Pale Ale,” says Scott. “We’re playing around with that now.”