People are reading
You are at:Home»Columns»Port Chester restaurants near The Capitol Theatre, Vol 3: Sichuan Pavilion

Port Chester, all of 2.5 square miles, manages to serve up a hemisphere’s worth of national cuisines. The Western one, mainly. For our series about ethnic restaurants near The Capitol Theatre, we’ve toured the Americas sampling Mexican, Salvadoran, Peruvian, Uruguayan and Argentinian food – and we still haven’t traveled more than one block from the theater. 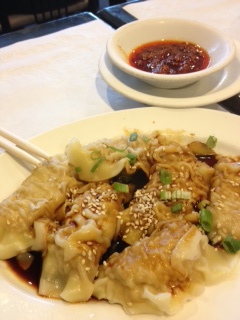 This time we’re taking the research a little farther afield to Sichuan Pavilion. It’s a small, family-owned, quality-minded restaurant three-quarters of a mile up Westchester Avenue, where you can find a quiet gathering spot before the show. My advice would be to allow plenty of time – only because the flavors are too good to rush through.

Ricky Chan, the restaurant’s young VP, adds creative touches to the cuisine while preserving the Chinese integrity, as he terms it. His Crispy Pork Belly Bao, for example: It’s a steamed, lotus-fragranced bun with pork that’s braised four hours, flash-fried and combined with pickled turnips and jalapeno sauce. “I call it Chinese sliders,” Chan says.

The pan-seared pork dumplings win raves, but Sichuan steamed dumplings, $8 a plateful, are another great starter: meaty and flavorful, with chicken, pork and water chestnuts bound up in a tender wonton shrink-wrap. They are shipped in a brown sauce, chili sauce on the side.

My friend Joanne and I settled in during a damp, blustery day and craved something 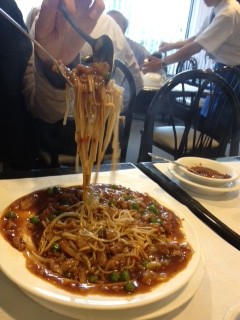 to warm us up. Joanne drives here from Mamaroneck when she needs a fix of pan-fried noodles. As the daughter of Chinese parents, she remembers her mother making wheat noodles by hand, stretching and dividing pieces of dough into thin strands. And as a foodie from Mamaroneck, she likens the process to Italian pasta making. She deemed our steaming bowl full of Ja Jiang Mein – not unlike a Chinese spaghetti bolognese, if you can make that leap – as suitably “al dente.”

Ja Jiang Mein, $10.50, was warmly spiced in a thick, “hoisin infused” chili sauce incorporating minced pork, green peas and onions.  We hit it with some vinegar, which brightened the
flavor.

“Northern Chinese like their noodles,” Joanne said, before schooling me on how to slurp.

After the Northern jaunt we turned to the more seafood-oriented Cantonese cuisine. Seafood Casserole, a $27.50 chef’s specialty, arrived still bubbling away in a covered clay pot. The “casserole” refers to the clay pot, and does not imply baking. The stew, in a brown oyster sauce, turned up shrimp, scallops and tubes of tender calamari. Such dishes are derived from Cantonese, but with flavors that are “a little bit more amped up,” Chan says. We lingered over seafood and rice while members of the staff sat down to rice porridge during an afternoon lull. The unassuming decor – vertical blinds, pale aqua walls, white tablecloths and a little vase of synthetic roses gracing each table – creates a quiet backdrop for the amped-up dishes.

Like other Chinese restaurants in Westchester, Sichuan Pavilion borrows its name from a Chinese province but doesn’t keep itself there. Chan, whose family is from Hong Kong, groups the dishes according to customer taste: specialties of the house, for those going all out; an assortment of stir-fries that are tweaked here and there, and the “simply classic” category for those who refuse to move beyond their Moo Shu Pork – no matter how much Chan tries to lure them elsewhere.

He’s eager to show you what he’s done with ginger syrup, and he wants to put his General Chan’s Chicken up against any General Tso in Westchester. He also knows that some visitors “have to have the chicken and broccoli,” he said. “I can’t take that away from them.”

Sichuan Pavilion: A quality-minded Chinese restaurant near the Port Chester-Rye Brook line. Once you’re in on this secret, you might wish you’d known earlier.
Details: 480 Westchester Ave., Port Chester, (914) 939-8889. Open noon to 10 p.m. Tuesday through Thursday; noon to 10:30 Friday and Saturday, and 1 to 9:30 Sunday.
Go if you’re looking for: a step up from your average Chinese restaurant, with a cuisine that adds original touches.
Signature dish: Shanghai Surf & Turf, $24, is one of Ricky Chan’s riffs on Chinese tradition: filet mignon and sea scallops with broccoli, carrots and sugar snap peas in a black pepper sauce. Chan also makes his own ginger syrup and incorporates it into another invention, Honey Aioli Shrimp, for $9.
Bet you didn’t know: The large Chinese characters to the side of the front door translate as “tasteful garden.” As good a description as any.

Leah Rae is a staff writer, blogger and photographer for The Journal News and LoHud.com, focusing on Port Chester and Rye. She has written about the growth of Westchester's immigrant population since joining the paper in 1994, and has reported from Ecuador and Guatemala on the hometowns of local immigrant communities.