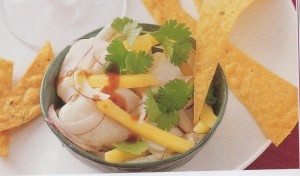 Ceviche—fish “cooked” by the acid lime, lemon, and or orange juice—is a delectable treat that has relatively recently hit the menus and plates of many here in the States. Still, folks are confused by this dish. In an attempt to introduce this delightful treat to new fans, I’m going to share some info about its background, as well as a few varieties (ah—there are so many!). Okay, I realize that not all of you are fish fans, but if you are, mis queridos amigos (my dear friends), this is something you must sample! Ceviche can be found throughout the Americas, in various incarnations. I was introduced to it in Peru, where the privilege of enjoying a traditional Limeñan ceviche after a late night (of many Pisco Sours!) during fiestas, and on other lovely occasions. Since then, I’ve been a huge fan!

This particular dish is a kind of cousin of ceviche: the tiradito. (Actually, you could say it’s also a cousin to sashimi—and that’s another story!) Though I had my first tiradito in Peru, this one hails from Ixtapa, on Mexico’s west coast, though I sampled it in Monterrey. Clean, simple, and elegant, this dish goes well with a Pisco Sour, or a nice Sancerre (had one last night and can’t stop thinking about it!) and more. Make sure, of course, that your scallops are sushi grade!

And for other fun and festive recipes from my kitchen, hope you’ll check out my blog, In the kitchen with Arlen

Serves 6 as an appetizer (2 scallops per person)

Chill six small plates in the refrigerator for about an hour before serving. Place two sliced scallops on each plate. Decorate with red onion and slices of mango. Add a pinch of salt to each plate. Drizzle with olive oil, lime juice, and a couple of drops of hot sauce. Sprinkle with cilantro. Decorate with two tortilla chips per plate. Serve immediately.