People are reading
You are at:Home»Food Links We Love»A Meal That Merritts the Miles

We don’t venture beyond state lines much, unless there’s some sort of beach involved. But when an old friend opens up his first restaurant, even those $4.25 gallons of gas shouldn’t prevent you from checking out what they’ve come up with.

And our old pal, Nick Martschenko, seems like he’s onto a good one with South End, across from the New Canaan (CT) rail station, in the space that formerly featured Pine Social.

After doing his time at the CIA in Hyde Park, Nick was sous chef at Gramercy Tavern and then executive chef at i Trulli in Manhattan before relocating up to the wilds of North Stamford, and taking an exec chef title to the Winged Foot club. 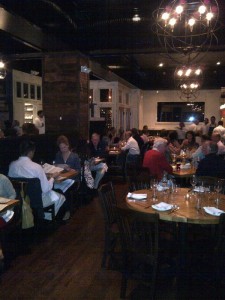 I knew him from those Manhattan days. There were a handful of New Year’s Eves when my wife and I did not feel like venturing very far out and dealing with the scourge of imbibing amateurs, and Nick and his wife Erin frequently had us over to their walking-distance place in Gramercy for cocktails, champagne and and some super-tasty apps Nick would effortlessly whip up in their little kitchen.

Now he’s got his own joint, not to mention a much bigger kitchen, with Keith Siskind as GM and partner (Siskind comes from Tarry Lodge). And it’s a good one.

I have fond, if fuzzy, memories of Nick, back in the old Gramercy Tavern days, coming out with a giant tray of exotic cheeses from all over the globe about halfway through our tasting menu experience, and South End’s got a wide assortment of them as well. We tried some tasty Old Chatham Camembert, along with the zesty Manchego; plates of both were priced at $4.

An array of artisanal meats, including Jamon de Serrano and Wild Boar Sausage, sell for $5 a pop.

Among the apps, a Warm Tomato Tart special stood out, as did  Nonna’s Meatballs. A Grilled Fresh Bacon starter, with mustard spaetzle, fruit mostarda and sherry sauce, is a good one to hoard should this reported bacon shortage play out.

My missus got the Diver Scallops, with cream-less “creamed” spinach, roasted cauliflower and black truffle vinaigrette, at $32,  and I had the Grilled Flat Iron Steak–a steak frites with au poivre butter, house ketchup and hand cut fries, in part because my four year old is a french fry connoisseur. That was $29.

The place was packed by around 6:30 last Saturday. Our meal, with some pals from the Nutmeg State, was long and leisurely, which meant we didn’t have time for dessert, outside of the kids wolfing down ice cream.

We’ll have to make that a priority next time–especially the Ricotta Donuts, with lemon cured dipper chocolate sauce and a single shot of espresso, and the Warm Chocolate Cake with mint ice cream (both $10).

South End is upscale, but not outright fancy–we saw no one in sweatpants, which pleases me to no end–and lively but not loud. Entrees run around $30, and we enjoyed some uncommon beers as well–such as a Palm Belgian Ale and a Brown Ale from Charter Oak Brewing Co., based right in New Canaan.

The trip from Mount Pleasant took 30 minutes on the Merritt, and it was worth heading into a foreign state for.