People are reading
You are at:Home»Food Links We Love»Notes From the Captain Lawrence Tasting Room, Vol. 30

Some signs of fall are obvious: the leaves bursting with color along the Taconic, friends who stop by with extra apples after a fruitful excursion to the orchard, Rex Ryan’s teary press conferences after a horrific Jets loss.
Other autumnal tells are more subtle: The way one’s taste in beer shifts to heartier, more flavorful brews.
Indeed, the lineup at Captain Lawrence these days features more full-bodied entries than a busload of sumo wrestlers. Out of sight, like your favorite cargo shorts, are seasonal players such as the Chico Loco wit bier and Summer Sipper cream ale, and in their place are the Pumpkin Ale, the hotshot spiced brown ale known as Ball Bustin’ Brown, and the newest rookie, Katchkie Harvest Ale, brewed with roasted squash and pumpkin, with the likes of cardamom and cinnamon in the mix. (If you haven’t seen the video on how Katchkie Farms and Captain Lawrence came together to hatch the Harvest Ale, it’s worth checking out at http://vimeo.com/50115798).
What exactly compels us to put away the wheat beers and light lagers, like your missus’s white Capri pants, after Labor Day? 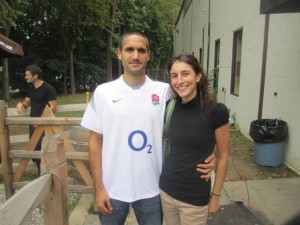 Seasonal flavors, for starters. “I came specifically for the Pumpkin Ale,” says Paul Lisi, who schlepped around 45 minutes from upstate Carmel.
“He always wants Pumpkin Ale,” notes Deanna Abadia, also of Carmel.
Paul says summer is for quaffing Corona or a Sam Adams summer brew, while fall ushers in the pumpkin ale.
“It’s a mental thing,” says Deanna, who opts for the Ball Bustin’ Brown, which tasting room manager Aaron Pozit brewed especially for his wedding on Saturday. “You look forward to the seasons changing, and enjoying what the new season brings.”
Chris Reeve—cue up the Superman jokes, if that’s your thing—is enjoying samples with bud Dave Roberts. The two were roommates at George Washington U., and now are neighbors in Astoria. Chris says the summer brews—he likes wheat biers and pale ales in the sultry season—go down fast and easy. His choice for fall, such as pumpkin ale and Imperial IPA—are made to be ingested at a leisurely pace.
They’re leisurely working their way down the Limited Release menu, and Chris is partial to the Pumpkin. “Pumpkin Ale can be hit or miss,” he says. “I really like this one.”
Dave enjoys a little Ball Bustin’. The two had planned to visit the brewery for months, and finally found a day that worked for both. “We came from the parking lot, headed around the corner, and Whoa!” says Chris of their reaction upon arriving. “Right away, it looked like a good decision.” 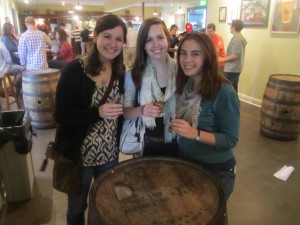 With Aaron out of town for matrimonial matters, a jazzy score fills the tasting room. Alyssa DePasquale and Claire Racine are roommates in White Plains. They met on Craigs List, and it’s actually working out. A reporter at the Port Chester paper Westmore News, Claire saw a press release about Captain Lawrence moving to Elmsford, and decided to check it out. (Mind you, that happened in January, but she’s been busy.)
Pal Emily Berrue has joined them from central New Jersey. Emily, like Paul Lisi and Chris Reeve, is a pumpkin ale aficionado. She says the Captain Lawrence version isn’t quite pumpkin-y enough for her tastes, though her friends say she’s a harsh critic of all things pumpkin ale. The three are warming up before seeing Lenny Kravitz at White Plains High School, of all places. (Are they gonna go Lenny’s way? Very definitely.)
Claire is digging the Harvest Ale, which offers a malty base and spicy finish. “I like beers like this when fall comes around,” she says. “I try to get in as many as I can during the season.”
Tarrytown’s Village Dog provides the nosh on the patio. The sky is gray, but dry. Erica Chahade and Paolo Mori (top photo), Brazilians based in White Plains, are sipping full-bodied brews while watching friends play bocce. “In the cooler weather, you look for something stronger,” says Erica. “Something to keep you warm.”
But Paolo, who delivers kegs for Manhattan Distributors and therefore knows his brew, says a good beer, such as the Captain’s Reserve Imperial IPA by his side, should be enjoyed regardless of what the calendar or thermometer shows. “If you know how to really taste a beer,” Paolo says as his friend pelts him with bocce balls, “it tastes good year round.”