People are reading
You are at:Home»Columns»Seasonal Chef: Turnips

Every now and then I need to write a post “on the fly.” Today is just that day. I was planning on doing a story about flatbreads, but Liz (my fearless Editor) decided to save her flatbread story for a few weeks so I decided the same. Whenever I can, I like to sync up with her on these blog posts!

As luck would have it, this past weekend I just happened to pick up a few turnips from the Cabbage Hill Farm table at the John Jay Farm Market. I was up to see my vegan-buddy and former Throwdown competitor JL Fields doing a cooking demo. After picking up my CSA box from the Gaia’s Breath Farm table – and doing a little friendly heckling of JL, I was headed home with my bag of goodies! 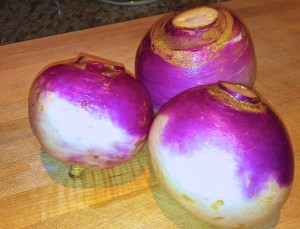 On Sunday afternoons I usually get an email from my Mother asking me what I picked up at the market over the weekend. When I said turnips she was very excited, saying that she loved eating and cooking with them. She also said my Grandmother would remark occasionally how much she hated them because her mother and grandmother cooked them all the time. No surprise to me as my  Grandmother came from a very large Irish family in Pittsburgh. Turnips, while probably inexpensive back then too, were almost surely associated with the Irish Potato Famine for her as well. During that part of their history many survived on just turnips and cabbage.

Turnips can be grown easily, even in the least favorable soil, resist frost and last over the winter. They can be made into stews, roasted or pureed. The good news is that turnips are chock full of vitamins and minerals. While they were not prized food during famines and hard times, they did provide many nutrients for people. Both the root and tops are completely edible. The tops, or greens, have even more nutrients than the bottoms. Vitamins A, B, C, K and Folic Acid top the list. Turnips date back to the 7th century BC in written form, although there doesn’t seem to be any archeological evidence. They officially make an appearance in the first century AD. Noted even back then as being able to “prevent famine in humans.”

I only picked up the roots this week so I’ll save the tops for another post. I also didn’t have much time for experimentation so after a little internet and cookbook surfing I got a few ideas for my pretty little turnips to share with you.

More after the jump ….

First a soup. As you all know, I love love love soups. They are just about the easiest thing to make and fantastic for a quick lunch, pick-me-up or light dinner. I came a cross this soup recipe featuring turnips and leeks, but changed it up a little bit. (My recipe is below.) 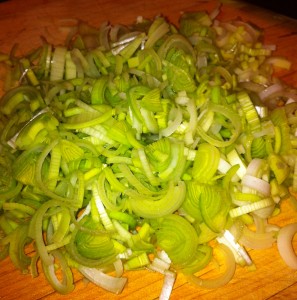 Slice the white and pale green parts of your leeks and rinse well under cool water to remove and dirt that might be lurking. 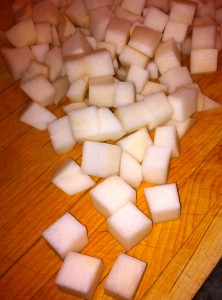 Peel and cube your turnips. 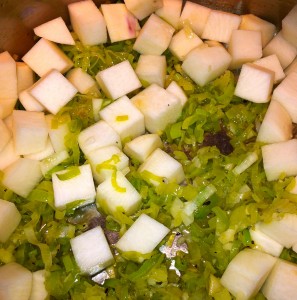 Saute the leeks with garlic until soft and add the turnip cubes. 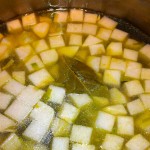 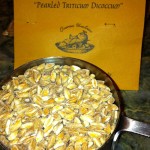 Add your stock and farro and simmer until the farro is al dente. 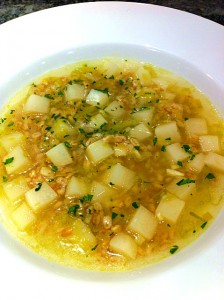 Stir in the parsley and serve!

My second idea, slightly adapted, comes by way of Martha Stewart and could not be easier. 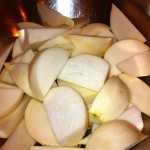 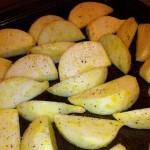 I peeled and cut the turnips into wedges of 8. Tossed with olive oil, seasoning and parmesan cheese. (How could I go wrong?) 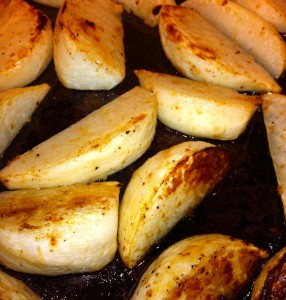 Roast for about 25 minutes and you’re done!

While turnips my still have the stigma of being a poor mans food, how can you pass up it’s sheer yumminess? If you can, try to pick up a few at the farmers market this weekend. While you can find them all through the winter, give them a taste literally out of the ground!

Heat the oil over medium-low heat in a soup pot and add the leeks and garlic. Season with 1/2 teaspoon each of salt and pepper. Cook until they soften, about 3-5 minutes. Add the turnips and cook for about 5 more minutes stirring occasionally. Add the stock another pinch or two of salt and pepper and the bay leaf. Bring just to a simmer and add the farro. Continue to simmer (on a low boil) until the farro is al dente, about 15 minutes. Taste and adjust the seasoning. Stir in the parsley and serve.

Preheat oven to 475 degrees. Coat a baking sheet with vegetable spray. In a large mixing bowl add the turnips, olive oil, 1/2 teaspoon of salt and pepper, nutmeg and parmesan. Using your hands toss well to coat. Arrange turnips in a single layer and roast until deep golden brown on both sides, 25 to 30 minutes. Flipping halfway through to get some color on the other side. Taste and add a little more cheese and seasoning if desired. Serve warm. 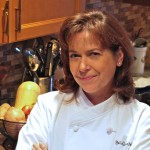