People are reading
You are at:Home»Drinks»Mixed Case: Meet Our New Experts — Derek and Carol Todd of Wine Geeks in Armonk

At Wine Geeks in Armonk, you have to have faith.

Derek and Carol Todd carry wines from small producers — bottles that come from families who own their own vineyards, grow their own grapes and shepherd those grapes from the ground to the bottle. 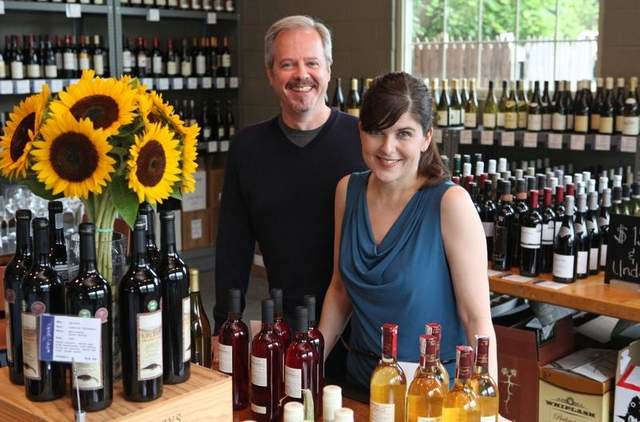 “So it’s really a passion for people,” says Carol Todd. “And it’s something that we share. We wanted to reflect that in what we have in the store.”

“One of the drawbacks to small-production wines is that there’s not a lot of it, so it does tend to run out faster,” says Derek Todd.

That’s where the faith comes in. If the same bottle you bought last time isn’t there on the shelf, they’ll choose another for you.

“We’re sort of becoming their personal sommeliers,” says Carol. “We’re tasting a lot of wine to find the best value for them. Once they’ve trusted us a few times, they come to see that we’re not going to carry anything in the store that we don’t believe in.”

We think that makes wine geeks Carol and Derek Todd the perfect choice to be our wine experts-in-residence for the next three months. For the next 12 Wednesdays in Life&Style, they’ll choose our LoHud Wine of the Week, and include tasting notes and suggestions for pairings. (Their first recommendation, Nicodemi Montepulciano d’Abruzzo Cerasuolo Rosé 2011, a rosé from Italy, is at the bottom of the page.) At the end of the 12 weeks, we’ll review our Mixed Case, and recap the choices assembled by the Todds. Then we’ll introduce a new expert.

We’ll also turn to them for suggestions for pairing wines with meals, such as for a Thanksgiving and the holidays. And when we do, it’s likely they’ll go for one of those handcrafted wines. Most of the wine in the shop, an industrial-chic-looking building just a short drive outside of town, comes from a line of 10,000 cases or less.

The couple opened Wine Geeks in 2009 after converting an old garage into a retail space. There are bay doors, a cement floor, wooden and metal shelves and a big, beautiful communal table in the back, where they host wine tastings and classes.

“We always wanted to do a retro-industrial feel, so when we found an old gas station, it was perfect,” says Derek. “And the idea of reclaiming a space was really important to us, as well,” says Carol.

Besides small producers, the Todds also focus on organic, biodynamic and sustainable wines.

“We think that if you can drink a great wine and avoid pesticides and unnatural additives then, why not?” says Carol.

Derek and Carol honed their appreciation for wine while working at restaurants in Manhattan. They were trying to make a go of being actors, and the restaurant jobs paid the bills.

“But the more and more I worked with wine and worked with a lot of great wine programs and some terrific restaurants, I developed a real passion for wine,” says Derek. “And to be honest, at a certain point I found myself on a night off being much more interested in finding a great restaurant and enjoying a really interesting bottle of wine than going to see theater.”

Carol has worked at Union Square Cafe, the Harrison and Blue Hill, all in Manhattan. Derek worked at the Red Cat, Cafe Luxembourg and Sant Ambroeus, among other restaurants. He eventually became the wine director at Blue Hill at Stone Barns in Pocantico Hills.

“That’s our strength from spending so much time in the restaurant business,” says Carol. “We know how to ask those questions and figure out what styles of wine a person is going to gravitate toward, based on what they’ve had in the past and enjoyed.”

“So there’s a certain amount of trust that we’re asking from people that (your wine) may not be there when you come back next time, but we’ll give you something that we think you’ll like just as much,” says Derek.

“If not more!” laughs Carol.