People are reading
You are at:Home»Food Links We Love»Notes From the Captain Lawrence Tasting Room, Vol. 31

It is Friday, the temperature hovers around 80, and everyone on the Captain Lawrence patio is simultaneously celebrating the end of the work week, and one of those rare, glorious days when the weather defies the calendar. Looking around the jammed tasting room yard—people partaking in bocce, grub from a pair of first-rate food trucks, and, of course, craft beer brewed fresh a few dozen yards away—and it looks like a perfect June day. (Yes, we know we wrote about the joys of drinking hearty beer in the crisp fall weather a week ago. Mother Nature is fickle, and so are we.) 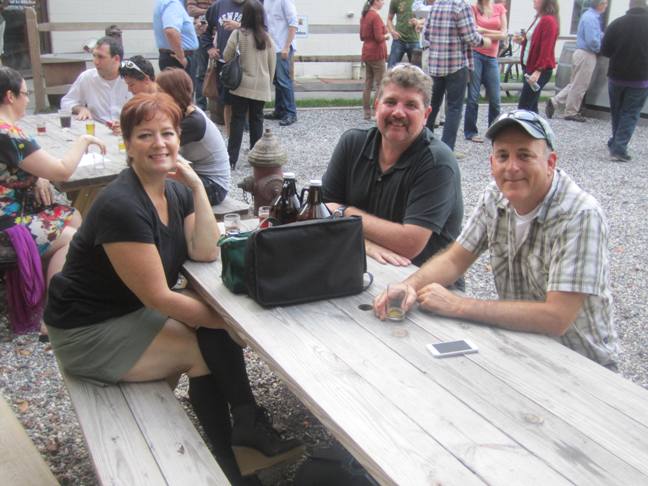 Sheena Moran and Danny McCarron have made the trip up from Riverdale in the Bronx. They’re enjoying what’s left of the popular brew Ball Bustin’ Brown Ale, and getting to know their new pal Danny Strauss. Danny, of Ossining, was supposed to meet a friend at the brewery. The friend bailed. But he’s sharing a table, and a discussion about the best places to see music in New Orleans, with Moran-McCarron.

Danny Strauss sips his Pumpkin Ale happily. “I can make friends anyplace,” he says with a smile.

The topic of live music continues. Danny McCarron mentions seeing My Pet Dragon at Captain Lawrence, part of the All Things Next monthly concert series, running into a friend from the Bronx he’d not seen in decades, and happily tipping a few glasses while talking about the days of yore.

“You are gorgeous,” Sheena tells him, the Ball Bustin’ Brown clearly busting any hint of inhibition.

“Stop it, you’re embarrassing me,” Evan says, a blush creeping up beneath his bushy beard. 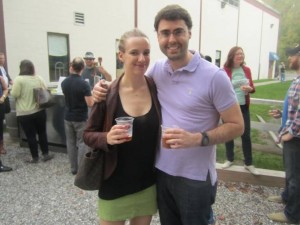 That’s what Frances Clow and Morgan Wallace, a couple based in Valhalla, are doing as well. What a difference a year makes; last October, they filled their growlers at the old Captain Lawrence site in Pleasantville as 10 inches of snow fell. When they got home, the power went out. “We plowed through the growlers after that,” says Morgan.

Frances is unwinding after an interview for UCLA’s medical school. Morgan is decompressing after a dual schedule of NYU business school and work at a video game company. She enjoys the Pumpkin Ale—it was the first Captain Lawrence beer she’d ever had, a few years back, notes Morgan—while Morgan is working through the Ball Bustin’, the Knickerhopper, the new Katchkie Harvest Ale. They’re digging the pizzas for sale as well, from the Cookery restaurant’s “Dough Nation” truck. “This is amazing,” says Morgan, scanning the setting around him. “We haven’t played bocce yet, but we love the outdoor space. There’s always something extra going on.”

Inside the tasting room, Nirvana’s “Come As You Are” bounces off the walls, and tattooed bartender Rob hits the tip bell like he’s working the speed bag. But it’s a day to fill up the sample glass quickly, and get the heck back outside.

Steve Crocco invented the growler bag on sale in the tasting room, qualifying him for the Real Men of Genius short list. He’s sipping a Ball Bustin’ Brown while, fittingly, busting the balls of the man who created the beer–newly wedded tasting room manager Aaron Pozit. “Captain Lawrence is the best customer I have,” he says. “I come here, sell them stuff, and drink beer at the same time. Who does that?” 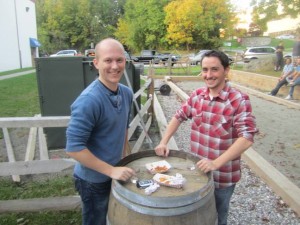 Work is a million miles away for Paul Marino, a medical student from Scarsdale, and Rich Cassidy, a structural engineer from Cortlandt Manor. They’re enjoying the Pumpkin Ale and the Captain’s Reserve Imperial IPA, and hot dogs from Village Dog of Tarrytown. “Spicy,” says Rich as he quenches the fire with a sip of beer.

“We come here almost every Friday to hang out, relax, unwind from the work week,” says Paul.

As long as Mother Nature is willing to serve up summer, Paul, Rich and everyone else on the patio are all too happy to bask in it. Paul mentions the earliest days of the patio last spring, when it was slowly transforming from a big pile of dirt to the most unique beer sampling site in Westchester. “I said, we should hang out here every day this summer,” says Paul. “And we kind of did.”