The Small Bites bloggers gathered for a pot luck, and we thought everyone should benefit! Here are the recipes from Spices and Seasons blogger Rinku Bhattacharya. 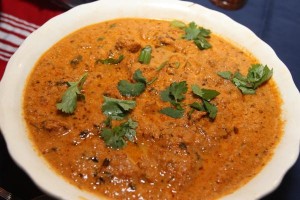 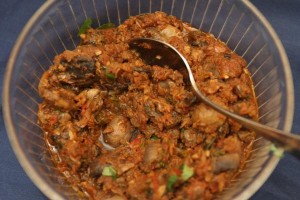 Last week, I stumbled and worked though this exceedingly simple recipe to cobble together something for dinner. The results were surprisingly good. Most of my cooking does get put together quickly and works effectively for everyday dinner, but has a robust richness of flavor from fresh summer tomatoes that taste like it took several slow simmered hours to produce. Quick and constant high cooking here produces a soft, spicy and very flavorful sauce that complements the mushrooms beautifully. Served over white rice with some lentils, this makes a wonderfully simple and comforting meal.

1. Quarter the onion, place in a food processor with the garlic, ginger and green chilies.

3. Heat the oil on medium heat for 1 minute.

4. Add in the cumin seeds and wait until they begin to sizzle, this will take a few seconds.

5. Add in the onion mixture and began cooking on high heat, stirring frequently for about 5 minutes. At this point, the onion should turn dry and begin to turn translucent.

6. Add in the tomatoes and cook on high heat for 5 to 6 minutes, until the mixture begins to thicken.

7. Add in the cumin coriander powder and cook for another one or two minutes.

8. Add in the mushrooms, salt and the sugar and continue cooking the mixture, stirring frequently until the mixture forms a thick fairly dry sauce that coats the mushrooms. This should take another five minutes.

9. Stir in the cilantro and serve.

Tikka Masala or butter sauce makes for a heated debate! Several food writers have made a big deal about the difference between Tikka Masala and Butter Chicken. Here, I shall be radical and tell you that Tikka Masala was an attempt to make the traditional butter chicken, sound different in England, in fact, also infamously called England’s national dish, there is not a huge difference between the two sauces when done right, however the fenugreek is absolutely essential in the butter sauce as is the butter, while the Tikka Masala sauce tends to be more reliant on the cream

This is a two in one recipe, since to make a Chicken Tikka Masala, you do have to make the Chicken Tikka, which is a stand alone recipe and then it is put together in this rich tasting sauce that is the coats the chicken.

2. Cut the chicken thighs into smaller pieces and marinate in the prepared mixture for 3 to 4 hours.

4. Thread on the chicken pieces skewers, brush with oil or cooking spray and cook 25 minutes.

6. This chicken can be eaten as is, if you do not want to make a sauce or do a double batch for use on a rainy day, this recipe is a great candidate.

For the tikka masala sauce

1. Heat the oil on medium heat for about a minute and add in the cumin seeds and let them sizzle for about 30 seconds.

2. Add in the onions and cook on medium low heat for about 5 minutes until the onions begin to soften and turn a pale toffee color.

3. Add in the ginger and garlic and cook for another minute.

4. Add in the tomatoes and cook for 6 to 7 minutes until the tomatoes soften and begin to release their juices.

5. Add in the chili powder, paprika, cumin-coriander powder and continue cook for 5 more minutes. The tomatoes should be quite broken down and the oil should seep through the sides of the spices.

6. Add in the cardamom, cloves and cinnamon and mix well and cook for a couple of minutes.

7. Turn off the heat and cool slightly.

8. Place the tomato spice base in the blender with the sour cream and process until smooth.

9. Add the mixture back to the cooking pan and mix in the fenugreek and the sour cream simmer for 4 minutes.

10. Add in the cooked chicken tikka and simmer for 8 to 10 minutes.