After nearly eleven years vegetarian, the last two and a half vegan (meaning I eat no animal products), I still get a little wistful about recipes I grew up with and no longer eat.  I almost wrote “can no longer eat” but that is simply not true. I could eat them but I choose not to eat animals. I am not missing out on a thing because a vegan diet is abundant and filled with fabulous, delicious foods.  But deeply entrenched in food are memories, culture and tradition.

Recently I asked my mother to send me a few family recipes – specifically her chili, potato salad and seven layer salad – with the goal to “veganize” them.  I started with the salad because it’s so darn easy! 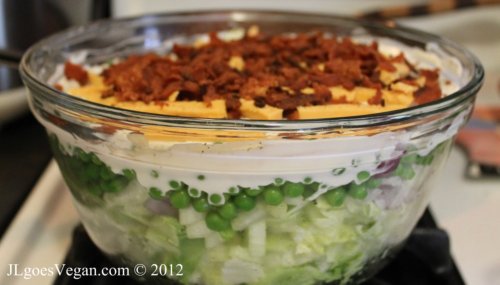 I Eat Plants columnist JL Fields is a certified vegan lifestyle coach and educator. She shares plant-based education, recipes and cooking techniques, as well as animal rights information and resources, on the popular blog JL goes Vegan. Her original recipes have been featured on Foodbuzz, BlogHer and Meatless Monday. She is the editor of the community blog Stop Chasing Skinny. JL is the founder and lead consultant for JL Fields Consulting and serves on the board of directors of Our Hen House. Follow her on Twitter, Facebook, Pinterest, and Google+.