People are reading
You are at:Home»Restaurants»Openings»Christopher Lee, a Michelin-starred Chef, to Helm Dan Rooney’s Cafe in Yonkers, Set to Open in January

Westchester is getting another Michelin-starred chef, and his restaurant will be designed by the same firm responsible for The Breslin and The Dutch in Manhattan. 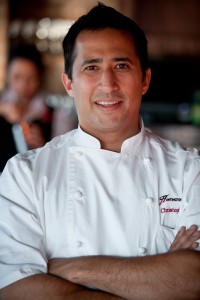 Christopher Lee, who earned Michelin stars as the executive chef at both Aureole and Gilt in Manhattan, will be the executive chef at Dan Rooney’s Cafe & Bar, a restaurant slated to open at the Empire City Casino in Yonkers in January, 2013. The restaurant, designed by Roman and Williams Buildings and Interiors, will have dual flame rotisseries, two fireplaces, and intimate seating areas called “snugs.” On the second level, there will be two vintage style bowling lanes, inspired by turn of the century bowling alleys. The restaurant gets its design inspiration from a Dan Rooney’s Cafe & Bar from the early 1900s in Pittsburgh, built by the family of Tim Rooney, the current owner of Empire City Casino.

According to Empire City, the restaurant will serve “traditional pub food in a high-energy atmosphere catering to sports enthusiasts, with flat screen televisions throughout the pub for live sporting events and simulcast horseracing. Dueling pianos will provide nightly entertainment.”

Lee was named “Rising Star Chef of the Year” by the James Beard Foundation and was selected as one of Food & Wine magazine’s Best New Chefs in 2006. He was also in Bravo’s inaugural season of Top Chef Masters. He attended the California Culinary Academy in San Fransciso and , in Manhattan, has worked at Jean-George and Daniel and was chef de cuisine at Oceana. He was also chef de cuisine and executive chef at Striped Bass in Philadelphia. He currently owns Huntington Social, a gastropub on Long Island.

Lee and Dan Rooney’s chef de cuisine, Julia Doyne, won the Burger Battle at the first annual Greenwich Food & Wine Festival Burger Battle last weekend. According to a press release from the casino, his “aged beef burger with brie, tangy onions, watercress, tomato, and honey black pepper aioli on a brioche bun” was so flavorful the judges were convinced the meat was ground with foie gras.

“Dan Rooney’s is about elevating pub food to the next level,” Lee said in the press release about the burger battle. “I don’t buy into the idea that a bar menu has to rely heavily on fried food and low-brow snacks. Here we take traditional pub classics and incorporate seasonal ingredients and layer flavors to keep things fresh and new. I use a lot of the same techniques used in fine-dining kitchens, but keep the dishes comforting and approachable.”

Another restaurant, Pinch, is also slated to open in January. According to a press relaese:

Pinch will feature an open kitchen, raw bar and pastry counter in a vintage diner-style environment, but the beer program will undoubtedly serve as a main attraction. Pinch will feature “table side beer taps” and a “tap wall” adorned with 100 tap heads showcasing 100 craft beers on tap, all from regional and local breweries based exclusively in New York State. Beer will flow from a large elevated keg room situated on a catwalk located above the open kitchen through architecturally designed beer lines, which will run along the ceiling serving as the centerpiece of the restaurant’s design. Not to be outdone by the bar, the menu at Pinch will compete for the spotlight. Empire City Casino is partnering with one of most significant culinary organizations in the world, the name of which has yet to be unveiled, and Mark Advent, the creator of Las Vegas’ highly successful New York New York hotel and casino.

Famous restaurant consultant Clark Wolf has been hired to “rehab and refresh its current food and beverage offerings on property.” According to the release:

Under Wolf’s direction, Empire City Casino’s open station food court will undergo a complete overhaul and be reintroduced as The Big Kitchen at Empire Plaza. With over 340 plaza seats, The Big Kitchen will feature an all new coffee bar and five distinct cooking stations, including New Original Ray’s, The Fry Shack, Empire Grill, Canton Kitchen and Noodle Shop, and Corner Deli. The Main Stage lounge and bar at the center of the property will entertain guests with an all-new cocktail program that will feature signature mixes, as well as an Empire twist on some of New York’s classic cocktails. The popular Nonno’s Italian restaurant and the lively trackside Empire Terrace Restaurant will both enjoy menu enhancements and regular promotional events. Other upgrades and additions are planned for the property in the near future, including the revamp of the conveniently located trackside Grab ‘N Go which will not only be renamed but also upgraded into a full service grill with a little Latin flare.

“Having worked with some of the biggest names in gaming throughout Las Vegas and Australia, I can tell you that these are world-class gaming floors and they deserve the kind of world-class food and drink offerings people have come to expect from casino properties like these,” said  Wolf in a statement. “And that’s exactly what they’re going to get here at Empire City.”