People are reading
You are at:Home»Food Links We Love»Notes From the Captain Lawrence Tasting Room, Vol. 32

Just as Martha Raddatz was grilling the vice presidential dudes in Kentucky, a moderator was firing picayune questions at some other hopefuls with their eyes on a different prize at the Captain Lawrence tasting room in Elmsford. Indeed, it was the brewery’s fortnightly Trivia Night, and the players had come to play. 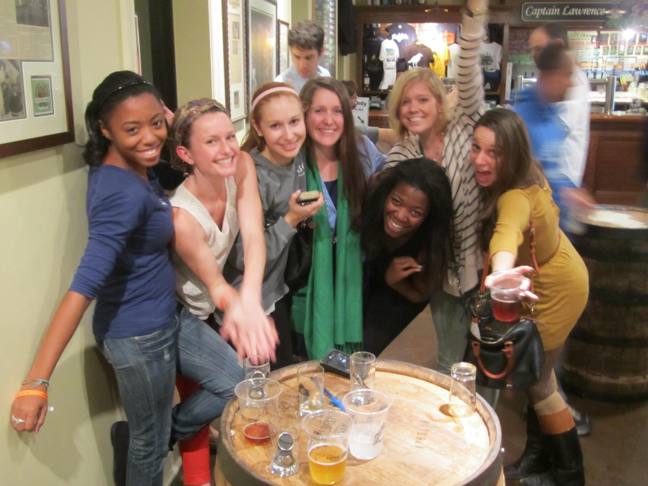 “Quiztina Aguilera” in the house!

One staple of Captain Lawrence trivia—other than drafts of really good craft beer, such as the season Katchkie Harvest Ale and newcomer Spam Spelt Amber Ale, flowing freely a few feet away—is truly bizarre team names. Some feature double and even triple entendres, and a few are even printable in mainstream publications.

“We usually go to the city for trivia night, but it’s nice to come here for a change,” Danielle says, sipping her Pumpkin Ale happily. “It’s a nice relaxed vibe—you’re not here to impress anyone.”

To emphasize the point, Danielle displays her casual t-shirt and jeans outfit with a flamboyant flourish, an ensemble topped off by the crisp new hat. 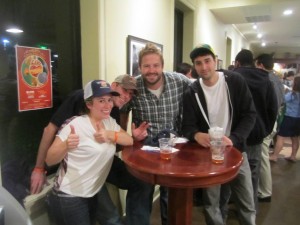 Gruesome Twosome (There are 4) picked up some hats at Captain Lawrence Brewing Trivia Night.

Their two new teammates and friends are Peter of Highland Falls and Todd of Minneapolis, the latter in town to build a water tower down the street. “I came from long and far to play,” says Todd, displaying a Minnesota driver’s license for proof.

After another round of questions, whose answers ranged from Crimestoppers to the Smurfs to Mission to Mars, the prize is awarded for best team name. Five bottles of the Belgian-style ale St. Vincent’s Dubbel are bestowed upon the fine fellows of **** Your Honda Civic, I Have a Horse Outside. The team members explain the name—a reference to a song by a Scottish, or perhaps Irish; punk, or perhaps it’s hip-hop; band called the Rubberbandits. (For the record, I noticed a few Honda Civics outside the brewery, though no horses.)

Next to the Honda Civic/Horse Outsides are the ladies of Quiztina Aguilera, friends from Ossining whose energy level resembles that of a bachelorette party. “We’re so bad,” laments Toro Adeyemi as she sips an Imperial IPA (“The biggest bank for your buck,” she explains). Yet the Quiztinas’ subpar performance has, to their credit, not subdued their mood.

It is on to the final round. Moderators Nick Schwartz and Austin Ashley, doing a much better job than Jim Lehrer did in Round I of Obama-Romney, ask the name of the movie, directed by Peter Jackson, of Lord of the Rings fame, that featured a Sumatran rat monkey who causes a zombie outbreak.

The pensive poses commence–fingers running through heads of hair, or covering noses, with eyes closed. There are slow, pained exhales and hushed debates like frazzled Family Feud contestants. Someone purposely shouts out wrong answers—a brazen attempt at misinformation. 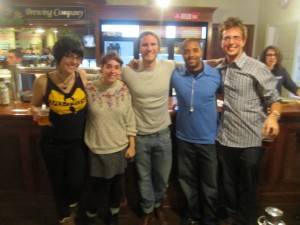 More questions, more stressful silences, and finally the answers. When the dust settles, it is a team called Sheeeeeeets—that’s seven e’s, if you’re scoring at home—that has grabbed the grand prize. They’d tried Trivia Night one other time, but didn’t have it together like they did today. “I wasn’t here,” explains Chris Terry of Mamaroneck as he sips a Pumpkin Ale. “I am the missing link.”

Andy Dillenbeck of Eastchester spent the day studying current events to prepare. Sheeeeeeet-mate Kyle Bensen of Pleasantville said they saw the prizes at stake—a Captain Lawrence gift basket, which includes a t-shirt, specialty bottle, pint glass, hat and growler refill, among other goodies, for each member—and simply would not settle for second.

“We opened up our brains tonight,” says Bensen.

Come to think of it, that’s pretty much what happened in that Peter Jackson zombie movie, Braindead, as well.

The Quiztinas take their loss in stride, boogeying together to Toto’s “Africa” as the tasting room starts to clear out. “We won t-shirts before, so we keep coming back to try and win,” says Toro. Only problem is, she adds, “we suck.”

Regardless, Quiztina Aguilera will be back for the next installment, a Halloween-themed one, October 26. Toro says she would like to see more “feminine” trivia questions, and fewer about video games, zombie films, and other bro-friendly fare.