Hello all! My name is David Dallow and I blog at WestchesterFoodie.com. In the past Liz has graciously allowed me to write restaurant reviews during Hudson Valley Restaurant Week and has decided to bear my virtual presence more often! I look forward to (hopefully) entertaining and informing you on a regular basis. If these small bites leave you hungering for more (Pun intended. Sorry.) you can find my blog here, where, along with my lovely FoodieWife I cover food related items that range from the interesting to the inane. I’ll let you be the judge of which is which!

School lunches have been thrust into front page news with the high profile advocacy of First Lady Michelle Obama and celebrity chef Jaime Oliver. Both have lent their considerable talents and vocal support to both nutritional education programs as well as the creation of healthy lunch alternatives that even the most finicky of children can love.

Last weekend, the New Rochelle school system got involved in its own high profile way by participating in a school lunch cook-off with  food television personalities Guy Fieri, of Diners, Drive-Ins, and Dives fame, and Rachael Ray, of, well, pretty much every type of fame. The stage couldn’t have been larger, a standing room only crowd packed in the test kitchen at the 2012 New York City Food & Wine Festival, on Pier 36 in Manhattan! 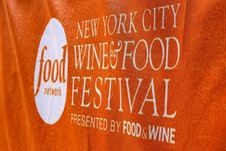 The excitement was palpable as the teams were assigned their chefs. Rachel Ray led a team of three education professionals from West Babylon, Long Island, while Guy Fieri landed the squad from New Rochelle. The team, comprised of Dr. Adrienne Weiss-Harrison, Medical Director for the City School District of New Rochelle, Dr. Monifa Tippitt, House Principal at New Rochelle High School and Debra Kohn, a teacher at Daniel Webster Elementary School, seemed game and ready to rise to the occasion. 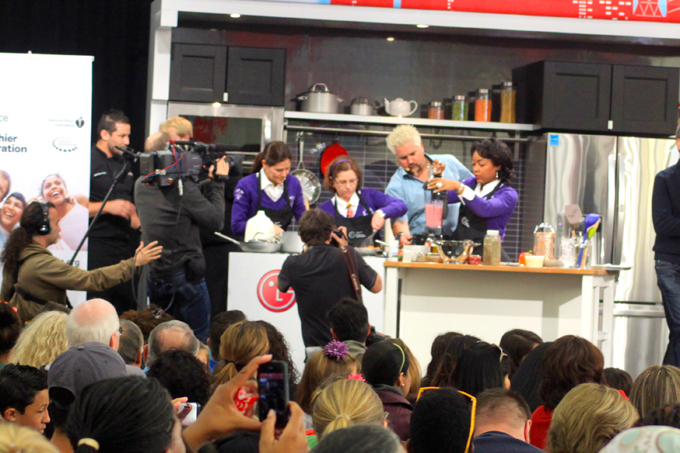 The competition would be held in an Iron Chef-like format with each team choosing between two offered proteins around which they would create their meals. After winning a coin flip, Team Fieri/New Rochelle chose chicken thighs, leaving Team Rachel Ray/West Babylon with lean ground beef. As in Iron Chef, this contest would be decided by a panel of celebrity judges. However, as the target audience of these meals would be kids, so too would the judges panel be comprised of them. 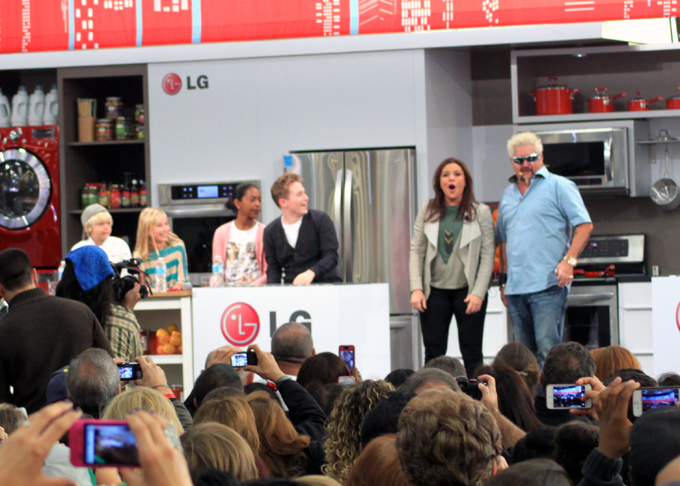 First, two judges were chosen from among the enthusiastic crowd of children assembled to watch the battle. After Alex, a young lady hailing from New Canaan, CT. and Kiara, of Jamaica, NY were picked, the panel was completed by Reed Alexander, of iCarly fame, and Jack Witherspoon, child chef, cookbook author and occasional television personality.

At last, the cooking began in earnest with team Fieri/New Rochelle furiously pounding chicken thighs thin before dredging them in flour and crushed bran flakes, a healthier take on the beloved chicken finger, and Team Ray/West Babylon hurrying to brown ground beef and cook sweet potatoes. Though under time constraints and the pressure of a grand stage, the class of New Rochelle did themselves, and all of Westchester proud, turning out a healthy and delicious meal, comprised of the aforementioned chicken fingers, sweet potato macaroni and cheese and a fruit smoothie before the time ran out!

After the judges tasted both dishes, Team Fieri/New Rochelle was narrowly edged by Team Ray/West Babylon’s whole grain tortillas, ground beef with beans and mashed sweet potato and cheese. However, judging by the reactions, either dish would be a winner on a school lunch menu!

Target, co-sponsoring the event with Guy Fieri, donated gift cards for the benefit of the schools as prizes. The entire event was fun, exciting and educational and if I could have gotten a taste of those chicken fingers it would have been perfect! 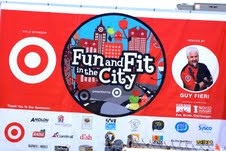