People are reading
You are at:Home»Food Links We Love»Benjamin Steakhouse, Hartsdale, NY: Best Of Both Worlds

This post turned out very different than I originally imagined it. It started out as a potential new feature where I speak with local chefs and get tips in their particular area of expertise. After speaking with the good folks at the Benjamin, their Executive Chef Arturo McLeod generously offered to meet with me for a video interview and, what I’d envisioned as Grilling With The Masters. It’s not that I didn’t do the video interview or watch a master at work, I did. It’s just that it turned into so much more than that. 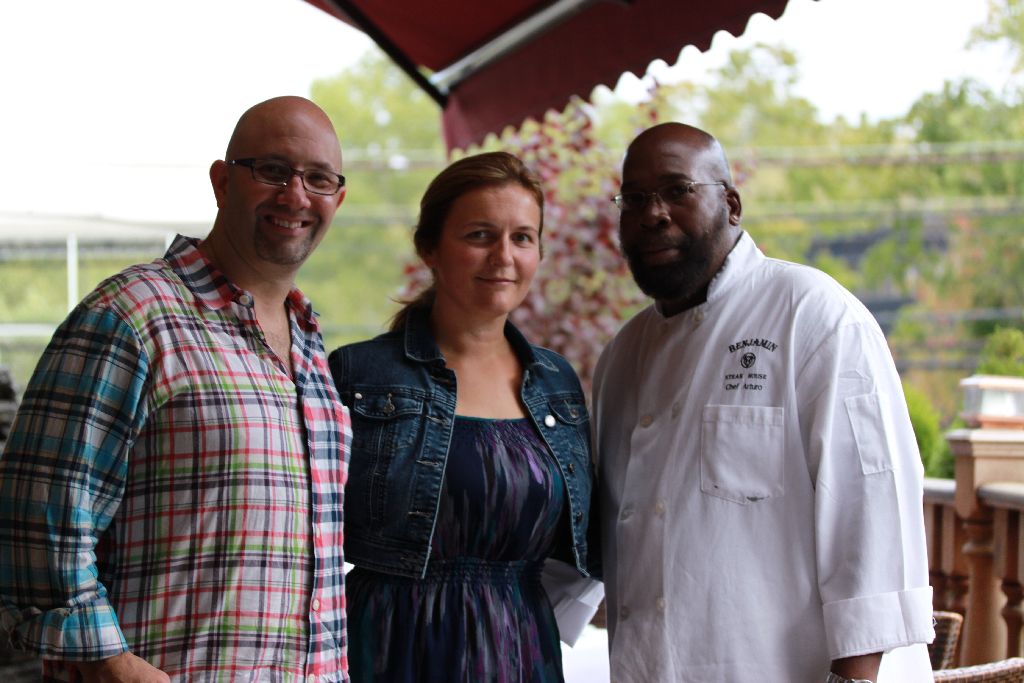 Allow me to explain: I’ve always had certain preconceived notions about steakhouses, as I imagine many others do as well. Power brokers in power ties chowing down on huge slabs of beef and washing it down with a 2005 Petrus, all on an expense account. I began to see steakhouses as corporate extensions of their patrons, soulless, sometimes publicly traded corporations, the testosterone charged culinary equivalent of a Gentlemen’s Club. And don’t get me wrong, if that’s what you’re looking for, Benjamin, Hartsdale can certainly be your place. Westchester has enough bankers, lawyers and hedge fund honchos to support exactly that type of environment. The dining room is beautifully appointed, luxurious really, with heavy drapes, detailed moldings and glossy wood accents. A glass encased wine cellar, complete with a private table for that special occasion, lines a wall across from a beautiful wood bar. According to Arbresha Sinanaj, the wife of one of the two Benjamins of the restaurant’s namesake (and sister of the other), this is the Benjamin Steakhouse experience on weeknights. 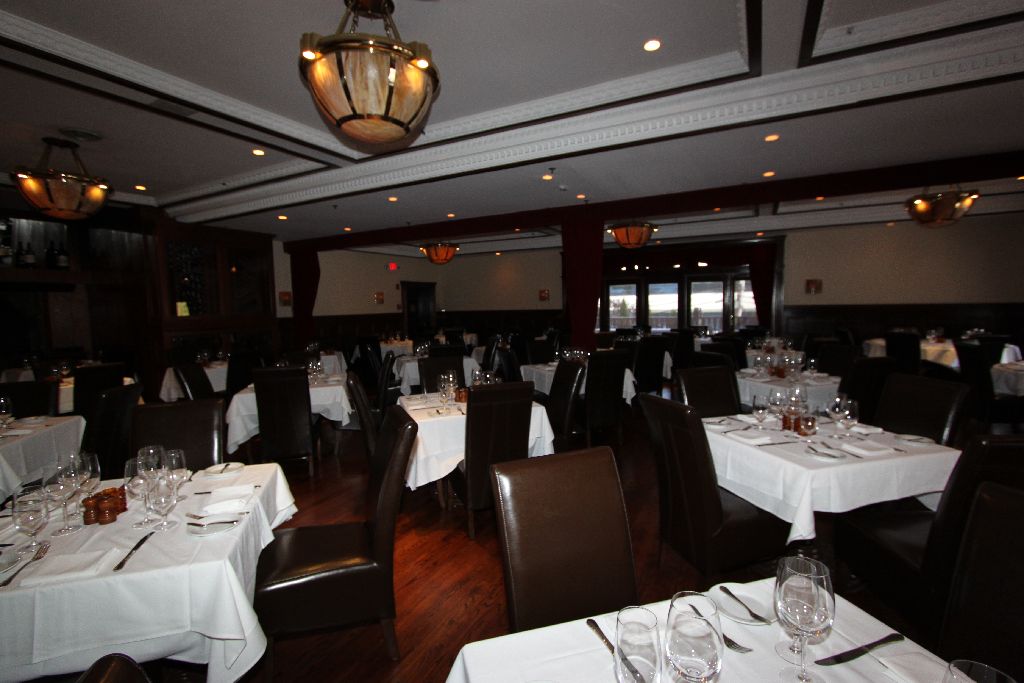 However, on weekends there is a subtle shift, from expense account playground to family restaurant. This is where my post, as intended, left the course I’d charted. Here I was, speaking with a woman who was the wife of one owner and sister of another as she painted a picture of a restaurant where she wants her children to bring their first dates one day and an establishment she still wants them to enjoy when they grow old. A restaurant where, on the weekends, local families can come for dinner. If the idea of kids at a steakhouse seems incongruous, imagine plate after plate of cheeseburger sliders rolling out of the kitchen before delighted little eyes. The kids may not realize that Chef McLeod cooks his fries twice, once to poach the inside to a fluffy consistency and then a second time at higher temperatures for a crisp, golden exterior, but they will know they’re fantastic. If you recognize that steakhouses are all about excess, then imagine that theory applied toward a child’s ice cream sundae dessert! The picture that came into focus was the exact opposite of the steakhouse as a soulless entity, but that of a family restaurant that enjoyed catering to families.

Of course, this whole experience was predicated upon interviewing Chef McLeod, so let’s discuss him for a moment. Chef McLeod, part owner and Executive Chef, cooks because he loves it. It’s as simple as that. He has a passion for what he does and it comes out whenever he talks about food. He told me a story about how, as a young man, he almost took another job for the stability and financial security of his family. Then working in the kitchen of Brooklyn’s historic Gage and Tollner, under famed chef Edna Lewis, the thought of leaving cooking saddened him so much he couldn’t do it. He joked that the job, for the sanitation department, would have allowed him to retire by now, but he’s thrilled every day with his choice. This passion leads him to source the best Colorado beef and lamb, and has him even questioning the classics. Having worked at world famous Peter Luger’s for 25 years, Chef McLeod saw countless dishes of creamed spinach pass through the kitchen, noticing the balancing act necessary to keep the dish from breaking down. This led him to create his Cream-less Spinach, garlicky spinach added to a roux and butter, resulting in a dish just as rich, possibly more delicious and much more reliable. His menu is full of small details which elevate classic steakhouse fair, such as the aforementioned double cooked French fries and boiling onions with his potatoes before mashing for an added depth of flavor. 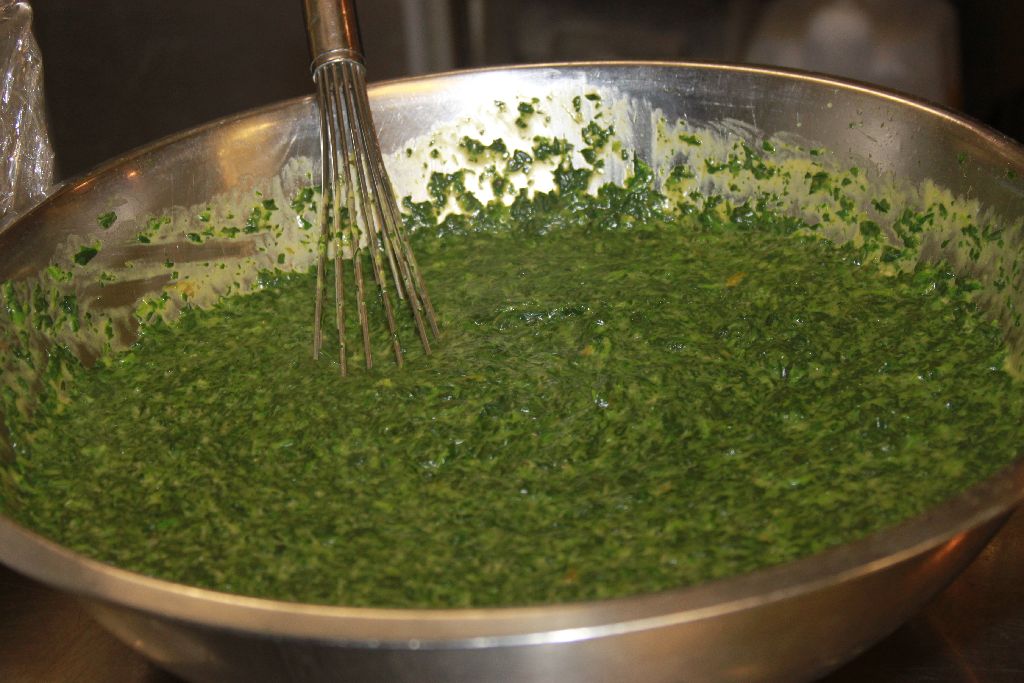 But where Chef McLeod really lit up was in his dry aging room, and I preach its virtues to you with all the zeal of the newly converted. Rack after rack of beef, Porterhouse, Sirloin and Rib Eyes slowly aging for 30 days at 37°, their juices and flavor concentrating in the center. The reason dry aged meat costs so much is the waste involved. The loss of moisture is a positive when it comes to flavor, but the shrinkage involved leads to a lower saleable yield. Add to that the fact that, as the beef loses moisture, discolored or dehydrated meat and fat must be trimmed from the outside. 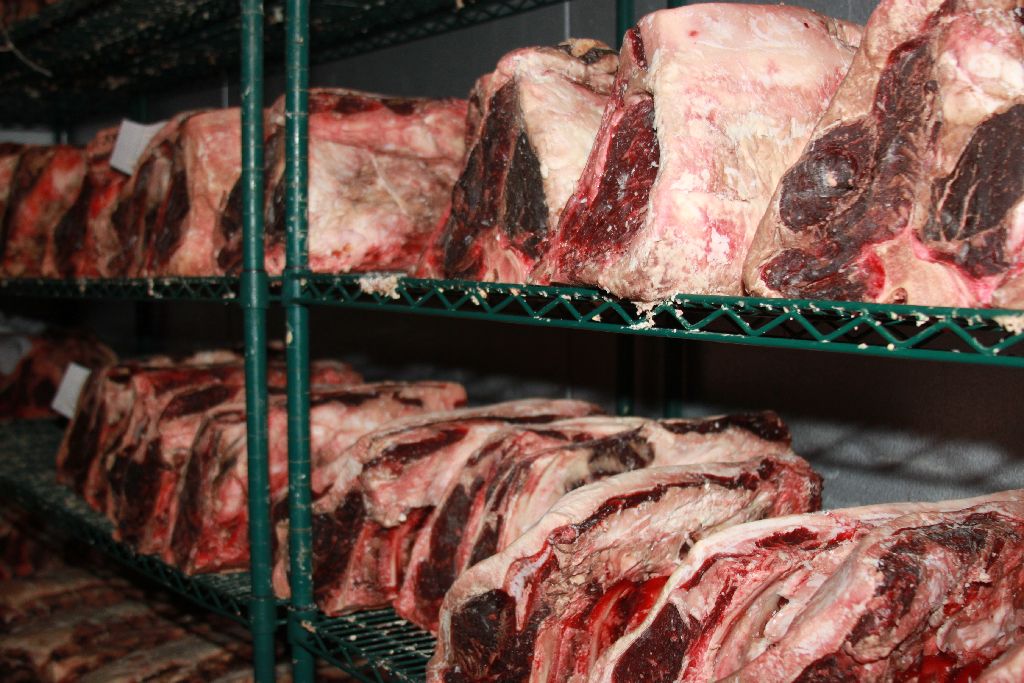 But the results……wow, the results. You will see, in the video that follows, the dry aged lamb chops we grilled. When you cook meat at home you need to let it rest in order for the juices to be reabsorbed into the meat. Because of the dry aging I was able to cut into these chops while still sizzling from the grill and see the juice glistening in the pink interior without having it spill forth onto my plate.  And the flavor! Everything that is great about lamb, its grassy, tangy essence was enhanced in the process. The other benefit of dry aging it that it creates a better, browned exterior. The combination of caramelized exterior and tender, juicy interior was incredible. I’m not sure if I’ve ever considered ordering anything besides steak at a steakhouse, but these lamb chops won me over immediately.

I’m grateful for the opportunity I had to see behind the curtain of this venerable steakhouse and peek at the human faces that keep it running at a high level. The Benjamin also has holiday menus. Their prix fixe Thanksgiving menu is $54.95 per person and their expansive Christmas menu, beginning service at 11 am and running until 11pm, is $59.95 per person. I can think of worse ways to spend a family holiday than with the Benjamin family. And a rack of lamb.

Lastly, I’d like to thank the lovely Raechel Szymanski, Event Coordinator and Patti Schwartz, Private Event Manager, for their help, communication and company while I was interviewing, writing, photographing and making a general nuisance of myself.