People are reading
You are at:Home»Food Links We Love»Notes From the Captain Lawrence Tasting Room, Vol. 34

The Balm Before the Storm

With an apocalyptic storm on its way, the music pumping out of the Captain Lawrence tasting room stereo could not have been more fitting:

OK, maybe I misheard some of the words—it was boisterous in there. But the tune nonetheless struck just the right tone in the tasting room with Hurricane Sandy lurking just off the coast. 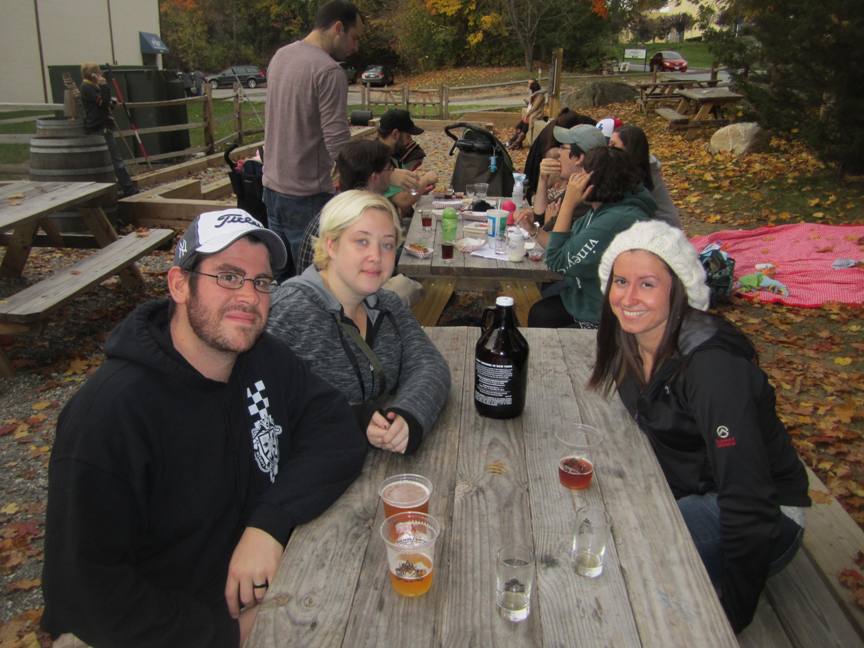 Mike Heinzinger of Yonkers, enjoying a few samples with wife Shayla and sister Gina, speaks of a “hurricane survival kit” he mastered during Irene, and deployed when talk of Sandy came about. With the Captain’s Reserve Imperial IPA’s tendency to run out in the tasting room—it’s many people’s favorite Captain Lawrence creation–Mike moved the brewery visit up on his to-do list. “Today I got up early to stock up on the Imperial IPA,” he says, gesturing at the perspiring growler in front of him.

Not everyone had such foresight. Jesse Bender is a pretty organized guy; after all, he’s a doctor at a prestigious hospital up in Providence. Unfortunately, the dozen or so growlers he and his wife Amanda, of Somers, collected over the years are still up in Rhody.

Jesse ticks off his survival kit list: Charge up the electronics, stock up on water, fill the gas tank, fill the growlers. He’s kicking himself for botching the latter.  The next best solution is to enjoy a few while on site; Amanda is quaffing the Imperial IPA (“My old standby…tons of hops—I’m a fan,” says Amanda), while Dr. Jesse is sipping an oddly named rookie amber ale. 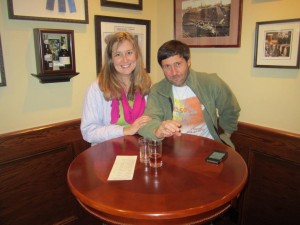 The concern level in the tasting room appears moderate, most predicting a wet and windy nuisance more than a calamity. Much of the non Sandy conversation centers on Halloween, which Mother Nature has made an effort to wipe out these past few years.

With hubby Jesse’s medical scrubs and a friend who owns a jello mold shaped like a brain, Amanda Bender has a relatively easy costume in the works: Brain surgeon.

Sticking with the theme, Jesse quips that he’ll dress up as Abby Normal—the name given to the abnormal brain in Young Frankenstein.

People discussed their favorite Halloween memories; for Mike Heinzinger, it was 2001—hanging at a party, dressed as The Dude from The Big Lebowski, when Tino Martinez hit that unforgettable World Series homer against the D-backs in the bottom of the 9th. He grows wistful as he recalls the days when the Yankees actually hit in October. 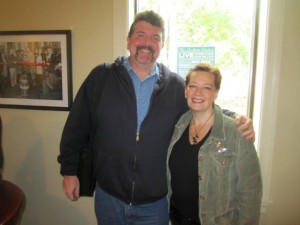 For Sheena Moran of Riverdale, who livened up Notes From the Tasting Room, Vol. 32 with boyfriend Danny McCarron, it was going to see Friday the 13th before trick or treating out in Mahopac in a witch costume. “It terrified the beejeezus out of me,” says Sheena, whose ax-wielding brother also contributed to the fear factor that day.

Going back a bit further, Jim Hoffman of Hartsdale offers fond memories of dressing up as a red fox—the animal, not the star of Sanford & Son.

With both a massive storm and a holiday on tap, it seems as though nobody is, for a blessed few hours, discussing politics. But it’s worth mentioning that Captain Lawrence is marking Election Day in its own fitting way: By putting a long lineup of experimental brews on the ballot, and the tap system, Nov. 6–and letting guests decide who wins.

Staffer/troubadour Evan Watson heartily endorses his own Beezerker Heather Ale. “It’s the Ron Paul of beers,” he says. “It’s gonna tell the truth, though I don’t know if a lot of people will vote for it.”

Despite the Talking Heads’ ominous lyrics, the tasting room mood is festive—people anticipating a long weekend, compliments of an All Hallows Eve visitor known as Frankenstorm. “I’ll be destroyed if I don’t have to go to work on Monday,” says Mike Heinzinger, with all the truthfulness of a political ad, as he sips his beloved Imperial IPA.