People are reading
You are at:Home»Restaurants»Restaurants Damaged in Sandy Vow to Rebuild 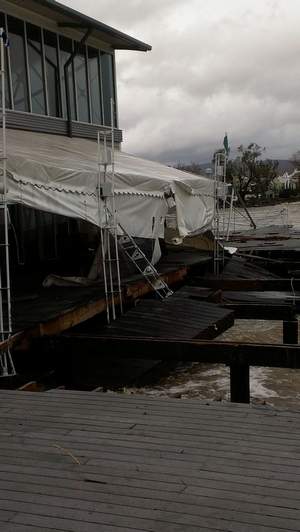 During Superstorm Sandy, water from the Hudson River knocked out part of the glass front door of MP Taverna in Irvington and bobbed and swirled its way into the bar, the dining room and kitchen, picking up appliances, pots, pans, china and glassware and then depositing them all over the restaurant.

“The only way to explain it is that it was like a hurricane went through the restaurant,” said Michael Psilakis, the chef-owner. “Cushions were 10 or 15 feet away on the other side of the room. Everything was in complete disarray. It was as if somebody came in and was just throwing things around.”

Restaurants like MP Taverna in waterfront communities around the lower Hudson Valley suffered damage from the storm that may take weeks, even months, to repair. Other restaurants lost thousands of dollars worth of food when their walk-in coolers were without electricity. Yet on the flip side, other eateries are experiencing a boom in business, as customers without power come in for three meals a day.

“All the bars around White Plains are doing extremely well,” said Koshy Chacko, the owner of the Fair Deal Cafe on Mamaroneck Avenue and the president of the Westchester-Rockland chapter of the New York State Restaurant Association. “And because people can’t cook at home, my breakfast and lunch volume has gone tremendously up.”

But at Red Hat on the River in Irvington, owners Mary Beth and Jim Dooley are ripping out floor boards and replacing Sheetrock, banquettes and the electrical system. They are crossing their fingers the rebuilding will take about a month.

Chutney Masala in Irvington is also closed. In Dobbs Ferry, Half Moon took on four feet of water but will likely open today or Wednesday with a limited menu. In Piermont, the main drag, Piermont Avenue, looked like a lake.

Deborah Brenner, a co-owner of Portofino in Piermont, said she and her partner, Jack D’Amico, couldn’t even get into the restaurant. There were sailboats in the yard there, and at Cornetta’s down the street.

“Everything floated off its foundations, and huge pieces of equipment were everywhere,” she said. “Major freezers full of frozen food just floated to the back stairs from the inside of the restaurant.”

On the east coast of Westchester, swells from the Long Island Sound bulldozed sand up the beach; it was six feet high against the door to the sundry-snack shop at Seaside Johnnies in Rye, and in order to drain the water, workers had to dig a canal from the restaurant to the ocean.

“It took my breath away, the amount of damage,” said Sam Chernin, a co-owner. His other place, Pier Restaurant & Tiki Bar on the boardwalk at Playland Amusement Park, also has a lot of damage. Both restaurants were closed for the season, and Chernin said they’ll be able to open again on their usual spring opening dates.

“If there’s such a thing as it happening at a good time, we have all winter to get ready,” he said.

The Hudson Water Club in Haverstraw took on about eight inches of water. The carpets are ruined and the deck is splintered, half-submerged and full of debris. Executive chef Michael Dobias said the restaurant will be closed at least three weeks, and he had to lay off half his staff.

And everyone is determined to rebuild. Mary Beth Dooley, of Red Hat, said the phoenix image keeps coming up.

“We don’t want to telegraph this notion that we’re gone and not coming back,” she said. “We’ll be back with a vengeance. It’ll be some time, but we’ll be back.”