Fall Restaurant Week has arrived, and that’s all it took to encourage my wife Judy and I to head out once again to explore some of the great restaurants in the Hudson Valley.  With an impending nor’easter heading our way we decided we better start right away so we headed over to Rosie’s Bistro Italiano in Bronxville. Hi. I’m John Fix, returning for another season of guest blogging for HVRW.

Rosie’s is a cozy restaurant located on the corner of Palmer Ave and Paxton Ave.  (I borrowed this photo from its web site because the exterior was blocked with cars waiting in line for gas the night I was there.) There is a large bar area when you enter, and then a long dining room that runs along the wall behind the bar.  We were seated promptly and presented with both the full menu as well as the Restaurant Week special menu.

For appetizers my wife and I both initially chose the special beet salad, but not wanting to both try the same dish my wife decided to try the Clams Oreganata. The clams with pancetta were perfectly cooked and made a great starter for the meal. 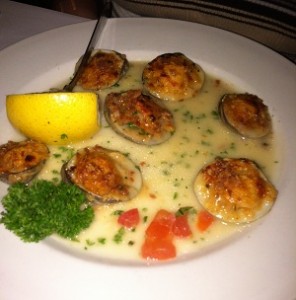 The Roasted Beets & Endive salad included crumbled gorgonzola cheese and pecans with a house vinaigrette dressing.  It was wonderful, and the portion was almost too large to be considered an appetizer.  Judy tried a few bites of my salad and thought it was one of the best salads she’s ever had. 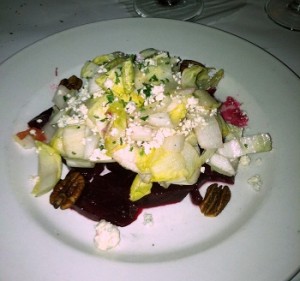 For a main course Judy ordered the Chicken Sorrentino. It consisted of chicken medallions layered with prosciutto, eggplant, and melted mozzarella in a tomato white wine sauce, and it was served with mashed potatoes.  It was a great choice for a cold late fall evening.  I snapped a photo but it came out fuzzy and did not do the dish justice.  It was also a large portion, enough so that we brought home some extra for lunch the next day.

I chose the Yankee Pot Roast which came with mashed potatoes (of course!) and peas.  This also was a great choice on a cold evening, just the right kind of comfort food to warm up and fill up at the same time.  The beef was tender and flaked apart with a fork.  The gravy was delicious, especially paired with the mashed potatoes. The portion was again quite ample, but I was hungry so finished it in short order. 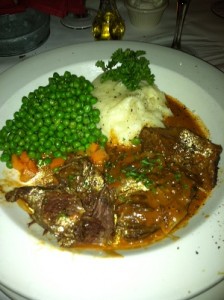 For dessert Judy chose the Coconut Gelato which was light and refreshing, even if it was three full scoops. 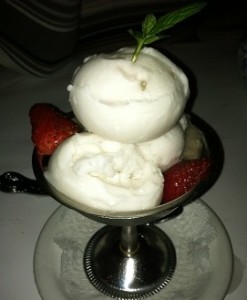 Even thought I was pretty stuffed from the wonderful pot roast I decided to go all out and try the Torta di Formagio, a New York style cheesecake with dark chocolate drizzle and Amarena cherries.  There was just part of one cherry, as well as a slice strawberry, so perhaps the description was not 100% accurate.  However, it was rich and creamy and a perfect finish to a great meal. 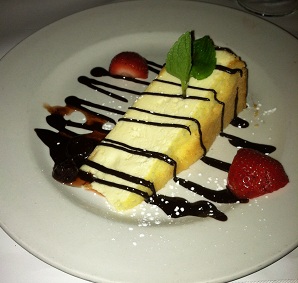 We have added Rosie’s to our list of local eateries that we will frequent in the future.  Now, where to go next for our restaurant week tour?  Stay tuned.

The 411 on Rosie’s Italian Bistro.