Hello everyone! Sally Veltidi here. I am excited to be back for a third edition of Restaurant Week! I was really excited to hear that Hudson Valley was having a Fall Restaurant Week this year.  A group of my friends and I decided we would take part in this opportunity and enjoy a new restaurant.

My friend John recommended that we go to Gaucho Grill on North Broadway in White Plains.  Gaucho Grill is an Argentinean Steakhouse. I had never heard of the restaurant before, but I am always willing to try something new, so was excited to see what it had to offer. We did find out that Gaucho Grill has been open for less than three months. We had a reservation for Tuesday Night (Election Night) at 6:45pm. A few of us met at the bar prior for a drink. John and Joanne, and Mike martinis (Espresso and Dirty) and Nicole, Gina, Jamie and I enjoyed a glass of Pinot Noir from Argentina. All drinks were wonderful.

The bar area was very nice. It was separated from the rest of the restaurant with a curtain. The stools were tall and black leather and very comfortable. Our table was ready when everyone got there, and we were seated. The dining area was open and had white table clothes with black napkins. The whole restaurant was very classy looking and had a nice vibe to it. We were seated at a large round table for 9.

We ordered drinks and looked over the restaurant week menu. (We were given the regular menu as well, but all opted for the Restaurant Week Menu). The Restaurant Week Menu has 6 appetizer choices, 7 entree choices and 3 dessert choices. I sat between my friends Joanne and Jimmy. We each choose something different to try and so we could taste each others. 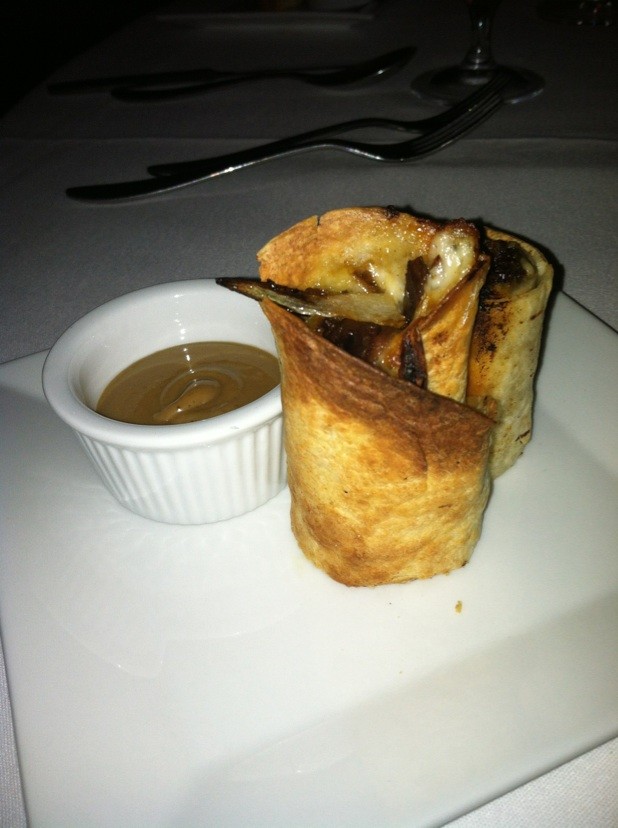 The duck roll was sweet and very tasty. I really liked it. I wasn’t sure how I was going to feel about the cheese with the duck, but I loved it! You were able to taste and pick out each of the ingredients in the wrap. The dipping sauce was a spicy mustard that was not needed to enjoy the dish, but added an extra different twist to the experience. 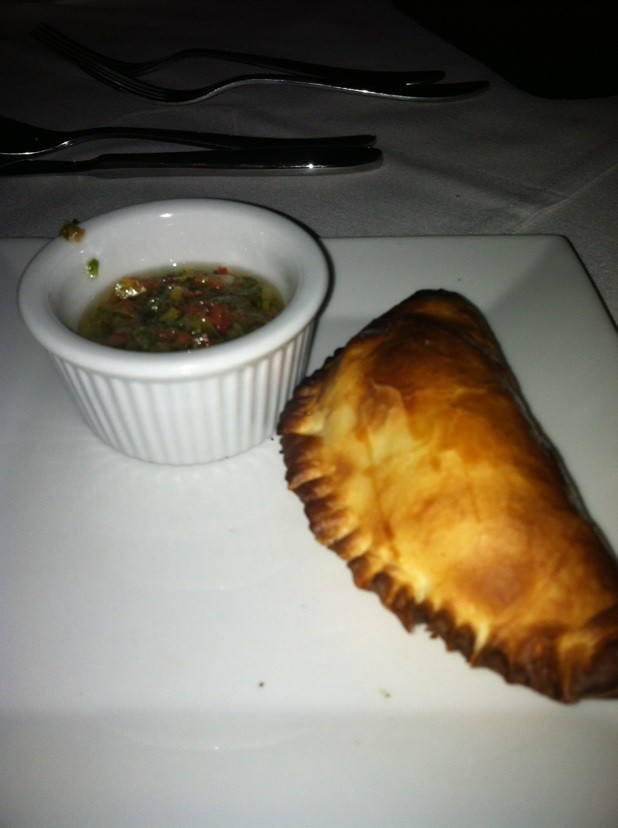 I did not try this appetizer, but Jimmy said the chicken was evenly spiced and moist. He really liked the Chimichurri dipping sauce that came with the empanada. 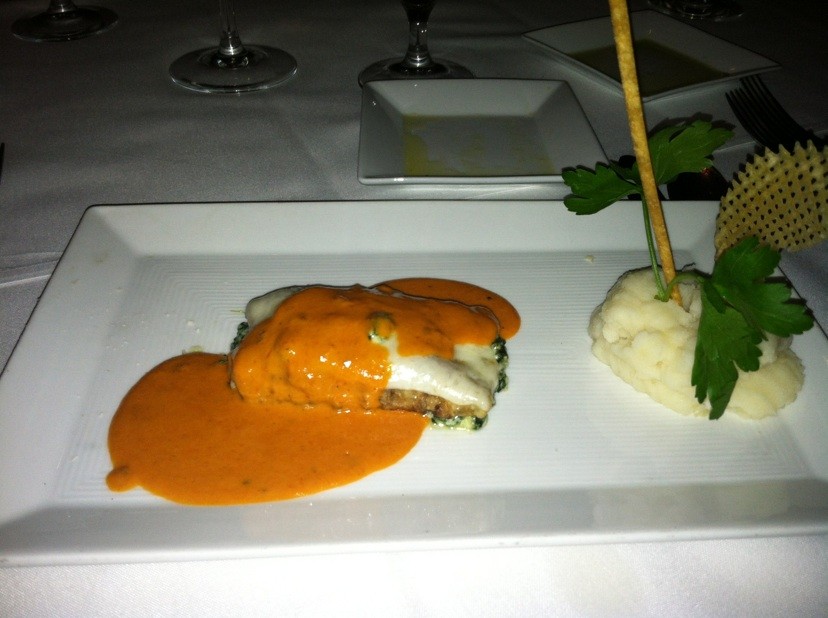 I love all Eggplant Rollatini and this variation was no exception to the rule! It was very different to the traditional Italian version, but just as good, if not better. The filling was a nice combination of cheeses and spinach and the Cognac Sauce on the top was similar to a Vodka Sauce but with a nice bit more of a kick to it. Not a spicy kick but a bit more flavor. This was served with mash potatoes.

For the Entrees. Joanne and most of our other friends ordered The Argentinean Churrasco- Classic Argentinean Skirt Steak, Chimichurri sauce. 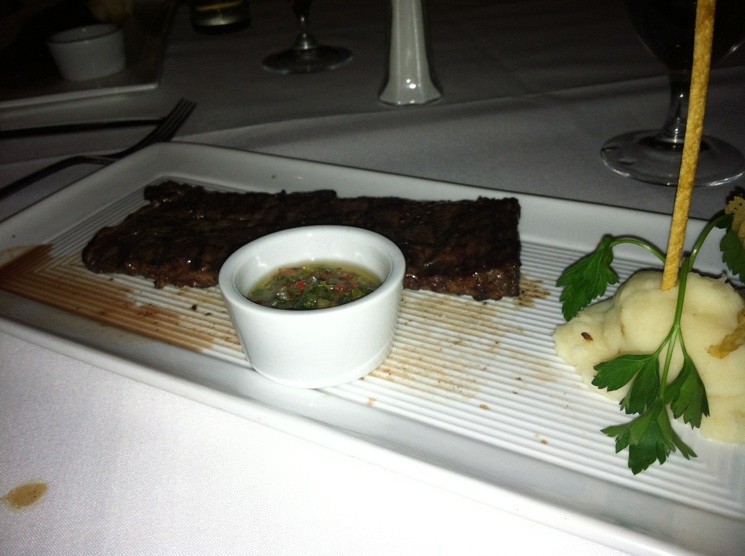 This was served with Mashed Potatoes as well. Joanne said “the steak was AMAZING. It was cooked to perfection, a bit crispy/charded on the outside and perfectly medium on the inside. The Chimichurri sauce was a nice addition to the steak but the steak itself was perfect the way it was” 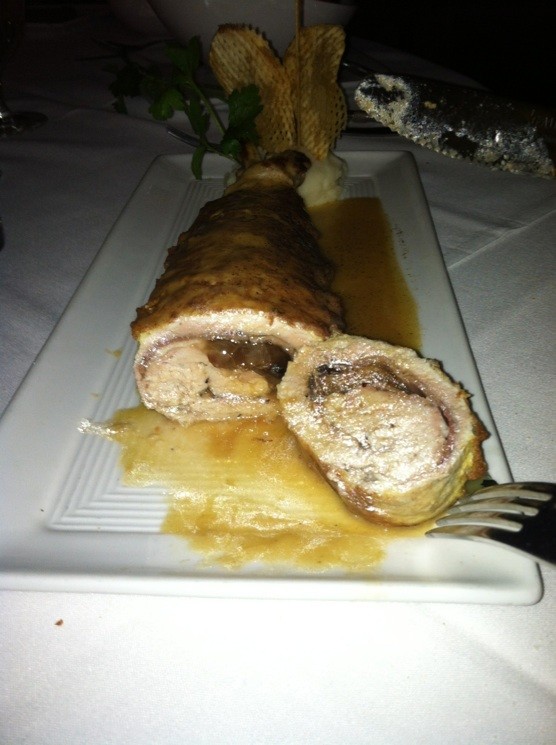 This was like nothing any of us had ever seen before! The pork was tender and juicy and the flavor combination was to die for. We asked the waiter how it was made and he explained to use the it was pounded and rolled out and then stuffed. This picture does not do this meal justice by any means! If and when you go to Gaucho Grill (which you should as soon as possible) you or someone you are with HAS to order this meal! 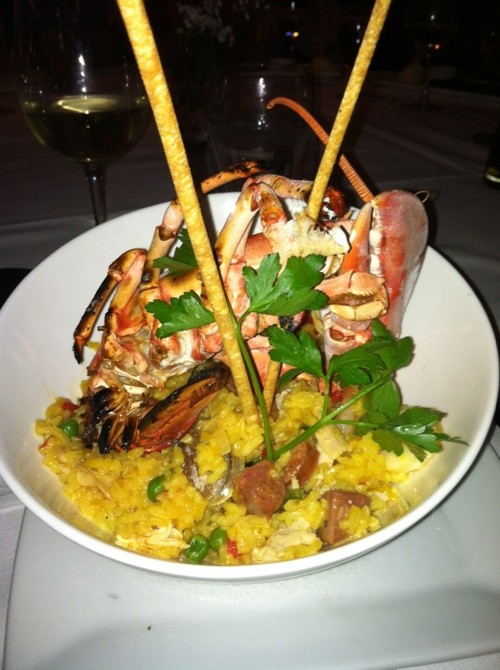 Yes, that is a half of lobster you see in this dish! It was so good. Each type of fish was cooked perfectly, the chorizo had the right amount of spice to it, and the rice nicely held everything together. I was only able to finish half of it, so I am looking forward to eating the rest for dinner this evening. This is not something I would traditionally order, but I am very glad I did.

Gina got the Gnocchi Broccoli Rabe Pesto -Homemade Gnocchi, sausage, Broccoli Rabe Pesto Cream Sauce.  I do not have a picture of this entree, but it was did have a taste and it was delicious. The gnocchi was some of the lightest I have ever had. The cream sauce was also light and refreshing. Traditionally both gnocchi and cream sauces are heavy, but this was not the case for this dish. The flavor and texture combinations were perfect and a real treat. 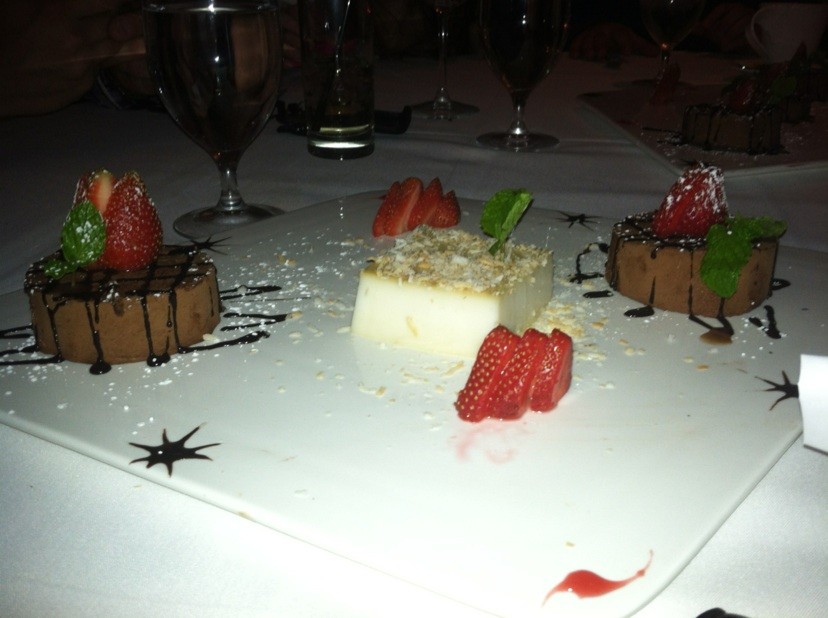 Pictured is the Mousse and Flan which were both great. Mark order the Tres Leches and I tried it. It was very good and I know he enjoyed it as well.

I would recommend that everyone tries the Gaucho Grill. The menu has variety and something for everyone. The service and the atmosphere were excellent. Next to the dining room was a smaller dining room that sate 75 people and could hold 100 for a cocktail party. The manager told us that on the weekends, both rooms are open and filled to capacity. Complimentary Valet is available. It was a wonderful evening with great friends, food and laughs. Pictured below is our group after the meal happy and full! (John is missing he had to leave before we took the picture) 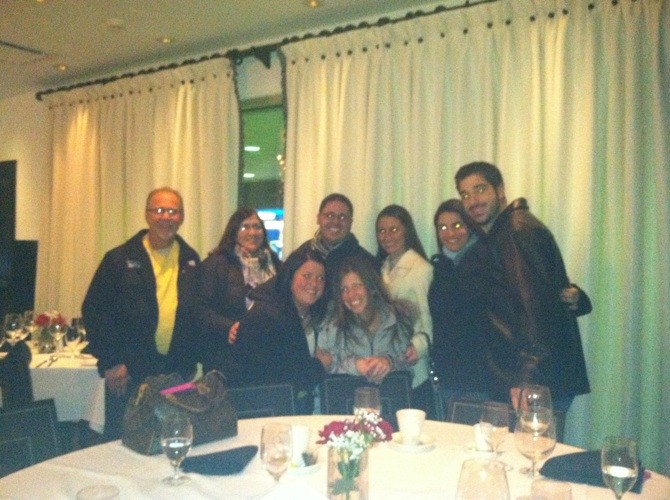 The 411 on Gaucho Grill is coming. Until then, here is the website: gouchogrillnewyork.com