People are reading
You are at:Home»Food Links We Love»Notes From the Captain Lawrence Tasting Room, Vol. 36

The polls were open, and the voters took their civic responsibility seriously—thinking long and hard about who deserved their hard-won vote. It was Captain Lawrence’s first-ever Pilot Batch Election, with a dozen small-batch creations from the brewery’s experimental brewhouse vying for top honors. 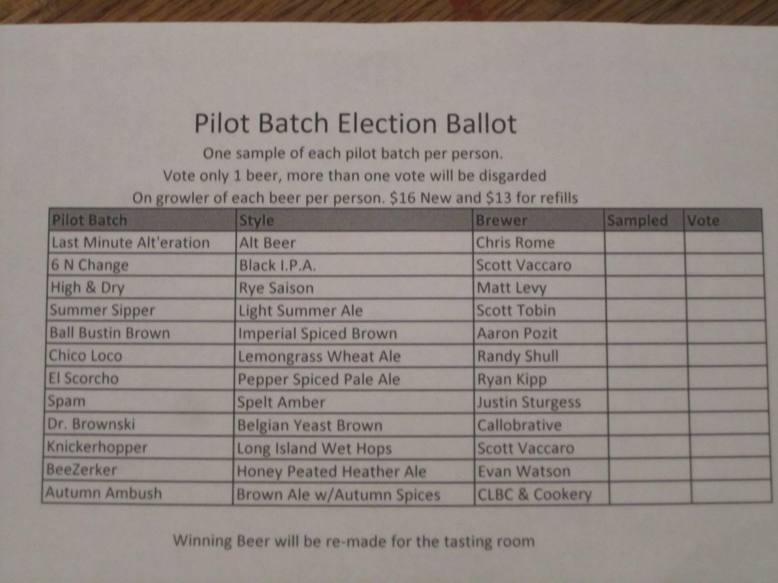 Political correspondent John King and his Magic Wall were not in Elmsford November 6, announcing the latest Election Day developments, but he probably wishes he was.

Which brew was favored? Randy Shull’s Chico Loco, a lemongrass wheat ale, was a huge hit in the summer, but the ballots would reveal if it held the same allure amidst an unseasonable November chill. Aaron Pozit’s Ball Bustin’ Brown, an imperial spiced brown ale, went over real big at both his wedding and the tasting room, and was sure to garner a solid batch of votes. The High & Dry Rye Saison and the El Scorcho earned tasting room raves too, while the Captain himself, Scott Vaccaro, had two brews on the ballot—bringing both a boldface name and big-league brewing chops to the contest.

Indeed, Scott’s Six N Change, an inventive black IPA, dry hopped with citra hops to mark Captain Lawrence’s sixth (and then some) anniversary, had momentum early in the voting. “The flavor, the smell, it’s very good,” says Sharon Rodriguez of Valhalla, escaping a dark home with her husband and son in the tasting room. “I was never a beer drinker—until Captain Lawrence,” she added, knocking on the table for emphasis. 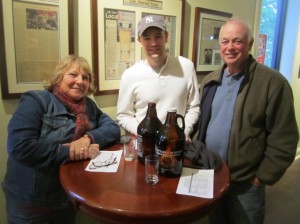 Husband Bill and son Bill Jr., who brew beer together at home, agreed on the Six N Change. “It’s the pick of the litter,” said Bill Sr. “Make sure the boss gets his due.”

Yet a wide range of beers were ringing up votes. Gabriel Freiberg of Ardsley was partial to the High & Dry, which got a vital endorsement from Westchester Magazine’s celebrated food critic, Julia Sexton, who put Matt Levy’s brew on her list of Five Most Delicious things consumed in October.

Gabriel is a fan of “Belgianish” beers. Tablemate Eddie Fang was at a loss for words as to why he loved Evan Watson’s BeeZerker honey-peated heather ale. “On the light side…not as heavy…it’s hard to describe,” he said.

Their friend Mike Coulehan, who works at the brewery, liked the Dr. Brownski…and the El Scorcho…and the BeeZerker, High & Dry and Chico Loco. “It’s a tossup,” he conceded.

Max Hunter, also of Ardsley, loved the Last Minute Alt’eration, but was not enjoying the democratic process all that much. “I don’t like being forced to make a decision,” he said. 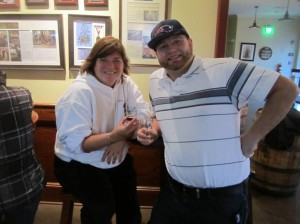 Todd and Muffy Smith of Stamford too had a tough time deciding. Muffy described herself as a “seasonal” beer drinker—a fan of the Chico Loco…and the Summer Sipper…and the Autumn Ambush, BeeZerker and Spam Ale. As long as it is during a season, presumably, Muffy enjoys beer.

Todd was leaning toward the Six N Change, but felt bad leaving the other 11 off the ballot. He casted a vote for Madness: “They should do it NCAA basketball-style,” he said. “A bracket of 64 beers.”

As the night progressed, the paper ballots filled an old beer bucket behind the bar—a system only slightly less sophisticated than what voters were using around the county. The Beastie Boys rocked the PA system. The in-house brewers looked around the room, and listened in at the bar, to see what people were ordering—and voting for.

Not long after closing, the votes were counted, and the verdict was rendered. It was historic—America had elected its first black IPA. The Six N Change had prevailed, its 36 votes ahead of the High & Dry’s 26. A fresh batch will be brewed, and ready for all to enjoy by the end of 2012 or early 2013.

“I had to show them all how it’s really supposed to be done,” said Scott with a grin. “The old guy’s still got it.”