I am a chain restaurant wait staff survivor.

During my tenure as a struggling undergrad, I took a few gigs slinging themed mixed-drinks and bar nibbles at a handful of franchised eateries. What I took most from the experience was… a pocketful of spending money from a job that was pretty easy to fit in to my student’s schedule. But aside from that I also gained the need to sympathetically over-tip and refrain from making one too many requests during my visits. Since my days cocktailing in the Dave & Buster’s game room, it’s been pretty hard to get me to give less than a 15% tip and fairly easy to get me to accept sub-par service. 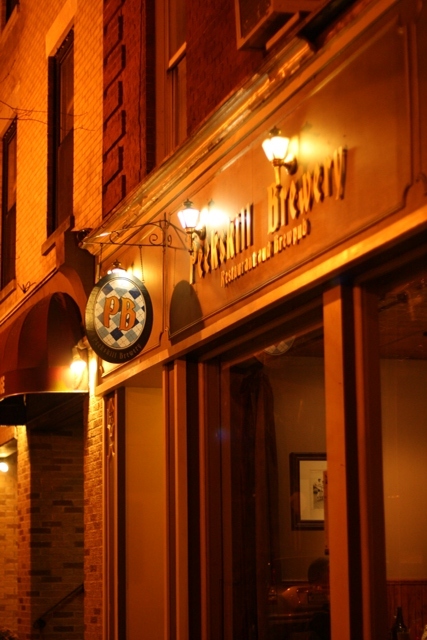 Peekskill Brewery may have just changed that.

Though I’m from lowest of the lower Westchester (Yonkers, to be exact), I had been pretty stoked to check out Peekskill Brewery long before restaurant week ever rolled around. My husband and I fans of craft beer and even trekked up to the (some say) ill fated Hudson Hops & Harvest festival. (For anyone who hadn’t gone, it’s simply put that the farm-to-table food and craft beer fest was over-marketed and under-organized.) But the brewery’s mission statement was enough to lure me back northward for another sampling. 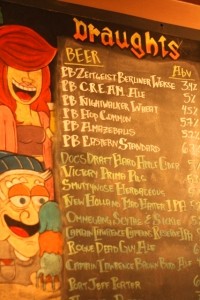 The special restaurant week prix fixe was laden with farm-to-table ingredients and biergarten flavors- think braised cabbage, roasted chicken, bratwurst.I was offered the choice between a fall salad, a parsnip soup with bacon and a pork rillette for an appetizer.  And hey – I had driven a quarter tank of gas worth with a devil-may-care attitude about refueling I was clearly up to a challenge. Rillette it was, my first experience with one, and challenge accepted I yielded my knife and… had my husband dive right in while I watched tentatively. Not only did he survive, but his expression brightened and reassured I slathered a healthy portion of the pate across the crusty toasted bread they provided, topping the whole thing with a dab of spicy, grainy mustard. The choice was tasty, but better yet the perfect pre-dinner nibble.

Compiling the toast was a fun little ceremony and the flavor profile were perfect tag-team compliments to our dinner conversation and the brewery’s tasting flight of house-brewed suds. We did, however, over-order and also sampled the home made salt and vinegar chips. I certainly wouldn’t turn my nose up at these if offered them again, but they were an unnecessary addition. Also, in this guest blogger’s humble opinion, once homemade chips cool down they’re really not all that different from any kettle cooked chip you might find in a bag. So we could’ve skipped those. 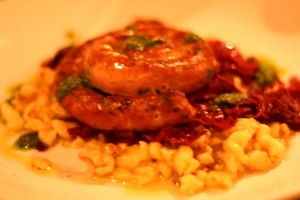 On to dinner, and I was eager to tuck in to another first for me – spaetzle. As an Irish/Italian American, I feel it is important – nay, my DUTY – to have a handle on all things carb related. The fact that I had gone thus far without tasting the German answer to buttery noodles seems downright negligent. My entrée was bratwurst nestled on a bed of spaetzle pillows and curled up next to a pretty pile of braised red cabbage. The whole shebang was topped off with a garlicky green chimichurri offering the exactly correct antithesis to the sweet bratwurst. 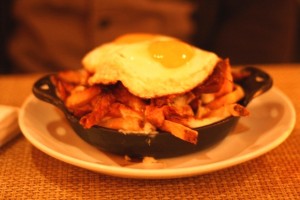 My husband – ever the menu renegade – went with his gut when it came to making his selection. Deviating from the prix fixe offerings, he chose instead to answer the ultimate siren song – poutine. The usual fries/cheese curds/gravy were there, but the brewery opts to use a mushroom gravy and offers optional additions to the tune of sunny-side up duck egg and foie gras.

We chose to only add the duck egg, but the results were nothing short of sinful. The dirty deeds continued when we both delved in to the chocolate sea salt pie I’d selected as my dessert. The salt only enhances the rich chocolate and the plate is finished off with a swirl of fresh whipped cream. Not much more to say about it except why are you still reading this? Get. It. Now.

With a locavore’s dream menu and a bar seemingly fantasized in to creation by the nerdiest of beer nerds, the fare at Peekskill Brewery could’ve been served to me via vending machine and I still would’ve left a changed (for the better) woman. But instead my grub was rustled up by the decidedly more warm and friendly than a vending machine, Laurie. From the moment we walked in, Laurie was genuinely ecstatic to have us there and was so knowledgeable about everything she put in front of us I DID question if she was part super-smart, mechanical robot. She made great suggestions while also being honest and admitting there was a menu item or two that we didn’t necessarily have to try that day. 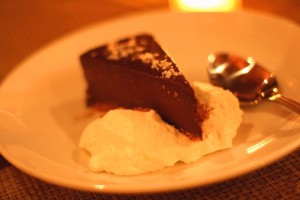 Just a warning, one trip here and you might never settle for less-than-Laurie service again.

The 411 on Peekskill Brewery.