Two words can easily sum up Harper’s – no brainer.

I’d had this Dobbs Ferry spot on my “list” – an ever-growing catalog of hot spots that I MUST try out – for a good long while. Their concept is simple – local food and drink in a bar scene setting. I’ve also already sampled a number of restaurants in the Dobbs Ferry area and being Pavlovian in nature, I sort of had the feeling that I would enjoy Harper’s based on the fact that it was in the picturesque river town alone.

Probably a silly theory, but it worked out! The place rocked. 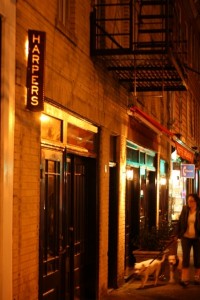 Unfortunately I have to start this tale on the negative, but it was essentially the only negative, promise – parking sucks. You’re at the mercy of street parking and while Dobbs is the sweetest little town you ever did see – it’s a little spooky at dinner time in the winter. However, I assure you this was my first and last complaint of the evening.

The front of Harper’s is bedecked with wrought iron details and heavy wood doors standard of any neighborhood pub. With my best pal in tow, I think we were immediately greeted by three friendly staffers eager to feed us. And we were definitely were eager to be fed.

Cutting to the chase and asking for the restaurant week straight away and I was not disappointed to see a myriad of hearty choices, pretty much all straight off the regular menu. A sucker for sprouts, I selected a Brussels sprout leaf salad with pancetta, truffle and the crowning glory – a poached egg. Not entirely certain the method in which the leaves were prepared but they were the best texture, a little toothsome and tough to the bite but not quite crispy and roasted, (which may have overpowered the other components.) The pancetta was perfectly salty and the runny egg was just the best version of salad dressing ever. 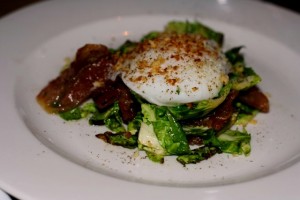 By this point, I was drooling for the next course and barely noticed I even had a dinner companion, let alone thought about the reason we were there (to toast one last time before she plays bride and I play bridesmaid this upcoming weekend.) We quickly clinked glasses as they brought our entrees and then disappeared in to the deliciousness once more. She’s one to always go for the seafood option and chose the fluke served on a bed of roughed chopped fall veggies like brussel sprouts and squash. The fluke was cooked perfectly without a hint of fishiness.

A really tasty dish, but paled in comparison to the one I chose.

I’ve only recently become acquainted with duck, but it’s been a whirlwind romance. When I saw a take on a cassoulet, I knew immediately that’s what I was going with. Duck leg with crackly skin served up on a bed of white beans, caramelized onions and even more pancetta. The skin was crispy as promised but the meat was tender and juicy. The beans were a really nice texture combo and were more than just an afterthought. 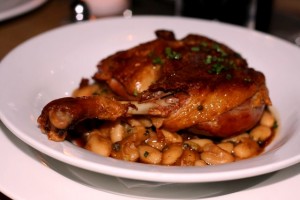 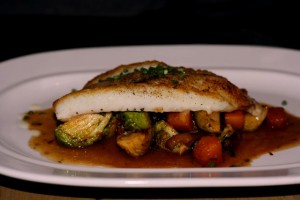 Finally, dessert. She went with the traditional crème brulee while I had to try the chocolate chip bread pudding. Both were certainly sweet and tasty options but our appetizers and entrees had knocked it out of the park while dessert was more of just a home run. Good moves regardless and the end notes were still sweet.

I also want to note that the cocktail menu reads like perhaps Harper’s employs a mixologist. [Note from Liz: indeed it does. We have a feature coming soon!] Though I didn’t delve beyond a tasty glass of red, the cocktail list intrigued me and I think any of the offerings would be a nice break from your run of the mill, watered down vodka cranberries. 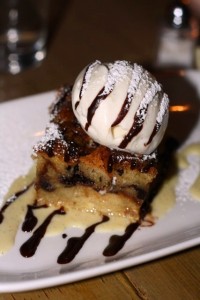 Harper’s has the right idea – its rustic watering hole setting draws you in but you stay for the food. I wouldn’t refer to the fare as pub food per say but fancy bar nibbles (like oysters, steamed mussels, etc) make an appearance. The real draws of the menu are the farm to table ingredients and the seasonally appropriate choices. If you still need convincing, the burger I saw delivered to a neighboring table looked like the juiciest, cheesiest mountain of edible delight I have ever seen.

Essentially, Harper’s has something for everyone in an approachable setting – a no-brainer choice.