Chat American Grill in Scarsdale has been of our favorites for outdoor dining on warm summer evenings, but Restaurant Week gave Judy and I a great excuse to dine indoors for a change.  We arrived about 7:30 PM and although the place was bustling we were seated immediately at a cozy table by the windows. 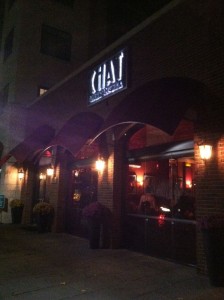 The Restaurant Week menu offered a nice selection of options from their very eclectic menu.  For starters I chose the soup of the day, which was a hearty white bean soup that was just perfect for a cold late fall evening. The soup was creamy and delicious, helped by the crunchy croutons sprinkled on top. 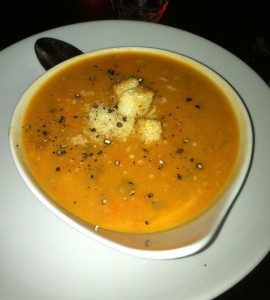 Judy is a seafood fan, so she could not pass up one of her favorites, Steamed Mussels.  They were prepared to perfection, and just the right portion size to leave room for the main course. 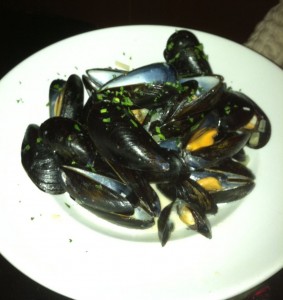 For the main course we both went the “pasta” route, though my choice was pasta in name only.  Chat has a marvelous Spaghetti Squash topped with vegetables, a nice option if you want something close to pasta but without the semolina.  It’s one of my favorites so I was glad to see it on the restaurant week menu selection. 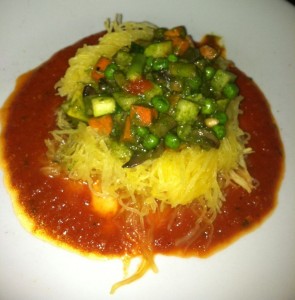 Judy continued with her seafood theme and ordered the Angelhair Pasta with Shrimp & Crabmeat.  The shrimp and crabmeat were cooked perfectly and the portion size was once again just right to allow some room for a bit of dessert.  The picture doesn’t do it justice. 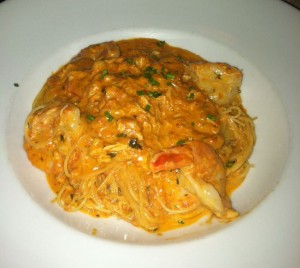 For dessert we decided to leave a bit of room for the next evening’s excursion as all this fine dining over the past week was starting to add up on the calorie side.  Judy and I split the Chat Bites, a wonderful variation of “donut holes” that are prepared with fillings are are served with two dipping sauces (fruit and chocolate). 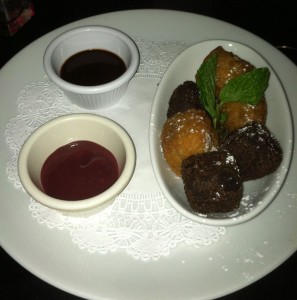 In addition to the wonderful food the service was attentive and courteous, and we were thanked and encouraged to return as we left for the evening.  We will certainly keep Chat in mind both in the coming winter months as well as once spring and summer return and the patio reopens.

The 411 on Chat American Grill.