People are reading
You are at:Home»Food Links We Love»CIA Recipe: Wounded Warriors Cook Healthy at CIA 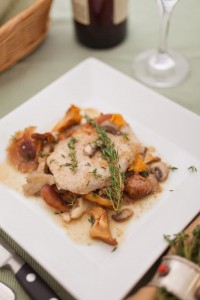 The Culinary Institute of America (CIA) and the United States military have a long and proud partnership. The CIA was created in 1946 to provide culinary training and careers for returning World War II veterans, and today continues to educate hundreds of military personnel from all branches in its degree and continuing education programs.

When the director of the Wounded Warrior Project (WWP) got the idea for a program to teach the organization’s members how to cook healthier food so they could improve their health and quality of life, he approached the CIA. That was when CIA Chef John DeShetler got involved. He presented the college’s ideas for launching a Wounded Warrior Healthy Cooking Boot Camp at the WWP health and wellness summit—and the program was born.

Chef “D” taught the first group of warriors in the CIA kitchens in Hyde Park, NY, and later groups at the CIA in Hyde Park and San Antonio, TX. The future of the program looks healthy, too—11 more classes are scheduled for warriors at the college’s New York, Texas, and St. Helena, CA campuses.

“The recipes we used in the five-day course were collected from several healthy cooking classes at the CIA,” says Chef DeShetler. “In this CIA Boot Camp, the veterans learn how to eat healthier by gaining an understanding of nutrition, learning to read nutrition labels, and getting tips on what to look for when food shopping. They experience team building in the kitchen and practice the basics of knife skills and various cooking techniques.”

The WWP’s mission is to honor and empower wounded warriors. It began when several veterans and their friends, moved by stories of the first wounded service members who had returned home from the current conflicts, took action. What started as a program to provide comfort items to wounded service members has grown into a complete rehabilitative effort to assist warriors as they recover and transition back to civilian life. For more information or to get involved, visit www.woundedwarriorproject.org.

Season the pork cutlets with salt and pepper. Dredge (coat) in the flour, shaking off any excess.

Add enough oil to a large sauté pan to come to a depth of ? inch and heat over high heat until the surface of the oil shimmers. Add the pork cutlets and pan-fry on the first side until deep golden brown, 3 to 4 minutes. Turn the pork cutlets and continue cooking on the second side until the pork is cooked through and the exterior is golden brown, 3 to 4 more minutes. Transfer to a warmed platter and cover to keep warm while completing the ragoût.

Pour off all but 2 tablespoons of the oil. Add the shallots to the pan and sauté over medium heat until translucent, about 1 minute. Increase the heat to high. Add the mushrooms and thyme and sauté until the mushrooms are lightly browned, about 2 minutes.

Add the stock and stir to deglaze the pan, scraping up any browned bits from the bottom of the pan. Return any juices released by the pork. Simmer over high heat until the liquid has reduced by about half, about 5 minutes. Remove the pan from the heat and swirl in the butter to thicken the sauce slightly. Season the sauce with salt and pepper to taste.

Serve the pork chops on a heated platter accompanied by the sauce.