Hi, Debbie Gioquindo, Hudson Valley Wine Goddess and in keeping with my theme of trying new places during the Fall edition of Restaurant Week I ventured to Farm to Table Bistro in Fishkill, NY.  We brought my mother along for this dining experience as she had never been their either. 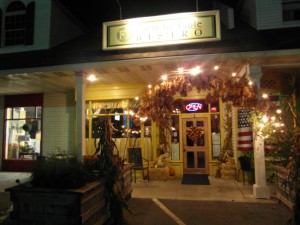 The restaurant is located in a shopping plaza along Route 9.  I really give them lots of credit for creating ambiance of being on the farm.  What you don’t see in the picture is to the right is a tractor. The chalk board on the left proudly welcomed Restaurant Week with the $29.95 menu offerings. 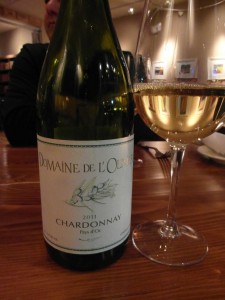 It was nice to see that they had Hudson Valley wines on their menu!  But we chose a French wine from the Languedoc region that was very reasonably priced and the host recommended it. (shh..don’t tell anyone)  The wine went so well with the Pumpkin Bisque my mom and I ordered!  It really brought the pumpkin flavor in the soup to the next level.  Wonderful food and wine pairings like that really get me excited! 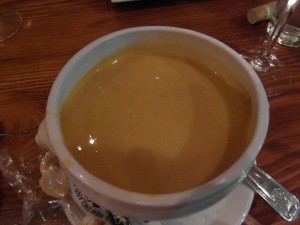 Paul decided to put his own theme for Restaurant week as there was Bolognese on the menu and that is what he ordered last week when we were out.  Trying all the Bolognese through-out the valley this time around…maybe I should  get him a score card? 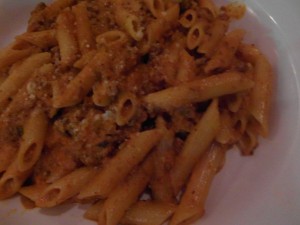 Once again I decided to move outside my comfort zone and I ordered the Angus Sirloin Meatloaf.  It definitely was not Alma’s meatloaf that I grew up on. (I don’t think I’ve had much meatloaf since those days) This meatloaf was pretty flavorful, stuffed with barbeque pork, arugula, Monterey Jack cheese served with a mushroom Madeira sauce. The flavors really blended well together and the sides were nice and crispy like I like them. 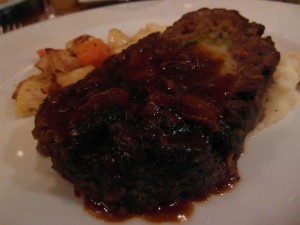 Mom had the Pan Seared Salmon with the horseradish crust and she enjoy it.  One thing I will say is that the portion size here is very generous.  We all brought home some of our dish for later.  Or in Paul’s case it was his breakfast the next day. 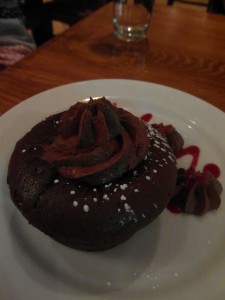 No meal is complete without dessert.  Mom went to town with the Dark Belgian Chocolate Mousse Cupcake.  She was in heaven, savoring every bite.  I did have a taste and it was really good! The presentation was great, almost to pretty to eat. 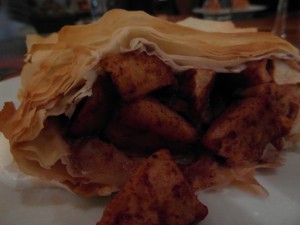 In sticking with the seasonal offerings, Paul and I had the Apple Croustade. It had a really nice flaky crust and the apple had nice hints of the cinnamon and nutmeg on them.  It was a little bit on the dry side for me, but that didn’t stop me from finishing it.