White Plains and I go way back.

I attended high school there many (well, not THAT many) moons ago and despite living in Northern New Jersey at the time, I still managed to spend a few nights of my early twenties running around Mamaroneck Ave. So when I heard rumblings referring to a fairly-well trafficked, but out of the way strip as “Restaurant Row”, my ears perked up. Basing my assumptions strictly on the type of establishments that traditionally have found homes in White Plains, I assumed the Row would be littered with more garishly decorated franchised restaurants frequented by teenage movie goers and pre-bar crawling noshers. I was colored pretty surprised when I found out I could expect the likes of a taqueria and a Westchester outpost of NYC’s own Butterfield 8. 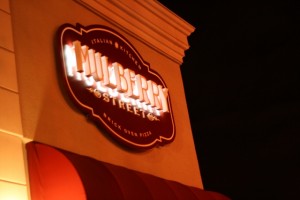 I rounded up the most appropriate dinner party I could think of – three friends from high school – and set out to tackle our old stomping ground’s new(ish) red sauce joint, Mulberry Street.

Driving down Restaurant Row (or East Post Road), I was able to scope out the other culinary offerings. The entire strip brings to mind one spot and bear with me now – Vegas… ok or maybe its Jersey counterpart, Atlantic City. But here’s why, while this slew of new eateries is a far cry from the chain restaurants typical of the area, there is still something very corporate about the lot of them.

My opinion didn’t waiver when I entered Mulberry Street. The place felt much less Little Italy than it did Cheesecake Factory. However, while the décor of the place did seem manufactured, the service was anything but cold and rigid door. Greeted by a gentleman who informed me they’d been waiting for me and my party, we were brought over to a table and served by an extremely friendly and competent waiter. 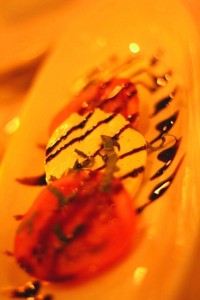 Three of the four of us selected the Restaurant Week menu, but all of the fare was exactly what you’d expect – parmigiana, baked ziti, brick oven pizza. For my starter, I snapped up a safe bet – fresh mozzarella and tomato drizzled with a balsamic reduction. I’m not a huge fan of this combo always, (sort of boring and cut to the chase – just give me the cheese,) but the tomatoes they used were mega sweet and I could’ve drizzled the reduction on toast, or ice cream, or any other vessel that would get the power-packed concoction to my mouth efficiently.

Our plates were cleared and not too much later, we were delivered all but one of our party’s entrees. Now, I’ve mentioned before I am an erstwhile chain restaurant server. While this does give me the unfortunate side effect of being a bleeding heart patron, it also allows me a little insight in to some of the behind-the-scene workings. Sometimes, yes, a server isn’t totally on the ball. Sometimes they might leave food sitting in the window, freezing, congealing and becoming more and more unappealing. But also sometimes things just happen. (And try to keep in mind your server has to take the brunt of it as they are your liaison to the kitchen.) But what our server did that night was exactly right – he didn’t miss a beat and immediately came over to explain, instead of leaving us to wonder letting EVERYTHING get cold. He also was honest that the missing dinner (a pizza) had made it in to the oven a little late and would need 5-10 minutes. No vague “be right out’s” and when the food came out in about four minutes, it felt like no time had passed. 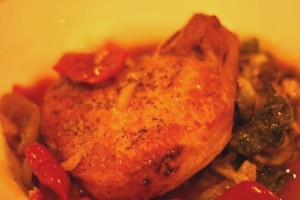 Two of us got the Restaurant Week pork chop entrée, a bone in chop with vinegar peppers over escarole. It was nothing special, but the pork was juicy and the peppers weren’t killer in the spicy department (which was a plus for me, but maybe not for someone expecting more heat.) As for the pizzas, hmm, tough call. They were edible, sure – good, even – but certainly nothing more than you might find anywhere else. In fact, not far from what you might get if you ordered a personal pizza in any chain restaurant that offers them.

Dessert was a bigger source of contention.

The good stuff first – our waiter offered the table up a free Tiramisu for having made us wait for the pizza earlier. The down side to that – the Tiramisu wasn’t… Tiramisu, that is. Again, going back to that bleeding heart thing, I liked the cake! It was a tasty piece of pastry with a delicious frosting of whipped cream. It just wasn’t Tiramisu, with its pudding-like texture, alcoholic after-bite and sweet notes of espresso. This disappointed my former classmates, even the one who’d scored her slice for free. In the end dinner was just ok, but I still want to give this spot a good review. 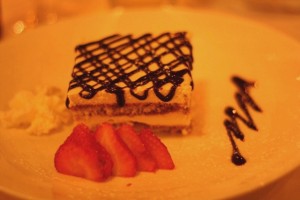 And not just because of the bleeding heart thing.

Yes, I have been spoiled with more home-grown, privately owned, “throw some in-season veggies on the menu spur of the moment”, establishments in Westchester, especially during Restaurant Week. But I think spots like Mulberry Street and its “Restaurant Row” ilk have a place here too.  White Plains is a busy little city with lots of entertainment offerings especially in that area. If you’re checking out the latest installment of Twilight, or celebrating a birthday at the local bars, all with a big group of people – you want a place like Mulberry Street. It’s spacious, offered great service and while its menu wasn’t spectacular, it was crowd please-y. From first glance and word-of-mouth (as I have not yet sampled them) the other eateries on this strip aren’t far off from the same idea either. I think the evolution of East Post Road is a very smart move for the area.

I am a huge advocate for the farm-to-table, home-grown concepts out there and love nothing more than to go on a good old fashioned culinary adventure. Those nights, I like my food to take center stage. But this particular day my trip was focused on a mini GCA Cougars reunion, and the food took on more of a background role.

For this, I appreciate the easiness of the menu and being in the good hands of our server at Mulberry Street that evening.