What to do with leftover turkey? How about making some arepitas!

Being in the kitchen the day after Thanksgiving is not something that lures many people (beyond cooking nerds like myself!). Still, well, we’ve got a lot of food—thankfully—and would like to consume it, or have it consumed! As I’ve mentioned before (mostly on my other blog, In the Kitchen with Arlen), leftovers need some reinventing. So, how about creating a turkey dish, with a Latin twist? Options are numerous, and I don’t want to send you running to the store for too many things, but I’d like to share one idea: Arepas with Turkey.

What are arepas? They’re Colombian corncakes—and actually I wrote about them for this blog (Latin Twist arepa recipe) way back in August.

But this time, I’m strongly suggesting something: that you buy the arepas if you have had enough of being in la cocina and not really into shopping for numerous ingredients! And the recipe I’m sharing here can easily be adpapted for tortillas (turkey quesadillas are also wonderful!).  You can also add other veggies that you’ve got in your fridge. Again, the sky’s the limit!

What to sip on while you eat your day-after-Thanksgiving treats? Sangría of course!

In fact here,  my friends, I’m sharing a video of the sangría I made live on Telemundo yesterday morning!  (Arlen’s Sangría on Telemundo!) 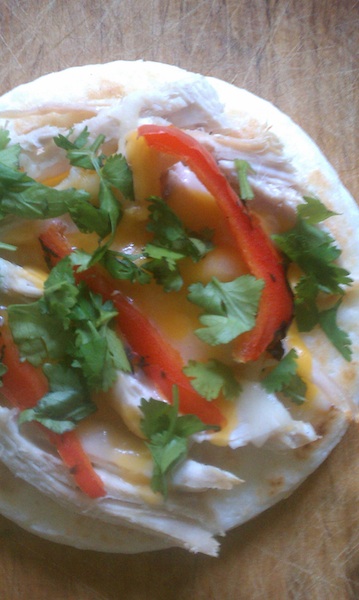 Simple and sabroso (tasty!), this leftover turkey arepa is a great way to reinvent some of your dinner from yesterday's meal! And remember--you don't have to use leftover turkey; you can also make this with shredded chicken, pork--or simply cheese and veggies. ¡Buen provecho! Enjoy!