Hello this is Margaret Rizzuto doing my last review for Hudson Valley Fall Restaurant Week.  What a a few weeks its been with Hurricane Sandy and then the snow storm.  I think we all felt the challenges from the weather, including the restaurants, but Traditions turned out to be a nice respite from it all.  I’m not sure what I expected when we went there but I guess, in the back on my mind I was thinking traditional, kind of old school food and menu.  Let me repeat the adage we all know very well, never judge a book by its cover or in this case, by its name.  While several of the dishes are indeed traditional “grandparent’s” recipes, the creativity and use of ingredients made the food anything but old school.

The restaurant week menu had a very nice offering of seasonal items as well as some of the restaurant favorites.  As a starter my husband had the Calamari 118 which he really enjoyed, he thought the mix of sweet and hot peppers on top lent a rich flavor to the dish.  Calamari is always a good “test” food, I’ve had it so often overcooked to the point of rubbery but happily, this wasn’t the case here. 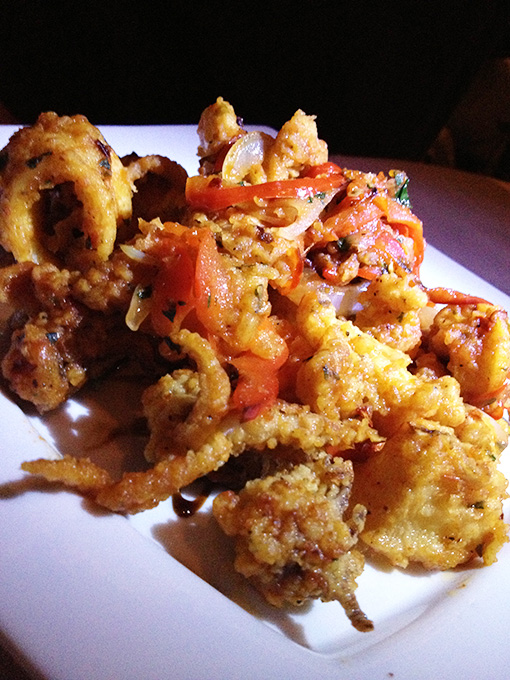 Since I don’t eat meat, I asked if I could have one of the appetizers as my entree so I started with Pumpkin Ravioli which was decadently divine with a rich but not overwhelming cream sauce.  It was nicely seasoned with sage and I liked that the pumpkin filling wasn’t overly sweet.  My son ordered off the regular menu and started with Mozzarella Squares with Marinara Sauce which he enjoyed.  There was a nice crunch to the coating and the sauce was very tasty.

We then had New Orleans Paella, Gnocchi with Tomato Sauce and I had the Eggplant Stack appetizer as my entree.  The Paella had generous servings of seafood including PEI mussels, little neck clams and shrimp.  There was a nice spice to the tomato base but not to the point where you couldn’t taste the rest of your meal.  My son fancies himself a gnocchi connoisseur and always orders it  whenever he sees that they are home-made, which these were.  The were light and served with a delicate tomato sauce — he cleaned his plate, need I say more about that dish.  The Eggplant Stack, in my opinion was the highlight of the meal.  The eggplant had the most delicious, crispy coating — did I say crispy — they were so crispy, I absolutely loved them. They were served with mozzarella, plum tomatoes, basil and arugula with a nice aged balsamic reduction drizzled on top — I’ll definitely have this dish again. 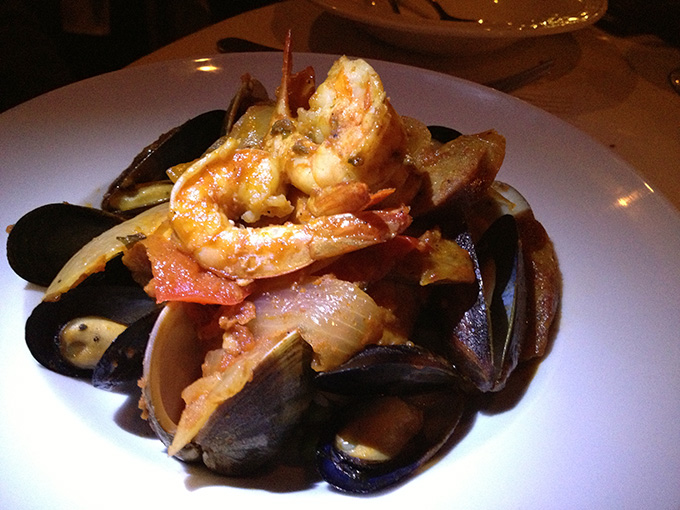 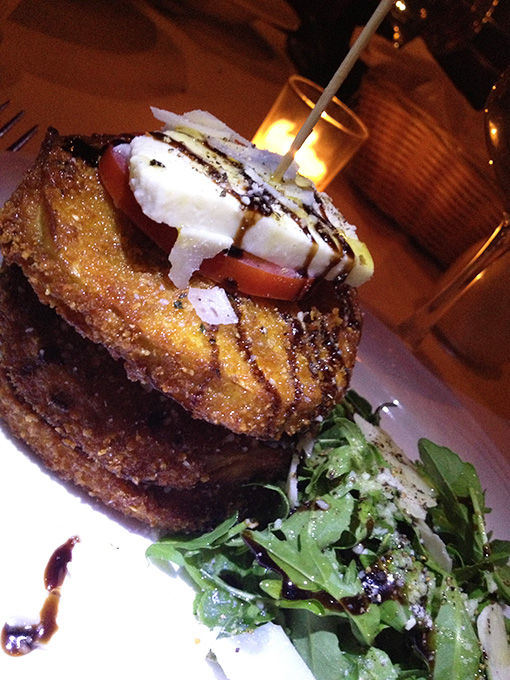 Dessert, which we barely had room for but all ate once it arrived was Zeppole Puffs that were so light. When I asked about them I was told they were actually more like the French beignet which made sense.  Zepollis can sometimes be heavy and these were so airy, small and had just the right amount of crispiness around the edges. They were served with a lovely chocolate butterscotch dipping sauce – mmmmm . . .  We also had an Ice Cream Crepe that was filled with vanilla ice cream with a wonderful puree of chocolate, raspberry and fresh cream — yes, we pretty much had to roll each other to the car. 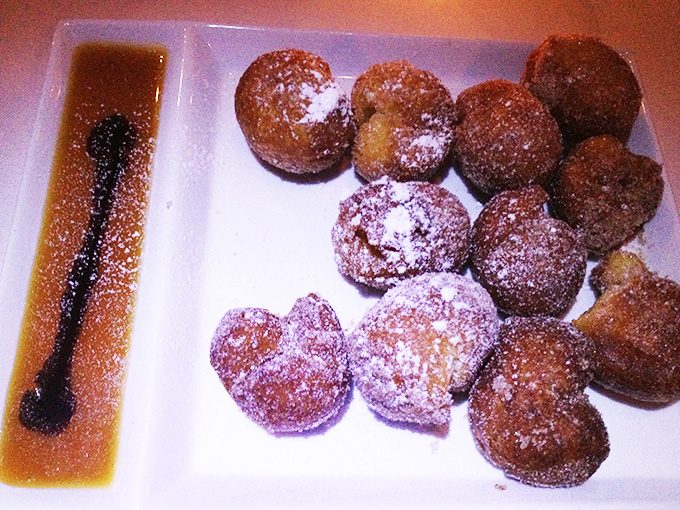 Our meal was delightful, the service was great and the roaring fireplace was a perfect accompaniment to a lovely meal.