People are reading
You are at:Home»Cooking»Christmas»Rosemary-Hazelnut Encrusted Seitan for Vegan Holiday Meals

I love holiday meals- they just feel so special. Though Thanksgiving has already passed, many of us will be having more holiday meals in the weeks ahead!

I just spent the Thanksgiving holiday at my mother’s home, where my mom bought me a vegan holiday roast, and made most of the side dishes vegan (of course, I helped). When I was talking with some acquaintances about going there, someone asked, “your mom will cook vegan for you?” I was a little floored- but I smiled and answered, “of course she does. My mother loves me.” Why wouldn’t my mom make sure there was something I can eat at Thanksgiving?

I’ve been at this whole vegan thing for a few years now, so it’s pretty much a given that there will be vegan food at holiday gatherings with my family. I’m sure that it helps that I do a fair amount of the cooking with my mom, but making sure that the side dishes are vegan is usually pretty easy- it just takes a little substituting. Butter is easily replaced with vegan margarine and/or olive oil, cow’s milk can be replaced with soy/almond/coconut/rice milk, and chicken/beef/turkey broth can be replaced with vegetable broth. This can cover basic vegetable side dishes, mashed potatoes and stuffing (cooked on the side, not in the bird). Vegan gravy is as simple as a roux (with vegan margarine) and a tasty veggie broth. That pretty much covers the side dishes- but what of the main event?

There are of course, several commercially available holiday “roast” dishes out there- and some of them are pretty tasty. They don’t take much effort (follow package directions for baking and seasoning) or special know-how to make. I think most people have heard of Tofurky at this point, but there are also vegan roasts available from Field Roast and Gardein, all of which should be available at Whole Foods and Mrs. Green’s, or other natural foods markets. There are other brands out there too- just make sure to check the label to make sure it’s vegan and doesn’t contain any eggs or dairy. Quorn, for instance, makes a vegetarian roast, but not a vegan one.

I for one, would be thrilled and touched if I was going somewhere other than my mom’s and the host was serving a Tofurky or other vegan holiday roast. There’s no need to make something fancy. But what if you’re the kind of person who really wants to?

There are recipes out there for making your own vegan stuffed roast. I’ve tried one, and mine didn’t come out so great. I might try it again some time, but that also begs the question- do the holidays have to involve a stuffed something? To me, they don’t. Some of the best holiday meals I’ve had have featured pasta as a main dish. A couple of years ago, I had an all Asian-inspired holiday meal. It’s okay to think out of the box!

There are also some nice fall/winter-flavored vegan dishes out there. My favorite has been a Rosemary and Hazelnut Encrusted Seitan dish. I’m providing a recipe for making your own seitan, but you can certainly use store bought. Or, if you don’t like seitan or can’t find it, you could use tofu (pressed and drained) in its place.

Whatever you have for the holidays- don’t stress when it comes to having a vegan guest! Many of us will happily eat plain vegetables if that’s what you can offer. 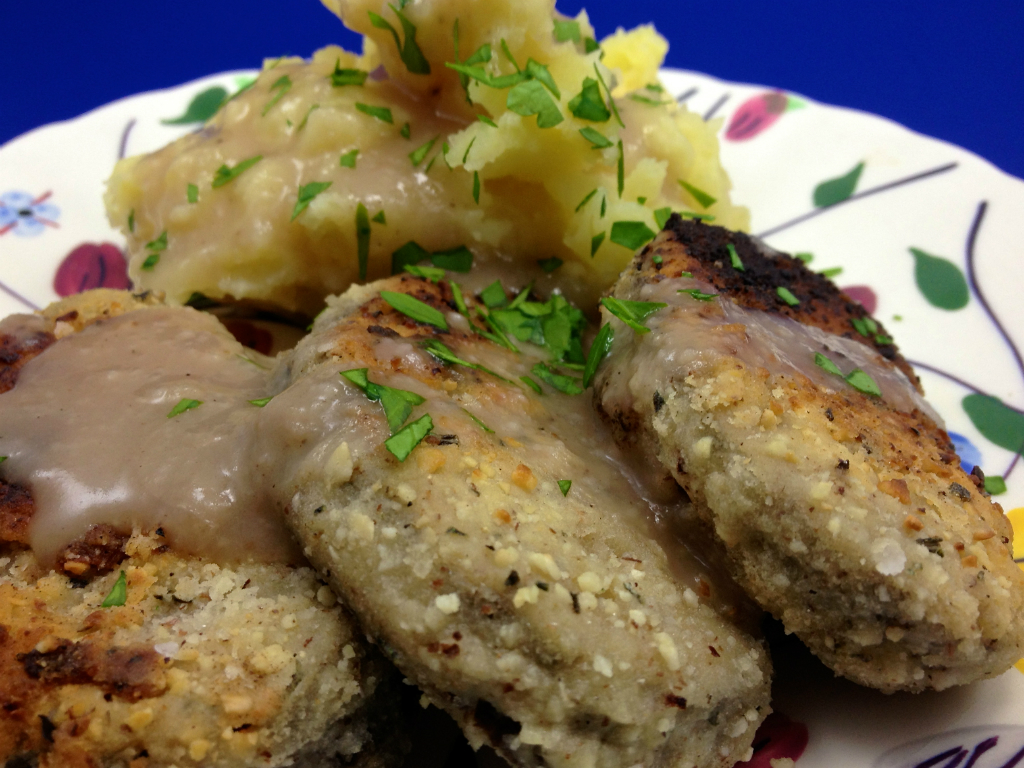 For the Seitan:
For the seitan broth:

Make the seitan:
For the coating: